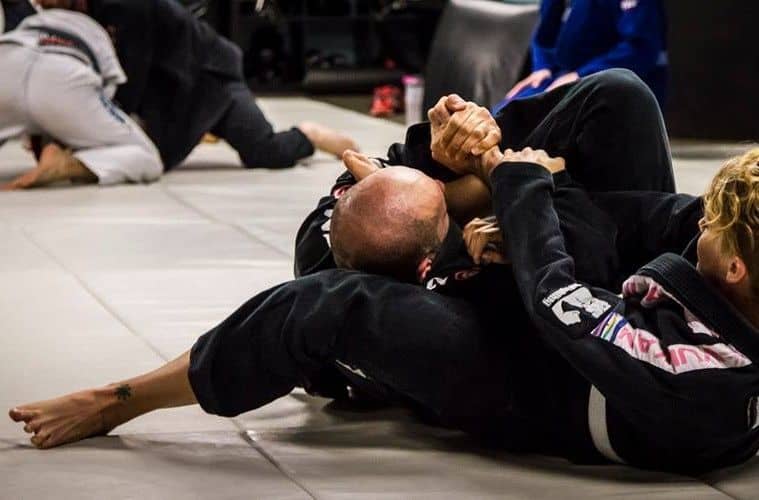 Let’s face it. Every Jiu Jitsu practitioner is looking for something to add to their arsenal. With a multitude of ways to mangle, suffocate and disable an opponent, it can sometimes be prudent to go back to basics and apply an ancient, yet powerful submission: The Armbar.

The Best Armbar Instructionals – Get 10% off with the code ATBK10

You have to go back to ancient Greece to see artwork and historical references to submissions. Although Grappling has existed for thousands of years, going as far back as 15000 BC, it wasn’t until the ancient Greeks came along that we began to see submission holds incorporated into grappling. With their wrestling and pankration (meaning all-force), the Greeks applied and recorded submissions such as armlocks and chokes. Unfortunately, not much imagery on the technical aspects of the submissions has survived.

With regards to Brazilian Jiu-Jitsu, the armbar has had a prominent role as a submission of choice for many practitioners, including Carlos Gracie Sr. The armbar was so effective that it became extremely popular around this time. The closed guard to armbar setup became widely utilised in the jiu-jitsu world. Being applied from full guard, the armbar setup from bottom became a saviour submission for any practitioners who frequently ended up on their back, or those who favoured a defensive, reactive style. It is perhaps noteworthy that the armbar, although popular from top position, became most popular in the early days from a full guard position. This may be due to the positional sacrifices one would have to make from the mount position. It would be more stable and secure to apply an Ezekiel choke or a cross choke from mount as it allows the practitioner to remain in a dominant position, whereas the armbar takes the pressure and weight off the opponent and allows them space and time (depending on the attacker’s speed) to make an effective escape.

The armbar is also a favoured defensive submission for those who come under attack outside of the gym. When attacked in the street for example, or by a much larger opponent, the practitioner may end up on their back (hopefully in full guard). From this position, the armbar is particularly effective against an untrained, larger opponent. An attacker who is untrained is generally unaware of their arms crossing the centre line, or what their arms are doing at all. This lack of defensive awareness in regards to the attacker’s arms makes the armbar the perfect defence, especially for the smaller opponent. The triangle choke, for example, can often be negated if someone has large enough shoulders and they’re being choked by someone with relatively short legs. The armbar, instead, isolates an arm, and even the largest attacker cannot defend a single arm against the technique of a trained individual who can utilise their full body against it.

The armbar has had frequent success in Jiu Jitsu competitions and in MMA all over the world. Notable armbar specialists in the Jiu Jitsu world includes Rodolfo Viera, Roger Gracie, Alexandre Ribeiro, Andre Galvao, Marcus Almeida and Rafa Mendes. It has recently become a submission with a lot of attention in MMA due to the popularity of armbar machine Ronda Rousey. Coming from a Judo background, Rousey makes excellent use of the armbar from various positions, especially once she has an opponent’s back after a throw. Being a Judoka she can throw an opponent, catch their arm, and keep it as they fall and then apply the armbar with minimum fuss.

Though it is not only Rousey who has displayed armbar prowess and success in the MMA world. The armbar is the most utilised joint lock submission in MMA today and possibly competing with the rear naked joke in overall utilisation. Royce Gracie popularised the armbar in MMA first, as well as bringing the UFC and Brazilian Jiu Jitsu into the light. His elder brother Rickson fought in Japan more than America and frequently won bouts via armbar. Fedor Emelianenko, considered one of the greatest fighters ever, was also known for vicious armbars in the ring.

The armbar may very well be one of the first submissions taught to beginner students, but this does not diminish its power or standing in Jiu Jitsu. It has long been understood that consistent practice and honing of the fundamentals is the road to mastery of a discipline. This could not be more fitting for the armbar. Deceivingly simple, it can often be relegated in place of more fancy submissions or even sweeps. However, the history of Jiu Jitsu and MMA shows that the fundamentals are fundamentals for a reason.

How to do an Armbar

In this position, we’re going to look at an armbar from mount. The armbar from mount or Jiji Gatame, is a classic attacking position in Jiu-Jitsu. However, it is also a position that is lost easily as the opponent escapes an elbow during the armbar attack. To stop this from happening, you must first look to control an arm before initialising the attack. Here we will show you how to start the attack by first isolating a single arm with your hands, and then your bodyweight. This will dominate the arm into an attackable position. The armbar is best caught when it is done slowly and methodically, it is also a lot tighter as a submission.

Below is a video instructional from Firas Zhahabi, which goes through the same details.

We’re now going to look at the second most common position for getting and armbar in Brazilian Jiu-Jitsu, from the guard. The armbar from guard really is one of those beginner bread and butter techniques that every Jiu-Jitsu practitioner should be practising. However the mechanics of it can confuse some people, including myself when I first started to learn it, but let’s break it down into it’s fundamental movement pivot, the hips. Like many other moves in BJJ the hips are key when it comes to getting a clean, tight armbar from guard, the more fluid you are with your hips, the easier the catch. Let’s take a look at how to perform an armbar from the guard

The belly-down armbar is often caught from your opponent turtling or from a transition during the armbar from guard where your rotate your body further than 90 degrees past their hip line. Here we’re going to about how to can quickly snatch an unsuspecting armbar when your opponent turtles up. The belly-down armbar is a bit of a last-ditch move, something that should be attempted if you’re down on points and desperate for the submission against a dying timer.

Below is Ryan Fiorenzi teaching his variation of the belly down armbar from the back, with uses similar positions as the ones described above.

The straight armbar is a variation on the armbar, where instead of using your hips as the fulcrum to cause the hyper-extension, you use another limb. Normally your own arm. Here we talk about performing a straight armbar from guard.

Below is a video explaining the straight armbar in more detail.

The flying armbar is one of the most spectacular moves in mixed martial arts and Brazilian Jiu-Jitsu. If performed correctly, it’s an instant tap and submission. Here is Firas Zahabi explaining the finer details of the flying armbar. To effectively finish this position, it is highly recommended that you know how to finish an armbar from guard. The rest is about timing and confidence.

The helicopter is a flashy move that was first introduced by Gracie Barra black belt Braulio Estima. Used correctly, it allows you to surprise your opponent with a fantastically quick submission. This is an advanced technique, so before performing this, you should already know how to perform a standard armbar from mount as the finish is identical.

Check out this video, which goes into the finer details of finishing the helicopter armbar.