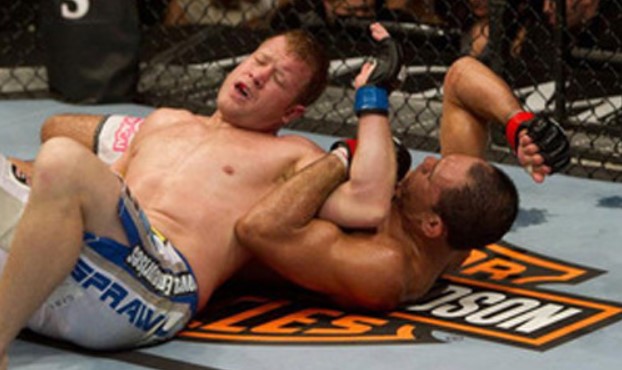 The crucifix is a good way to take your opponent’s grips out in the equation. It allows the player to get submissions such as chokes simply because of the lack of hands that defend the neck. However, the crucifix is also a good entry for wrist lock and armbars. Some setups are even subtle.

What makes the BJJ Crucifix Practical?

The crucifix is also a good way to control an opponent especially when you are ahead and up comfortably on points. This can be a good way to also rest and breathe.

And if your opponent even thinks of escaping the crucifix, this becomes a tricky proposition because he or she may leave attacks to happen.

Apart from the traditional crucifix, there is a variation that can be used along with a neck crank. This variation isn’t exactly common in Brazilian Jiu Jitsu settings because neck cranks are illegal. However, it has made its appearance in the UFC when Jerry Bohlander subbed Nick Sanzo in UFC 12. This type of crucifix can come from a side mount. You can windshield wiper and eventually get your legs on top of the opponent’s arm (the arm that would frame). Next, you will have to weave your arms underneath the opponent and catch the farside arm to create pressure on the spine.

Catching someone in the crucifix position is advantageous in MMA especially because you can get shots unanswered. There are even instances when the referee could step in because the opponent isn’t intelligently defending himself or herself.

Setting Up The Crucifix From The Stand Up

One of the more common ways to set up the crucifix is when you defend the takedown successfully. When the opponent tries to shoot, it is crucial to break any hold on your hip or your legs by sprawling your legs back. Next, it is important to choose one arm that you can trap. In some instances, you can also push the head down to the mat to make sure that he or she can’t recover to regain the posture.

Switch to the side where you want to catch the arm and establish your hook. The hook usually comes from the side nearest your opponent’s shoulder. You can triangle your legs to trap one arm in between your legs. And as for the other arm, you can have your Kimura grip.

However, this isn’t the only configuration that you can go for. It is also possible to trap the arm using the one closest to the hip. If you opt to use this setup, you also have the opportunity to go for a sneaky armbar using just your legs. If you want to have one arm free, you can opt to not use a kimura grip. You can use the hand that is closest to the hip to grab by the arm and push your opponent’s arm towards the body. This opens many opportunities such as going for the neck. Also, it becomes easier to roll for a crucifix with your back on the mat because you removed the opponent’s posting hand.

Submissions From The Crucifix

There are several submissions that you can come up with if you opt to go for a crucifix. If you have your near the shoulder free, it becomes a good option to go for a collar chokes in gi. However, setting it up in nogi can be a bit different. To expose the neck, it is important to get the opponent to bridge. To do this, you need to find the configuration where you can attack a key lock on your opponent using your legs. If you can’t get the tap, the most common reaction of your opponent is to load their weight on your body and do a bridge. This will usually expose the neck making it easy to go for a rear-naked choke from the crucifix.

If it is impossible to go for an Americana from the crucifix to expose the opponent’s neck, it is also a good idea to attack the wrist. You can do this by grabbing the palm instead of the wrist. You have the option to use both hands to make it look like you are going for the wrist lock. It is a common scenario that the opponent will also bridge to try to find the leverage to relieve the pressure from the wrist. And from here, you can go for the neck once it becomes available.

Armbar is a sneaky attack from the crucifix. If you can straighten the arm using your leg that is closest to the opponent’s hip, it becomes possible to hit a quick armbar.

The Kimura trap and the crucifix go hand in hand. From the crucifix, it is a common control to use the kimura grip. But with your legs busy trapping the other arm, it becomes hard to finish the shoulder lock from this position. However, it is easy to release the arm trapped by the legs. You can easily escape your legs and fight for the top. As long as you can keep the opponent’s arm on his or her hip, it becomes harder for him or her to fight for a better position. Here, you can go for the Kimura or even decide to go to the back.

It is also a common question asked by a lot of grapplers how to efficiently escape the crucifix. A good way to escape the crucifix is to load yourself towards your opponent and be able to shoulder shimmy out once your shoulder reaches the mat on the other side. It’s the same move done by Andre Galvao when caught in a crucifix by Buchecha.

The crucifix is a powerful position in grappling. It leaves you prone to different attacks given the fact that both hands are taken out of the equation. With many attacks a few escapes and counters from this position, it’s something that you want to add to your arsenal.

The crucifix is a niche position, and when a competitor is good at it, they can normally dominate their competition with it. Similar to Keenan and his lapel guards.

Enter Matt Kirtley and his “Mastering The Crucifix” DVD at Digitsu. Black belt Matt Kirtley will take you back attacks and crucifix attacks to the next level with this instructional.

This DVD goes through a huge range of techniques around this particular position and features over 50 techniques for you to learn and perfect!

If you’re interested in learning this dominant position, check it out at Digitsu today and get 10% when you use the code ATBK10.