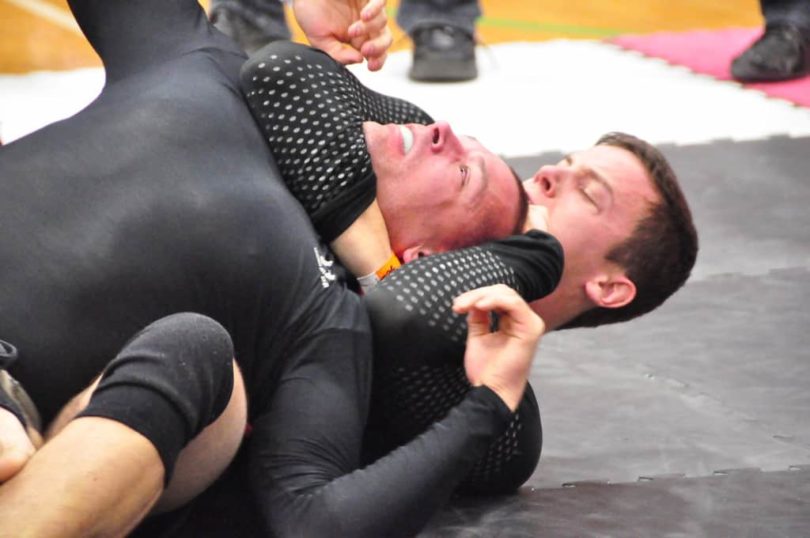 It has been called the ‘king of chokes,’ Mata leao (or Lion Killer in Portuguese), hadaka-jime in Judo, or the submission that can bring a man closest to death. The most deceptive and deadly submission in any jiu jitsu practitioner’s arsenal: The Rear Naked Choke.

The rear naked choke (RNC), also known as ‘the naked choke’ because it doesn’t require a kimono to apply it, is perhaps the most perfect choke for putting someone to sleep. The choke is applied when the attacking practitioner wraps one of their arms around the opponent’s neck, positioning the crook of their elbow just below the opponent’s trachea, in line with the Adam’s apple. The attacking practitioner then uses their hand on the arm around the opponents neck to grab their own bicep on their free arm. The forearm of the free arm then slides behind the opponent’s head and the palm is placed either face up or face down onto the back of the opponent’s head. The attacking practitioner then squeezes and uses their back muscles to fully apply the choke. It is important that the practitioner uses their core and back muscles to apply this choke as opposed to just their arms. It is common for beginner students to focus on squeezing their arms only, which tire easily and then remain tired for some time. Anyone who has been on the receiving end of a rear naked choke knows the feeling of tightness and claustrophobia it can cause, and when properly applied with the full body – it doesn’t take long for an opponent to be rendered unconscious.

The rear naked choke is an interesting submission because of its apparent limited use. It would first appear that the RNC would be a submission that is rarely used due to only being available from one position: the back. However, despite this restriction, the RNC continues to dominate submission statistics in MMA every year, and is very common to see it in many Jiu Jitsu competitions. So, why is the RNC so popular and utilised in grappling and MMA? It is perhaps the position from which it is applied that aids in its abundant use in competition. Taking someone’s back and maintaining the position feels like a victory it itself, and it is a position from which a lot of control can be asserted. In Jiu Jitsu rolling sessions across the world, you will find students happy to take and maintain back control for an entire roll. This is generally not due to tiredness or laziness, but rather a battle of will taking place on the mats. The attacking student who has the back does not wish to lose such dominant control and will continue to seek the seemingly elusive rear naked choke. The defending opponent, unable to escape, will seek to stop the arms getting a hold of their neck at all costs. Sure, the attacker could see that the choke is hard to attain and switch positions to the mount or side mount, where the armbar, kimura, collar chokes etc. are all available, but that is the rear naked choke’s allure. It can pull you in once you have back control, and you don’t see or want anything else. The RNC instinctively feels like the ultimate choke; the submission that screams domination and total victory over an opponent. It symbolises death, and that is perhaps why is finds itself as one of the most popular submission despite it having a low number of positions in which to apply it.

Like many submissions in modern use, the rear naked choke has existed since the early beginnings of grappling. It’s Portuguese name ‘Mata leao,’ meaning Lion Killer, stems from the 1500’s with the Sebald Beham painting ‘Hercules Killing the Nemean Lion.” This naming of the choke is said to be from Reylson Gracie who choked out Mas Oyama (founder of Kyokoshin Karate) from the back. Reylson apparently saw Mas as ‘a lion’: a fearsome and strong man to be respected. After submitting Mas via a choke from the back, Reylson effectively became a ‘lion killer’ and the name of the choke was born from there.

The choke gained its large popularity via its demonstrations to the public in the early MMA shows e.g. Pride FC and the early UFC. Rickson and Royce Gracie particularly favoured this choke in their MMA bouts and the choke can also be seen on the early Gracie Challenge videos. The Gracie’s would fight willing participants of various martial arts to prove that their system of Jiu Jitsu was superior. The no holds barred fights would often end with one of the Gracie’s back mounting a clearly confused opponent, and gently slapping their head before finishing the fight via rear naked choke.

Besides the Gracie victories in their challenge tapes and early UFC bouts, the rear naked choke is still an extremely common way for a fight to end today in MMA or high level Jiu Jitsu competiton. Some rear naked choke masters are: Marcelo Garcia, Rickson Gracie, Royce Gracie, Roger Gracie, Kron Gracie etc. The rear naked choke has acquired its reputation for being deceptive much more in the MMA world than in Jiu Jitsu. More skilled, tougher, and larger opponents have been bested by smaller and weaker opponents via RNC in the octagon. A most recent example: Holly Holm was defeated by Miesha Tate via rear naked choke for the bantamweight title. It is notable that one of the best rear naked choke practitioners in the jiu jitsu world, Marcelo Garcia, is also small when compared to his opponents. Like the stone that David used to conquer Goliath, the rear naked choke can be the ultimate weapon against any opponent. As it has been mentioned before by various commentators, even the strongest opponent; with the biggest arms, a granite chin and endless cardio can’t prepare their neck for a correctly applied choke. And no choke can be applied to the throat as cleanly as a rear naked choke. So why are you still reading? Get on the mats and practice those chokes!