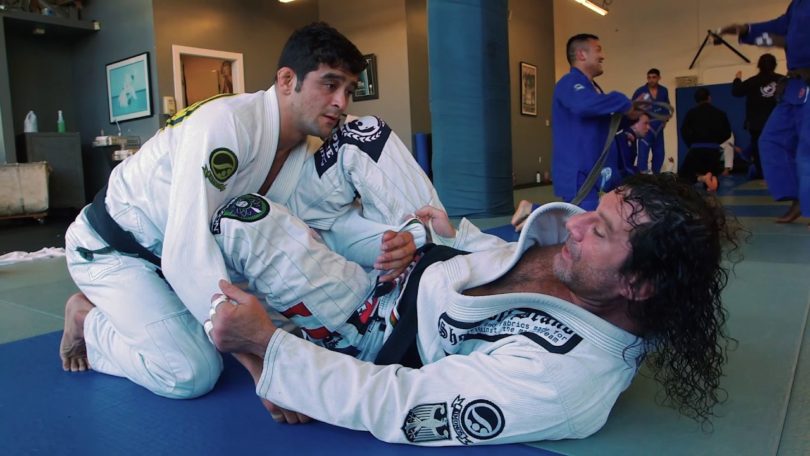 Lasso Guard is often used not only during spider guard but also with other types of guards. It can be a good way to add a layer to your Dela Riva guard, or when you opt to play a collar and sleeve guard. The lasso can serve a different purpose depending on the situation. The lasso guard can be used to keep the opponent center while it can also be used to actively off balance or even sweep an opponent.

There are different types of lasso guards that you can play. You can go for a shallow lasso, a deep lasso, or even a lapel lasso. Each has its pros and cons and why guard players opt to use them.

Deep lasso is a more difficult configuration of the lasso guard. It can give passers trouble to unwound the deep lasso compared to the shallow lasso. The deep lasso latches on the opponent’s lats. Plus, by centring the hip, the deep lasso becomes heavy.

To perform the deep lasso, you will first need to have a sleeve grip. Next, you must scoot your hip first before getting your leg over the opponent’s arm. The instep will latch towards the opponent’s back before you can centre up. You can also make it harder for the person on top to circle out the hand by placing your knuckle right on top of your thigh.

And lastly, lasso guard can also be applied on the lapel and not just on the arm. The lapel lasso is usually a prelude to complicated lapel guards such as a worm guard and a squid guard. To perform a lapel lasso, you will have to treat the lapel as if it is your opponent’s arm. The more common way is to scoot and to get your leg over the lapel. Next, you want your instep to also latch on the opponent’s back before centering up. Other times, guard players simply weave the lapel under the leg.

If the opponent has a strong base, you can pull your knee on your lasso leg close to your body and make the hip hit the mat. Here, you can do an inversion to go for a berimbolo. In some instances, you can also opt to not let go of the lasso and fight for top and you instantly have the omoplata.

If you pick a shallow lasso, it is possible to get a sweep by opening your knee and turning your hip towards the side. With no base to post, the opponent has no other choice but to concede the sweep. However, this sweep only works when your opponent is in combat base and when you torque the opponent’s ankle.

It is also possible to attack the opponent from a deep lasso. Here, you have some good options. If the opponent goes on a combat base, you can remove the reverse Dela Riva hook and let the lasso connect as a Dela Riva without removing the lasso. To finish the sweep, you will also have to switch your hip on the side.

In some instances, you can also roll with a deep lasso when you remove the Reverse Dela Riva. Here, it becomes easier to hit the omoplata against your opponent.

The triangle and the omoplata are two of the most common submissions that you can get from the lasso. If you have a deep lasso, switching your grip from the sleeve to the tricep area of your opponent will give you a chance to isolate the shoulder and have your omoplata. It works well if you are starting with a collar sleeve attack. The grip by the collar serves as a means to break the posture.

Triangle is also a possible attack when you have a deep lasso. You can grab the tricep and get your opponent’s arm over your knee line. The other leg instead of locking an omoplata will have to go over the shoulder.

From shallow lasso, it is also possible to go for a tricky triangle setup. Felipe Andrew does this kind of setup when the opponent has staggered legs. He did this type of setup against Keenan Cornelius and even against Lucas Barbosa in nogi. He does a shallow lasso on the same side where the opponent’s leg is behind.

Next, the other side has a spider but with the knee contracted tight to the guard player’s body. To get the triangle, Felipe Andrew unwinds the lasso and connects the leg by the lat or even by the hip. He then lifts his hips and breaks the grip on the side with the spider guard. The leg will then clamp on the shoulder and he will catch a triangle from there.

The lasso game is not only for keeping the passer on your center. It can also be used as an active way to attack and go for sweeps.

If you’re thinking about levelling up your Lasso Guard, then there’s one person who you need to go to, Tarsis Humphreys. In Tarsis’ instructional “Lasso Guard: The Complete Game Plan”, he helps you build an incredibly strong lasso guard game with layers upon layers of attacks, recoveries, sweeps and more.

This instructional comes via Digistu’s on-demand service, as a DVD to keep, and features over 20 techniques to help you improve your lasso guard.

Pick up your copy at Digitsu today and use the code ATBK10 for 10% off.