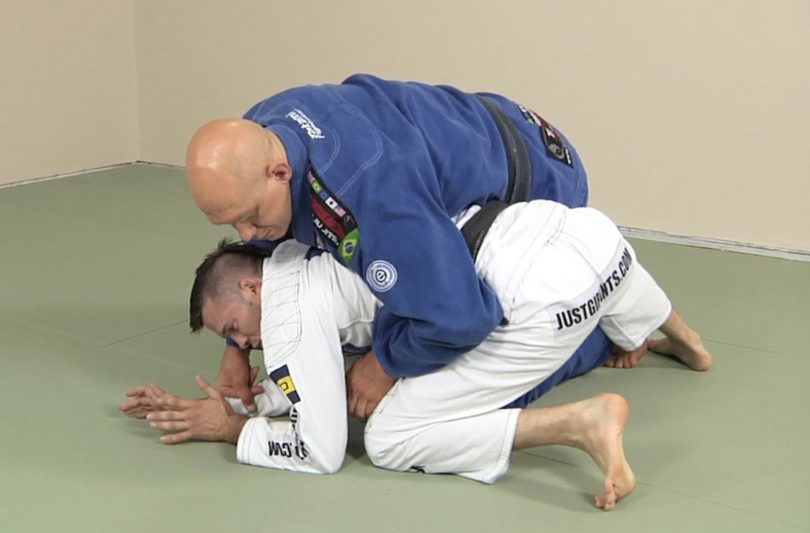 Attacking the turtle position is a matter of three variables: keeping your weight on the right parts, achieving your optimum grips, and attacking at points your opponent isn’t expecting or can’t defend. When you are looking for points, or a finish, taking the back is a great option from the top of the turtle position. So how do you force such a conserved opponent into a splayed out, terrifying, controlled position? It comes with opening them up and forcing them out of their tight positioning.

So what do you need to focus on for this position? Let’s break down the three basic ideas, and then go into some more details about the back take.

Keeping your opponent from immediately replacing his guard requires you to keep good weight on him. In the turtle position I like to think about keeping my weight in one of two places, on his shoulders or on his hips. Since this back take is from the side and behind your opponent, focus on keeping your weight on his hips. The more you can keep him from turning into you or rolling, the better. In the video, the instructor talks about keeping your hip pinned to your opponent’s hip. This is a great way to ensure your weight is on your opponent. When you start moving into position for the back take, remember to stay as heavy as possible. Your opponent will feel you moving and can take advantage of any lightness to make an escape.

A great way to practice keeping weight on a turtled opponent is by having a training partner sit stationary in turtle, and just rotating with your chest on his back. Spin around your partner, switch directions, and feel for your balance points. The more balanced you can be, the more weight you can put on your opponent without falling off. This drill will also help you for times your opponent tries to buck you off or grabs a single leg for a takedown. If somehow your opponent can get ahold of one of your legs, it’s crucial to keep your weight pinning their shoulders down to the mat and sprawl your legs out. Working this spinning drill might not keep them from achieving a leg grip, but it will keep them from achieving the takedown they are working for.

One slight difference I enjoy with this back take involves the placement of your left leg if in the same scenario as the video. Instead of placing your knee just to the outside of your opponent’s knee, try pushing it into the gap between their arm and their knee. This will open them up from such a tight position into a more open one, allowing you to take their back easier.

In any Gi situation getting your grips is half the battle. In the top of turtle it is not different. Check out in the video how the instructor gets his first grip with his right hand. Reaching between his partner’s leg and arm he can get a good lapel grip. This grip allows him to both control his opponent from rolling forward, and pull him onto his side in order to take the back.

Where the instructor places his left hand onto the mat in front of his opponent, I have a slightly different technique for this back take. Try getting that hand inside next to your opponents neck, either achieving the common “seatbelt” position on the back, or getting another cross collar grip (like the instructor does after sinking the hooks in). This does two things for you: For one, it gives you even more control of your opponent; and for another, it gives you the option to apply a submission right there to keep your opponent guessing.

If you are having trouble staying balanced when attempting this back take, then posting your arm may be a better option. I enjoy getting the second grip though, because it seems much more powerful and controlling than just the one.

Keeping your opponent guessing is a key component to attacking the turtle position. If they know what you are attempting, they will be much more likely to defend or counter your movements. Now keeping them guessing doesn’t mean moving in a rapid fashion, but it does mean continuously moving if needed. Switching which side you are attacking from (their left or right) will keep them confused as to where to push or pull. Also, switching from a back take attempt to a submission attempt can open up your opponent. If you are only attempting to take their back, they can safely assume they should just defend the back take. But if you try to choke them, then go for a back take, then try to choke them again, your opponent will be guessing as to which to defend. Having to guess means they are much more likely to make a mistake, and leave one of the two options open.

Here are a few tips to improve this position as much as possible:

– Watch the grampy (or fat man) roll. Anytime you’re are committing your entire arm like your right arm in this back take, your opponent can hold that arm tightly and roll away from you, causing you to be swept to side control. So when you put that arm in there, be ready for them to roll. You can still use this to take their back, but you need to get to the other side of them (same side as your trapped arm) and get your leg underneath them. If you can get your leg underneath where they roll, they will consequently just roll into your back control. It is just a matter of timing and quickness to achieve this back take, so practice it with your training partners for optimal use.

– Hold tightly. If you get your required grips, and try to pull them backwards with just your arms, you aren’t going to budge them from such a powerful position as turtle. Instead of using your arms to pull, squeeze them tightly to your chest and use your legs and core to pull them over, your legs are much stronger and will aid you much more in moving them.

– Positional train! In the gym points aren’t something you worry about, so you might not have as many partners using the turtle position. In order to improve this position, take turns starting in the turtle position with a partner so you ensure you get to work on your back takes and defensive turtle techniques. Even going to the first dominant position or submission and restarting will force you to work your turtle that much more.

Work those back takes, and have fun choking your opponents after you get this move down!