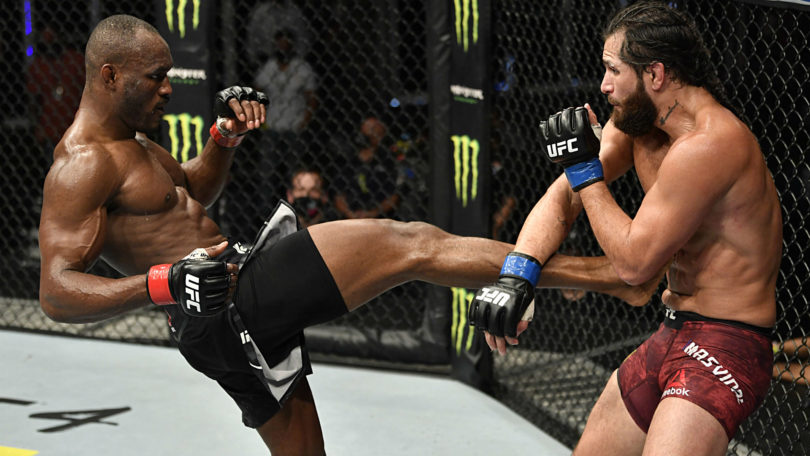 .July 11th saw the first serving of the four course Fight Island menu the UFC has been cooking up for us whilst the world was (and in some parts still is), in lockdown. There were lots of good things to speak about in this card, in and out of the octagon. But as is customary for any seasoned MMA fan, there was a healthy portion of controversy and absurdity to match.

Let us begin with the good. The setup at Yas Island looked second to none, throughout fight week all the fighters had glowing reviews of how they had been looked after and how streamlined everything was, this showed in the weigh-in results. All the main card fighters made weight (Paiva and Melo missed weight and forfeited 20 and 30% of their purses respectfully) and no further positive COVID-19 tests came to light.

This fight went about as well as we could have expected for Paige VanZant. The UFC are notorious for handing fighters with contractual disputes, that they no longer wish to do business with, terribly difficult matchups and that is what we saw here.

This fight was over before it really started; the pair met in the centre with a respectful touch of gloves, and from there Amanda Ribas got to work. An entree of leg kicks was exchanged, Ribas immediately entered the clinch, pushed Paige up against the cage and took her down with a head and arm throw. Landing in Kesa Gatame, Ribas worked to take Paige’s back, by baiting her own and finally established a tight armbar from the roll through.

Paige did her best to step over to relieve the pressure but was forced to tap. Amanda looks like a serious future contender; unfortunately for Paige, she now rides off into free agency with an uncertain future.

What a monumental fight this was. I may take some time and write an individual article about this match up. A master technician in Thug Rose Namajunas, and a tough, powerful juggernaut in Jessica Andrade. Both ladies facing adversity, momentum swinging like a pendulum, this fight was a classic.

The UFC adopted to use the larger cage for their excursion to Yas Island and this certainly favoured Rose. Andrade clearly learnt from the first fight and adopted a continuous and exaggerated side-to-side bob style of head movement, looking to lull Rose into committing to strikes and give her the ability to counter. However, Namajunas stamped her masterful dominance in the first two rounds landing a plethora of stinging jabs and thudding right hands, all setup from her ballet esc footwork.

To her credit, at the end of the second round Jessica made adjustments and began to work more aggressively into the pocket throwing heavy uppercuts and hooks, and managed to do some very good work in the last 15 seconds, bloodying the nose of Namajunas.

The tale of the fight was the superior straight striking and superior footwork of Namajunas. Jessica hits extremely hard, and her power hooks, her switching to the uppercuts, were great. Both women made a ton of adjustments from the first matchup but the better fighter on the night was Rose. She showed what you need to beat and manage a power striker, despite Andrade showing grit and determination to battle back in R3.

The tempo was building, and as Yan and Aldo walked out to their matchup, there was a real nervousness in the air and this fight lived up to all the hype. From the opening bell to when Leon Roberts stepped in to call this fight to a halt, both men put on an incredible performance.

Rounds 1-3 were tight, Aldo rolling back the years with his famous low kicks, forced Yan to change stances early and settle into Southpaw for the remainder of the fight in round one. Yan landing his famous right hand on multiple occasions, wobbling Aldo in the first and even coming close to a stoppage when reversing an Aldo takedown attempt landed a body shot from the top that had Aldo writhing in pain.

Aldo recovered and the war continued, both men doing their own great work in the next two rounds. We had everything, heavy hands landed to the body and head, head kicks, low kicks, spinning elbows, clinches, devastating knees, incredible output from both men. However, as the fourth rolled in Aldo began to visibly tire and Yan really upped the pace and the volume. A takedown late in the fourth sapped the last of the Aldo energy and Yan dropped Aldo hard in the first 20 seconds of the fifth.

The eventual ending was a difficult one to watch, after dropping Aldo and eventually forcing him to the turtle position, Yan unloaded around 3 minutes of largely unanswered ground and pound, referee Leon Roberts continually calling for Aldo to fight back and make him aware he still wanted to be in the fight. I think the stoppage that came in the end was too late, the canvas was a pool of Aldo’s blood, his hands by his ears was offering no intelligent defence and again we see Aldo go out on his shield.

After the controversy surrounding the first fight, Max Holloway looked to get revenge on what he felt was a fight he won. Strange as it was to see him in a regular fight kit and his quarantine haircut Alex might have been wearing a champions kit, but looked just as much the challenger as Max.

This fight was about as close as you can get, high level MMA at its finest. From the first bell of round one you saw the adjustments that Max had made from the first fight, a stance alteration, more aggressive, more pressure, less respect for the low kicks of Alexander. Max took the first two rounds that outside of the two respective knockdowns he served the champion, were awfully close rounds.

The third round is the most contentious in this fight. A razor close round that I scored for Max although both men landed with big shots of their own. Alexander engaging in the clinch, Max landing big knees whilst in there, and defending the takedown well.

Rounds 4-5 I think were easier to score in Volkanovski’s favour, albeit still seriously close rounds. He managed to score a couple of takedowns, and whilst Max showed how excellent he is at retrieving his hips and getting back to his feet, Volkanovski was able to land a few scoring shots whilst on the mat. Volkanovski I felt landed the more impactful shots, opening a cut on Max’s nose.

Round 5 I thought was still exceptionally close, but a round for Volkanovski. He mixed up the threat of strikes with his wrestling very well, landed good shots, and pushed Max into clinching situations, had a beautiful takedown with some control time and a small amount of ground and pound to boot. The challenger landed a lot of viscous knees, head and low kicks, coupled with his usual output of crisp boxing.

I include my scoring as the result went to Alexander Volkanovski. Even though I scored the fight the other way, I have no issue with a 4-1/3-2 Holloway card, or a 3-2 Volkanovski card. Sean Sheehan of Severe MMA who is excellent at implementing judging criteria tweeted the same.

We rolled into the Main Event. I went into some detail on the origins of this fight so I wont repeat myself here, but a heavy underdog in Jorge Masvidal entered the cage all smiles. The champion walked in like he had found Masvidal in his back garden, poetic.

The first 30 seconds of round one was frantic. Jorge throwing the absolute kitchen sink, and landing with a few taps and maybe the plug. Heavy low kicks from Masvidal were married to hooks, straights and uppercuts of all variants. Usman weathered the storm and catching a kick, put Masvidal on his back. Any space Jorge found he had palm strikes, back elbows and hammer fists for Kamaru. Usman was patient, bid his time until he was happy to disengage. The rest of the round was spent with Usman pressing Masvidal up against the cage. Both men went back to their corners panting.

The next 4 rounds shared quite a similar pattern, that is of excellent corner work from Trevor Wittman (whom Kamaru went to when he was scheduled to fight teammate Gilbert Burns). Masvidal on the breaks from the wrestling looking to land heavy, but Usman weathering and pressing Masvidal against the cage looking for takedowns. Masvidal defending them very well, and landing with knees whenever he got the chance. Usman landing short shots, and 100’s foot stamps looking to make Jorge bite on something.

In the end, the poetry that could have been for Gamebred was not too be. On short notice, he put in a great performance. Showing his incredible takedown defence, his crisp and powerful striking, his veteran knowledge, his heart and his ability to earn rest in the octagon where others cannot. Usman on the other hand, was as dominant as always, did exactly what was expected of him.