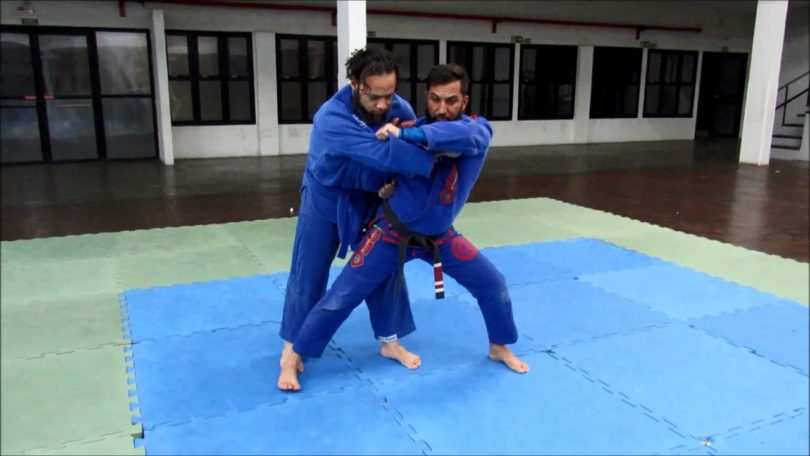 Tai-otoshi which roughly translates to body drop is one of the 40 original judo throws developed by Jigoro Kano.

Tai Otoshi is a basic Te Waza or hand technique that revolves around the use of both footwork and Tsurite or the lifting hand.

How Does it Work?

It is usually mistaken or combined with a standing Seo Nage, only the leg is extended to trip the uke or the opponent. To understand how Tai Otoshi works, it is important to pay close attention to the grips on the upper body. It usually starts with a grip on the same side collar while the other hand is holding the tricep of the opponent.

To set it up, the tori or the one who executes the technique will push forward to make the person base out on the other leg. Different players can also combine this move with other throws such as leg sweeps. Once the uke bases out with the other leg, the player lifts the uke’s collar and elbow in a circular motion as if the tori wants to bring the uke’s shoulder on the mat.

During this movement, the uke has already been off-balanced looking for his or her base on the leg where you directed the uke’s upper body. The tricky part is getting the opponent off-balanced enough to execute the move. In most occasions, the tori usually makes an extra step in between the opponent’s leg to get the hip closer as the tori turns his back to complete the throw.

The throw becomes successful when the tori extends the leg and trips the light leg of the opponent. This move is considered in judo as a Choshi-waza or a timing technique. It is usually a move seen among lighter competitors.

Tai Otoshi is quite tricky considering that it requires precision. You need to be precise when the leg becomes light. If not, it can even cause injuries to the tori.

Also, another common mistake is that the tori wasn’t able to go deep enough during his or her entry. The hips are not connected enough to nudge the opponent or the uke’s center of gravity. The toes on the extended fulcrum leg should also be pointing towards the support leg to avoid injury.

Any move without proper setup is useless. Hitting Tai Otoshi right from the get-go without any type of setup rarely happens. SinceTai Otoshi heavily depends on proper timing to be well-executed, it is important to come up with one to three throws prior to doing Tai Otoshi to increase its chances of success.

Tai Otoshi is usually combined with foot sweeps. The reason for this is to make the uke take a step back. Judokas with good Tai Otoshi usually doesn’t wait for the person to land his or her feet before executing the throw.

A good foot sweep that can be used prior to hitting Tai Otoshi is an Ouchi Gari. An Ouchi Gari is a throw that moves forward. Tai Otoshi is a good way to make the opponent post his or her foot. Apart from that, the step to the middle of the legs of the uke cuts the distance between the tori and the uke making it easier to execute the Tai Otoshi sequence.

Another good combo for Tai Otoshi is an Osoto Gari. Similar to an Ouchi Gari, Osoto Gari is a throw that involves the tori to move forward. Osoto Gari directly translated to English means a large outer reap. To execute the Osoto Gari, you can perform off balance the upper body by turning the opponent like a wheel. You then perform a cross step to reap the opponent’s leg. However, it’s a common counter for the uke to step back and hide the leg from being reaped.

This scenario leaves a window of opportunity for the tori to perform a smooth Tai Otoshi against the Uke. However, this time around, the tori will have to wheel the upper body again before connecting the tori’s hip against the uke’s hip and finishing the Tai Otoshi.

There is always a likelihood of injury when performing Tai Otoshi. If done with poor timing or if done against an opponent that is too heavy, there is a chance that this move can injure a tori. Leg blocking across the knee can spell disaster for the tori especially if the entry isn’t done well. This can result on a sprain or a tear that would require surgery.

By blocking the knee, the uke can easily land on your knee making twisting it which could potentially injure the surrounding structures most likely the MCL.

What can be done to minimize the possibility of injuries?

It is important for anyone executing any throw to always exercise caution whether it is during uchikomi or randori.

Aside from the throws, you need to make sure that you understand your body’s mechanics to be able to minimize the risks of injuries. Know your joints range of motion to know up to how much you can twist. You can also perform leg strengthening exercises that can help lessen the chances of injuries. However, nothing beats good mechanics when it comes to doing Tai Otoshi.

Judo Olympian and BJJ black belt Travis Stevens has a number of tips when it comes to executing Tai Otoshi. First, it starts with the grip. He used an alternate setup for doing Tai Otoshi. Instead of using two grips, he only uses one to make it easier to bail in case the move has been countered. However, the other hand tends to chop to create the same if not a better off-balancing effect on the uke.

And more importantly, the angle of the tori’s knee should be at a greater angle of flexion. It means that it lessens the chances of being torqued that it can injure your MCL and other surrounding structures. He also performs a well-executed kuzushi to decrease the chances of an injury. Kuzushi is an important part of removing the base of your opponent on both feet.