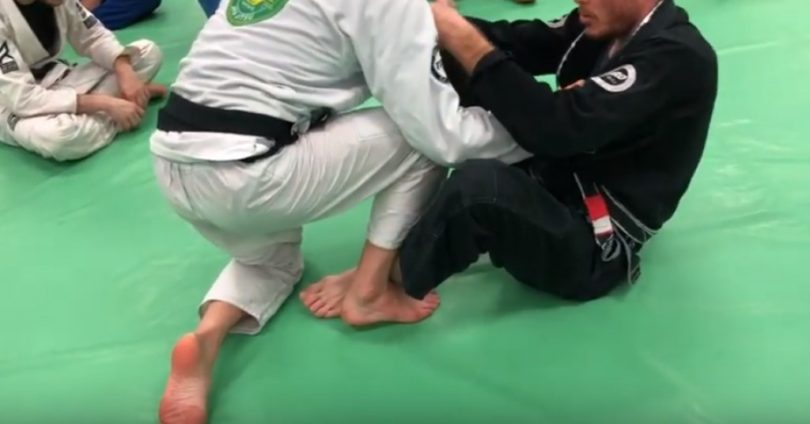 Shin to shin guard is often used together with sit-up guard or a means to transition towards a single leg x position. This type of guard is a good way to get rid of your opponent’s base forcing him or her to balance on the other leg or even concede the sweep.

But aside from the sit up guard series, shin on shin guard can also be used when playing collar sleeve or a spider guard.

To prevent the leg from stepping back, it is crucial that you place your foot by the hip instead of going by the knee. Now, this wedge created by the sit up guard will give you enough time to scoot your hips right on the outside of the foot. You want your butt to be sitting right beside the pinky toe. This will make it easier to get your shin on shin guard as you scoot out and get closer to your opponent. And also, let’s not forget the outside arm that should be hugging by the leg. The arm hugging by the leg can be grabbing by your lapel, your opponent’s lapel, belt, or any sleeve.

This is the starting position where you can transition towards different guards or even attempt for a sweep or decide to go for a takedown.

From here, if you want to go for a takedown, you will simply have to off-balance the opponent by switching the sit up leg that is stepping by the hip to hit the back of the knee using your instep. At the same time, your shin will elevate your opponent’s shin making it easier for you to stand as your opponent’s weight is shifted towards the other leg.

If your opponent goes back and you weren’t able to stand for the takedown, you can always switch towards a single leg x. Open his hip before the opponent gets his or her base and you will be able to finish a sweep. If you opt to play a leg lock game, you can even opt to not stand and collect your two points. Instead, what you can do is to find the foot and engage with a foot lock.

From the Koala Guard

The difference between a koala guard and a sit-up guard is you don’t have the foot as a wedge on your opponent’s hip. You usually get to Koala guard when you start to play guard without any grips and your opponent decides to step forward.

In this situation, you don’t want to be in front of your opponent especially when you don’t have the shin on shin. If you hug right in front of the knee, you are going to be defending a knee cut pass. It is of utmost importance to sit beside your opponent’s pinky toe.

And if you are on the side, it is also easier to sneak your shin on shin. But just like your sit up guard, your arm should be hugging the leg (thus the koala guard name).

To get a sweep, it is ideal for the non-hugging arm to grab by the inside part of the pant right by the knee on the free leg. Next, turn to your shoulder and flick using the shin on shin. From the side, collapse the knee if the opponent kneels and stand up to get the two points.

However, if the leg stood up to regain his or her balance, you want to transition towards a single leg x. Since you have control of the pant, it becomes easier to knock the opponent on his or her back. From here, you can get the two points or even switch towards a foot lock if you need to finish a submission.

Spider Guard and Shin on Shin

One of the things that you can do from spider guard is to work with your shin on shin guard to finish a sweep. This move works when the opponent is in a combat base with one knee up and one knee down. You want to go for a shin on shin opposite the extended spider leg. Now, once you have established shin on shin, you want to make the opponent’s knee hit the mat while the knee is manipulated and internally rotated by the shin on shin. With your sleeve grip on the retracted spider leg’s side, switch towards the edge of the pant (the leg that is internally rotated). From here, lift up and stand up to finish the sweep.

If you are conservative with your effort, you can also use the shin on shin to get the opponent’s knee down and close your guard.

Worm Guard and shin on shin

A lot of people rest in combat base once they are in a worm guard. This is a common scenario that happens especially if you are dealing with a heavy passer. What you can do is to hit the shin on shin and throw your shin similar to a scissor sweep motion once you have both knees on the mat. Since the knees are on the mat, it is easier to finish the basic worm guard sweep from here.