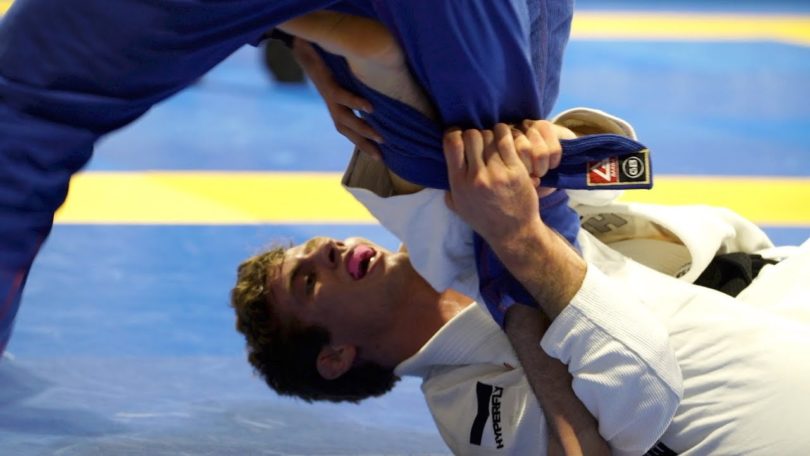 The worm guard was developed in 2014 and was first used in competition by Keenan Cornelius. Though there are mixed reports on who developed the Worm Guard whether it’s Keenan Cornelius or Andris Brunovskis, it’s clear that it has revolutionized guard play in the last years.

Origins of the Worm Guard

Though lapel guards were used by some players in the past including Quexinho and Cobrinha, Keenan Cornelius was able to create an entire system based on the worm guard. It was used against Murilo Santana during the 2014 Pan American Championship during the quarter-finals match. According to Keenan Cornelius, he initially didn’t have any plans of using the worm guard during that time since it was still being developed. However, with Murilo Santana’s top pressure almost passing Keenan Cornelius at one point, he was forced to use the Worm Guard to go for a sweep.

How to do the worm guard

There are three common setups that we will discuss. It allows the lapel to be used in different stages of your guard.

The first option is coming from a lapel lasso. What’s a lapel lasso? Instead of grabbing the sleeves to have a lasso, you use the lapel and tie it on one thigh. Also, the usual entry for the lapel lasso is when you have a grip on your opponent’s lapel. From here, you can either circle your leg inside and scoot the with your hip to make your hip active. Or you can simply weave the lapel and pass it underneath your leg.

This entry could also be coming from a galaxy guard. It makes it easier to release your step on the lapel and start wrapping your leg with it.

Next, it is important to hold the opposite leg. A lot of worm guard players will play a Dela Riva guard on the other leg to keep it checked. Now, you want the wrapped leg’s shin to be in contact with your opponent’s hip. The lapel will be going underneath the opponent while it is still wrapped on your own leg. The end of the lapel will then be passed to the other. And to ensure that the position is tight, it is going to be passed again to make sure that the knee is internally rotated preventing an easy passing progression.

Another good option and usually a shortcut to setting up the worm guard is when you hit the sit up guard. It means that you are going to kick by the hip and not by the side of the knee. This makes it harder for the top guy to step back and counter your sit up guard and your worm guard setup.

Once you are in a sit up guard position, take out the lapel and wrap it over your leg. The outside arm is then hugging the leg and waiting for the end of the lapel. Just like the first set up, the grip on the lapel will be switched and given to the inside arm again to make the worm guard tighter.

Sit up Setup with the Belt

Wrapping the leg is of great importance when it comes to setting up the worm guard. However, a lot of good passers will make it hard for you to get their lapel. A good option when you are playing a sit up guard and looking for a worm guard is to use the belt as an alternative to the lapel. This is a practical option when you also can’t get the lapel immediately. You can then fight for the lapel as the opponent gets busy with your leg and eventually wrap it around your leg and underneath your opponent. But if you can’t get the lapel still, the belt can work to some extent when doing work guard.

The basic worm guard sweep happens when your opponent is on a combat base. The leg that is up is usually the side where he has his own lapel underneath. A basic way to execute this sweep is to post using your free hand with your elbow. Next, you want your wrapped leg to be facing the opponent and do the same motion as doing a hip bump sweep. You also don’t want to let go of the lapel. This is a fairly safe sweep. With the lapel intact, you can still get back to playing guard if you can’t complete the sweep.

So what if the opponent stands up and you have the worm guard? Here, it becomes easier to come up with different attacks. One possible attack is to go for a deep Dela Riva guard and fight for the opponent’s back. In some instances, it can even be used to hit a balloon sweep.

The worm guard is still continuously evolving. Since the regular worm guard sweep still has your own leg tied up that makes it easier for the person on top to fight the sweep, worm wrestling was invented. It involves loosening up the worm guard just enough to get the leg out and stand on two legs while still having the lapel underneath the opponent.

Armbar from the worm guard

The worm guard is also a good guard to set up your attacks. For instance, a lot of guys on top would control the non-wrapped leg to prevent the sweep. If you break it and control the arm, it is possible to finish an opponent with an armbar or even switch to an omoplata attack.

Why Use the Worm Guard?