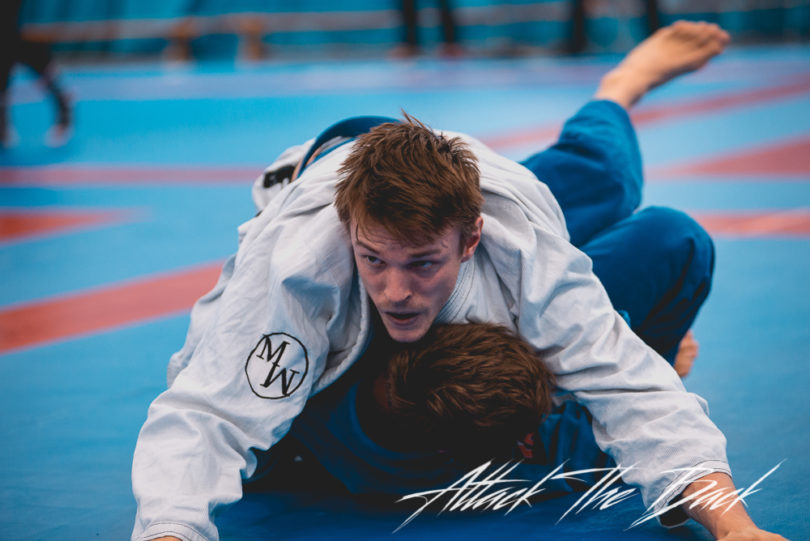 Achieving the mount position is sometime a huge accomplishment while rolling.  It is one of the most dominant positions in Jiu Jitsu and has scores of submissions for you to choose from. Being able to maintain such a great position is a huge advantage and will make your submission setups much more effective.

The chances of submitting your opponent can be limitless if you can maintain mount, and the chances of them beating you are slim to none if you mount them for the entire match or roll. Drilling the techniques to keep your opponent mounted and unable to escape is just as important as drilling the submissions to finish the fight.

So here are some technical tips to stay cemented in the mount position when your opponent tries to escape.

Using leverage is key in all of Jiu Jitsu, so don’t forget to use it in positions of dominance as well as your sweeps. When your opponent gets to 3 quarter mount by slightly replacing, you can use your arm to hook their head on the side they are turning to. By turning their head the other direction you can halt their progress from replacing. The idea of misaligning your opponent’s posture is evident in many positions, mount is definitely one of them.

Don’t solely focus on this technique though, if you are too rough with it you can injure your partner’s neck.  It can also be defended by getting their head turned, and if they are used to the pressure they can still replace with you focusing on the hook.

When your opponent tries to roll you over with a trapped arm, a great counter is to hook under their knee with your leg. You will be hooking the leg on the side you are rolling away from, and dropping your hip into theirs so you can keep them flattened out. Getting this leg hook is a great way to shut down the arm trap escape (or buck and roll). It is very effective if you are committing an arm to a collar for a choke, or hooking under your opponents head for a choke.

The elbow escape is one of, if not the most effective mount escape. It involves making a frame on your opponents hip and getting your elbow to the mat so you can hip out from underneath them and into half guard. So how do you counter something that is such an effective escape tool? The key is in the angles at which you let your opponent push. If you let your opponent get a good frame on your hip and push straight into your base then it’s just a matter of time before they escape. Instead of letting your opponent push into your base, turn perpendicular to them so they can’t push straight into you. To sum up the basic idea of turning, here is a video of Damien Maia explaining the counter:

Notice that he isn’t fighting to keep his hips in the exact same position.  Instead of using force against force, he moves around the force and repositions himself into a dominant position. An aspect to keep in mind for this is how he uses his heel as a squeezing point where his hip was before. Completely ignoring that point of pressure will allow you opponent to escape through a wide open doorway. So when you move your hip away from theirs, make sure to bring your heel to replace it. Also, watch how he brings his knee back to the full mount position and brings it high under his opponent’s elbow. Keeping a high mount like this opens up your submissions, and makes it much more difficult to replace guard or escape mount for your opponent.

Another option when countering the elbow escape like Maia shows is to stay in the sideways position. This position (technical mount) is a very dominant place to find yourself, and will still give you points for mount in a competition. When you are in the technical mount, armbars and chokes are very accessible; it is also difficult to escape the technical mount.

To fully obtain technical mount when you turn perpendicular to your opponent, bring the knee that is behind them up next to their head. My professor likes to say “it’s like making a little pillow for them.” The hilarious thing is that it IS like a making a pillow for them, because they’re almost to nap time.

You can keep your opponent from turning back flat on their back most of the time from this position, but if they do start to flatten out you can always return to the full mount to continue your business there.

A good way to practice taking technical mount is by having your partner turn onto their side without attempting the escape. This will help you feel the twist in your hips that is necessary to obtain technical mount. Start off using both hands to help pull you into position. Once you have improved with it, you can start using one hand or no hands at all.

Keeping mount is problematic to your opponent and it will most definitely cause a reaction, or frustrate them into giving you an opening to end the fight. If you can dominate the position enough to stick on mount for several minutes, they will eventually break and give up on escaping. Breaking your opponent’s will to fight is a nasty way to submit them, and it is oh so effective.  Practice your mount maintenance today and reap the rewards of domination tomorrow.