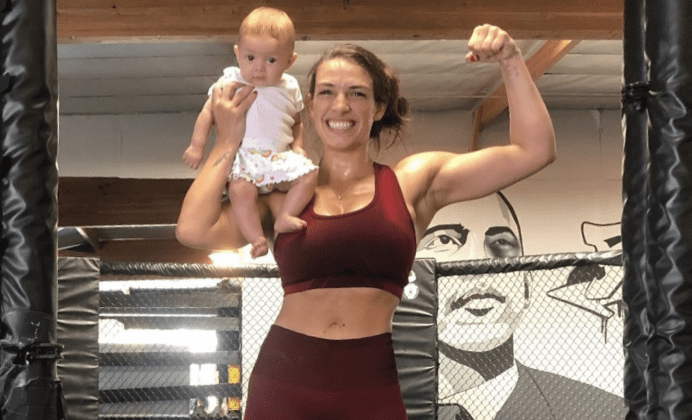 Even though the title of Mom Champ goes to Michelle Waterson, it’s hard to overlook the quick recovery Mackenzie Dern has had.

It normally takes around twelve months for a body to fully recover from childbirth, but that’s too long for Dern, who is making a return to the octagon just four months after giving birth to her daughter Moa Dern Santos.

In an interview on Ariel Helwani’s MMA Show Dern said “6 Weeks after [giving birth] I was doing Jiu-Jitsu, 4 weeks I was back to doing Muay Thai”

She revealed that it was the UFC who was reluctant to have her back so quickly, saying they were worried about her getting injured or her having to cut weight for the fight.

Mackenzie said that in order for her to get a fight booked she had to go to UFC’s performance institute to do a number of tests, including discussing with her how dieting and a weight cut would affect her weight cut, however, her doctors said that she was fit to fight so quickly.

Dern also talked about how she lost out on a huge fan base after announcing that her and her husband, professional surfer Wesley Santos were expecting a child “I lost around twenty thousand fans after I announced my marriage to my husband.” However, she then talked about how she gained a whole new fanbase after the birth of Moa “I gained a lot more after the birth of Moa, showing that I’m building new types of fans.”

“I think it’s a new and different type of public. Maybe I have more mums following me now. Maybe they’re inspired by the story.”

Check out the whole interview below