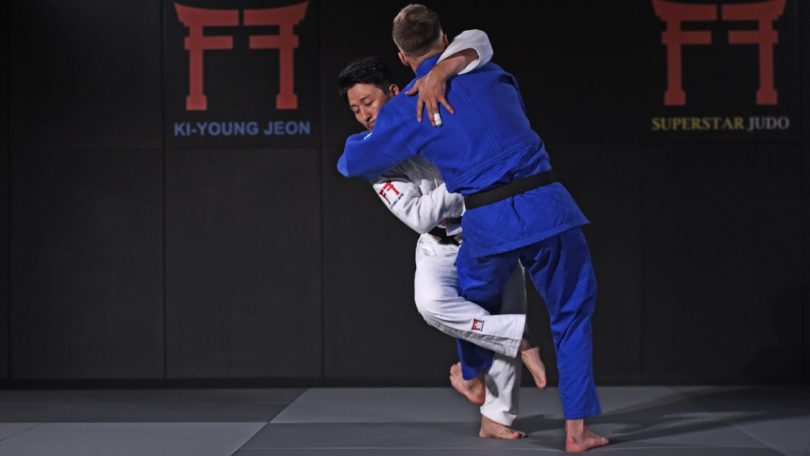 The slightest movement can give the biggest impact. That’s what judo is all about. Dubbed as the gentle art, it is all about efficiency especially once you have developed the proper timing and execution of your throws. And this is what Kosoto Gari is all about.

Classified as an Ashi Waza or foot technique, it involves taking advantage of your opponent’s attempt to attack or back away from your own attacks. It is heavily reliant on foot movement and timing.

How to Perform Kosoto Gari

Performing the Kosoto Gari starts with regular grips. The tori starts with a collar and tricep grip. The Tori will then move the Uke in different directions. One common mistake is that the Tori simply controls the posture of the Uke. The goal is to make the Uke step on either the left or right foot. Before the Uke even completes the step, the Tori will reap the uke’s heel removing the foot needed to regain his or her base.

Do you need to always have complete grips on both collar and sleeve whenever you are attempting a Kosoto Gari? This shouldn’t always be the case. You can also try variations such as simply holding the opponent’s tricep to set up your attack.

Low Percentage Move and How to Fix it

One of the reasons why you don’t get to see this as a judoka’s go-to throw is the fact that opponents also have a good base. They’ve developed a good sense of balance through years of training. And this is why you will need good timing and finer details if you wish to use this technique against judo black belts.

There are a few tricks that you can also incorporate to increase the success rate of your Kosoto Gari. For instance, whenever you are going to perform the reap, you might want to also turn the opponent’s body. Off-balancing is an important part of any throw.

Next, it shouldn’t always have to be forward and backward. You can also mix things up. You can bring your opponent stepping sideways before hitting the Kosoto Gari. By mixing multi-dimensions in setting your attacks, it confuses the opponent making him guess where to bring his balance back.

In addition to this, you also don’t want to let go of your upper body grips in case you have your opponent on the mat. There is a chance that they can still recover and you have to put your weight to control his hips and prevent the Uke from getting up from your throw.

A common mistake, whenever someone is gripping the opponent’s collar, is to not have a high grip. Grabbing somewhere around below the clavicle won’t give you the leverage that you need. If you have a low collar grip, the tori will have to use his or her muscle more than timing to off-balance the uke. A high grip makes it easier to off-balance an opponent. Tall judokas can also make use of a horse grip on the top collar to add a push to their off-balancing.

It is also equally important to set the traps whenever you are going to initiate a Kosoto Gari against your opponent. A good way to do it is by having other throws that are considered Ashi Waza. A good mix of these foot techniques can increase the chances of completing the Kosoto Gari.

What are Moves that can be Incorporated with the Kosoto Gari?

There are a number of good throws that can be used along with Kosoto Gari. As mentioned, Ashi Waza techniques can be combined to increase the chances of removing the opponent’s balance. An Ouchi Gari is a great way not only to get the opponent to step back but can also be used as a combination with the Kosoto Gari.

However, you also need to understand the chances of getting countered are quite high. When taking your foot out to reap the uke’s ankle, it is possible that he or she can remove the stepping foot and set his or her own attack. Tsubame Gaeshi is a perfect example of this. To minimize the chances of getting countered, it is important to develop good timing in your techniques. You also want to not telegraph your throws.

Tsubame Gaeshi requires small movements which is why it is also a good way to counter the Kosoto Gari. This counter simply requires removing the leg that is about to get reaped at the very last minute before timing your own ashi waza.

The ability to teach Ashi Waza is of great importance especially during the foundation years of a judoka. For a white belt, it is important to not only teach the move. For a white belt judoka to learn how to perform the Kosoto Gari, it is crucial to know the basic foot movements and have a sense of timing when the Uke’s other leg is still in the air and to have the chance to execute the throw.

The instructor should teach their students how to move their uke. Moving the Uke forward and backward is a good start. It can be used as a way to recognize the gait pattern and therefore having a better chance of finishing a Kosoto Gari.

Just like any foot attack, it shouldn’t be taught separately. Instead, it should be taught as part of a combo. You can combine two to three Ashi Waza to increase the chances of getting your opponent’s back on the mats.

Who Should be Using the Kosoto Gari?

The right tool for the job is always a good concept to use whenever thinking of using foot techniques in judo. If you have an opponent who tends to bull rush forward, these are subtle moves that can make a huge difference. However, if you are a bit short, finding the right timing against a tall opponent might be a bit difficult. And this applies whenever you are doing a Kosoto Gari on a live opponent.