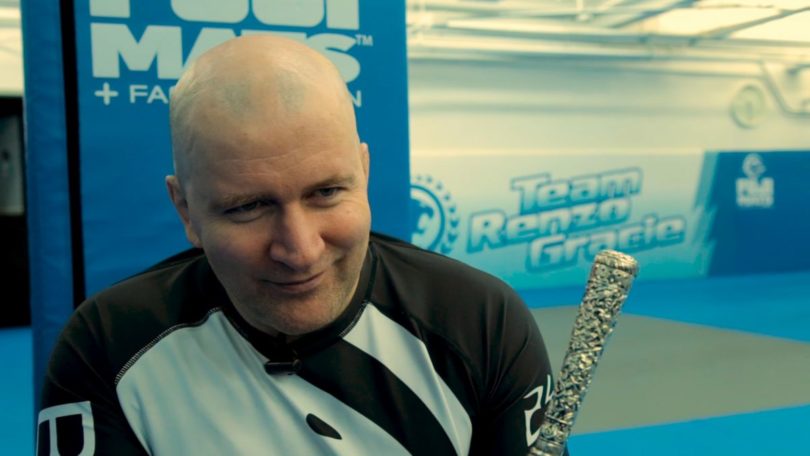 Known as the founder of the DDS (Danaher Death Squad), John Danaher is a Brazilian Jiu-Jitsu Black belt under the legendary Renzo Gracie. He is a featured instructor at Renzo’s Brazilian Jiu-Jitsu academy in New York and is widely regarded as one of the best coaches of this generation of Jiu-Jitsu. He is so influential that he changed the modern jiu-jitsu game overnight. Danaher has received appraisal from some of the most influential people in Mixed Martial Arts history, including MMA coach Greg Jackson, BJJ legend Vinicius Draculino and MMA commentator, comedian and podcaster Joe Rogan. All of them have praised John for his technical and detailed teaching style and knowledge of the sport.

However before his illustrious Jiu-Jitsu career, John Danaher was more widely known for being Georges St-Pierre’s MMA coach along with Greg Jackson & Firas Zahabi. However, these days he can be found at Renzo Gracy Academy, New York training the next generation of killers. A number of fighters have had huge success under Danaher, many of them have won huge invitational tournaments, including the Eddie Bravo Invitational & Polaris. These people have been dubbed as the Danaher Death Squad. This mix of BJJ Black Belts, Brown Belts and Purple Belts are some of the world’s greatest submission grapplers and currently includes:

Originally Born in Washington D.C, John Danaher moved to New Zealand as a younger boy as his Father was a pilot in the New Zealand air force and was part of the U.S. military during the Vietnam War.

Danaher was raised in Whangaparaoa, just outside of Auckland and began his martial arts career at an early age, when he started to learn kickboxing. in 1991 John moved back to the USA in his mid-twenties to do a Masters in Philosophy and a Ph.D. in epistemology at the University of Columbia. At the time, weight lifting was John’s passion and as a result, weighed around 235lbs, he even had long hair!

In between writing his dissertation and teaching, John Danaher would also be moonlighting as a bouncer. One night John overheard a conversation about a scrawny Brazilian guy, who had dominated much bigger men in a no-holds-barred fighting competition. Danaher eventually got his hands of a VHS tape of UFC and watched Royce Gracie, Helio Gracie‘s son, dominate men twice his size, in less than 10 minutes.

Later on John Danaher would be challenged by a Columbia classmate, half his size, to a bout of grappling. This person has claimed to be training Brazilian Jiu-Jitsu for less than two weeks and had decided to test out his skills on the much larger John Danaher. He locked the door and put him in a headlock, a tactic that had worked numerous times as a bounder. But the student started to wrap his legs around him and rotated towards his back for a choke. Eventually, John’s arms burned out and the two separated in a scramble. In an interview with the New Yorker he said, “I was absolutely stunned that, despite a considerable size difference, i could do nothing to him on the floor.”

Soon after, John Danaher found Renzo Gracie, Royce’s cousin, and started training under him. In the 90s, Jiu-Jitsu was a different kind of beast touch guys and traditional martial artists from the street would show up to the gym, all looking to prove they had what it took to beat, this new martial art Brazilian Jiu-Jitsu. Many would use tactics such as biting, eye-gouging and pressure point pokes, but all were taken down, and subdued by slaps, instead of punches. But the gym was not just a space for brawling, it was also a laboratory, Jiu-Jitsu was coming from Brazil, through to California before making it’s way New York and students were already trying to devise new grappling opportunities.

Knowing he was never going to be a professional fighter, due to starting too late in life and a debilitating knee injury, which occurred in the 80s during a game of rugby, Danaher was given the opportunity by Renzo Gracie, as a purple belt, to become a coach in the school after their previous coaches Ricardo Almeida and Matt Serra decided to pursue other careers.

It wasn’t until around 2000 he would start to look at leg locks when, as a brown belt, he had a run in with Dean Lister, who, at the time, was at Renzo Gracie academy training for an upcoming fight. At the time leg locks were looked down on in BJJ as a hail-mary tactic to win in the final moments of a fight. However, when he question Dean Lister about his use of leg locks, Lister, who was using Achilles locks to win numerous fighters, said to him, “Why would you ignore fifty percent of the human body?” This inspired Danaher to look further into the concepts of the leg lock game to break it down into gradually interlocking positions and attacks that would overwhelm opponents from any position.

Danaher’s obsession with Jiu-Jitsu had him on the mats, nearly 14 hours a day, in an interview with Renzo about Danaher, he said “he [Danaher] does jiu-jitsu every day; we can’t get him out of here. I think he would come in on Christmas if we would let him.” However, his hard work finally paid off when he was awarded his black belt in 2002 from Renzo, alongside his good friend and training partner Shawn Williams.

John Danaher’s first stand out student was a young Canadian from Montreal named Georges St-Pierre. GSP would regularly take a train down from Montreal to New York to train and Danaher, along with the help of Greg Jackson and Firas Zahabi would become a multiple-time UFC champion. One of the crowning moments of Georges’ career was in 2009 in a rematch against BJ Penn. After winning their first encounter by split decision, this time GSP wants to make sure this was a defining victory. He enlisted the help of Danaher, who taught GSP how to pass BJ’s guard and control him. GSP went on to beat BJ Penn so badly that he didn’t return for round 5.

When Georges took a hiatus from the UFC in 2013, Danaher decided to set his sights on his up and coming students, Garry Tonon, Gordon Ryan and Eddie Cummings. After teaching his standout students his leglock system, he then sent them out into the world. A world where the submission-only format was beginning to flourish. Here they beat legends and esteemed grapplers such as Masakazu Imanari, Marcin Held and Reily Bodycomb.

From the early 90s when he discovered Jiu-Jitsu and started training at Renzo Gracie Academy when he moved to New York Danaher would become obsessed with Jiu Jitsu. According to his close friend and training partner Shawn Williams “he does Jiu-Jitsu every day, we actually couldn’t get him out of here. I think he would come in on Christmas if we let him:”.

On April 2nd 2002 both Shawn Williams and John Danaher would receive their Brazilian Jiu Jitsu Black Belt from Renzo Gracie.

Why does John Danaher Wear a Rashguard?

John Danaher is a relatively private man and lets his-long winded Instagram posts (that he writes on his morning subway trips) do the talking. One of the questions most-often-asked to John is why does he wear a rash guard? Again in a long-wined Instagram post, he decided to answer,

Arguably the question i am asked more than any other has nothing to do with jiu jitsu. “Why do you always wear a rashguard?” First let me dispel a commonly voiced, but incorrect theory. It has nothing to do with fighting or being ready for fights. In my current physical state, an aggressive five year old could easily defeat me with a simple kick to the knee or hip or even a simple push – a rash guard isn’t going to save me! My reasons are purely practical. First, they are very comfortable, Second, they are easily washed and dried. Third, they are extremely low maintenance/wrinkle free/easily packed for travel etc. Fourth, being a low friction material, they are well adapted for wear under a jacket. Fifth, They enable me to comfortably demonstrate a technique in impromptu social situations to students. Sixth, they are warm in cold weather, yet cooling in hot summers due to wicking effects, and; if caught in rainstorm, they will dry in minutes even while being worn. Seventh, some clothing companies sponsor and support my athletes. I am proud to represent any company that supports my people. Eight, they are free as clothing companies are happy to see me wear their products. Nine, there is considerable variation in rashguard design that can vary from informal daily wear to more formal wear for dates/occasions. When it comes to comfort and utility and low maintenance, I have never seen an attire that can beat track pants, sneakers, rash guard and fanny pack.”

From starting with his training back in the 90s back with Royce Gracie to moving to New York to train with his Cousin Renzo Gracie, Danaher’s obsession with Jiu-Jitsu was clear to his close training partner Shawn Williams. “He would be in the gym from 12-14 hours a day. He would even be there at Christmas if we let him.”

Danaher currently has one instructional out named Leg Locks – Enter The System, which is available through BJJ Fanatic’s website. After saying he wouldn’t release an instructional DVD through fear that his students would not benefit, he now believes that they are now self-sustaining enough to release his system to the world. These systems are key to the Danaher Death Squad’s continued success.

This is an extremely detailed instructional and it’s  9 hours long and consists of 8 chapters. These include:

If you’re used to normal technique instructionals, get ready because Danaher himself said this is no ordinary DVD. The first DVD itself features no instructional teaching whatsoever but goes into the philosophies behind his teachings and his systems. He goes through the system in his trademark methodical, calm and detailed approach. This is probably one of the most detail orientated instructionals, so get ready with your notepad and pen. As shown earlier, each chapter features different parts of the system and each section is taught as part of John’s famous hierarchy, culminating in high-control high-percentage scenarios.

Featured with the DVD is a graphic chart, which outlines the system in it’s entirety. Here it methodically goes through the Essential Skills, the 3 Sub Systems and 10 Core Principles of the leg lock system.

If you’re interested in upping your leg lock game to a higher plane, I would highly recommend purchasing Enter The System from BJJ Fanatics.