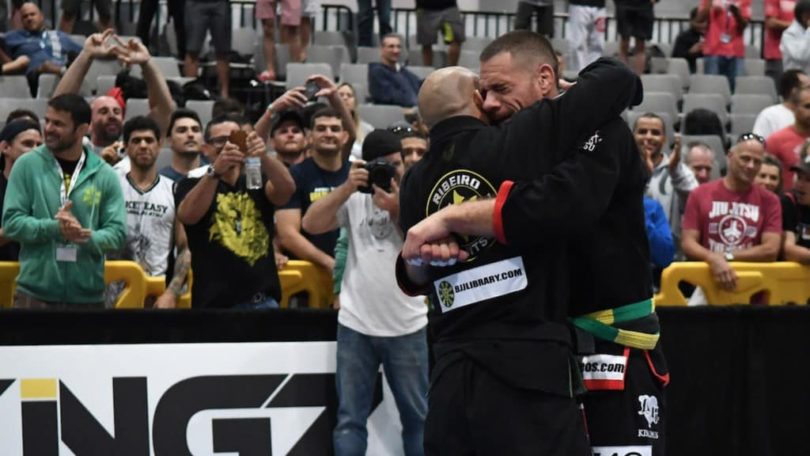 Over the last few years there has been a saddening trend hitting the high-level IBJJF competitions, the close out.

If you’re un familiar with close outs, basically what happens is two team mates will meet in the final and one with bow out, awarding their friend, training partner or instructor the win. All the top teams are notorious for it, especially Gracie Barra, Checkmat and Atos.

It happened in the 2016 world master championships with Rafael Lovatto Jr and Xande Ribierio, the 2015 Europeans and in the 2014 Pan American Championships five out of the nine finals closed out, which caused a bit of an outcry within the community, with a lot of people asking for changes within the rule system to stop this from happening. A lot of people pay for streams and when they get to see two of their favourite fighters go head to head, and then have them close out is pretty disappointing.

Thankfully, there are a few good fighters in the mix willing to fight to the death for the gold, even if it means going through their best friend to do it. One of those fighters is Rafael Mendes.

”Bruno’s one of my best friends and always added a lot in my training and learning. He is a brother to me, but we met in finals together, and we ended up not fighting. We reflected on this and realised that we were devaluing the championship and hard work in training. The fact that there was no final in category devalued our achievement. Since then, we decided that we would fight, because only one is recognised as the champion, and that is the purpose of training. The fact that people say they will fight changes nothing. Nothing will interfere with our friendship, we just want to be as professional as possible so that our results are always recognised, and not devalued.”

“The fact that there was no final in category devalued our achievement.” This is why close outs should be banned in all major competitions, it doesn’t just devalue the fighter’s hard work and training, it devalues the sport. If the community, fighters and organisations want to see BJJ grow then close outs need to be stamped out, either through disqualification or harsher means.

There are two sides to every story and medal hoarder Rodolfo Vieria gives his reason to why close outs are a must in BJJ.

“To say that a person will fight with a friend, then he is not a friend. Brother fighting brother is normal in judo, but in Jiu-Jitsu, is an entirely different thing, it’s another philosophy. We’re not used to, it never was like that. I see no problem in ‘closing’, and could not fight my friends from workout, ever. If we come to a final of a major championship, or I would give the title, or we would come to an agreement. I think friendship is much further ahead than that. I am not in favour. Each has his thoughts, and mine is this one.”

For Spectators a close out is a big disappointment, however in IBJJF competitions, where fighters have paid to compete and will financially get nothing out of it then a close out is the easiest option, neither fighters risks injury and they both get to stand on the podium. “Of course black belts have to fight. I really don’t like that closing category business, this makes the event miss the brightness. MMA is different as it has punches in the face, but in Jiu-Jitsu, there’s no reason not to fight. If two athletes from the same academy reached the final, two deserve to fight for the chance to be champion. Without making the final, the athlete does not have the same taste champion, and everyone knows it – There is no top two”

However, he has regularly closed with with Braulio Estima and also closed out in the 2016 World Masters Championships again with Roberto Tussa.

Close outs are part of the tradition of the sport, however, it might be time for the IBJJF to take steps to eliminate them. Gentleman’s agreements cheapen the competition and lead to anti-climatic finishes to competitions. No other high level combat sport suffers such a practice, why should jiu jitsu? Athletes are able to face teammates, it happens in wrestling tournaments and if people want to see BJJ in the olympics then there’s no way the IOC will allow close outs. The Miyao brother’s gym is famous for its hard rolling and the brothers have gone on record how they go 100% against each other in the gym, but they cannot face each other in the finals? For an art that preaches getting rid of one’s ego, this practice seems to have no other purpose than to protect one’s ego from having to suffer a loss to someone you train with and see every day.

The ADCC Submission Wrestling Championships successfully eliminated them with a simple threat of a double disqualification for closing out brackets or throwing matches. There is no reason the IBJJF cannot implement the same practice.

What do you think about close outs in major tournaments? Voice your opinion below.