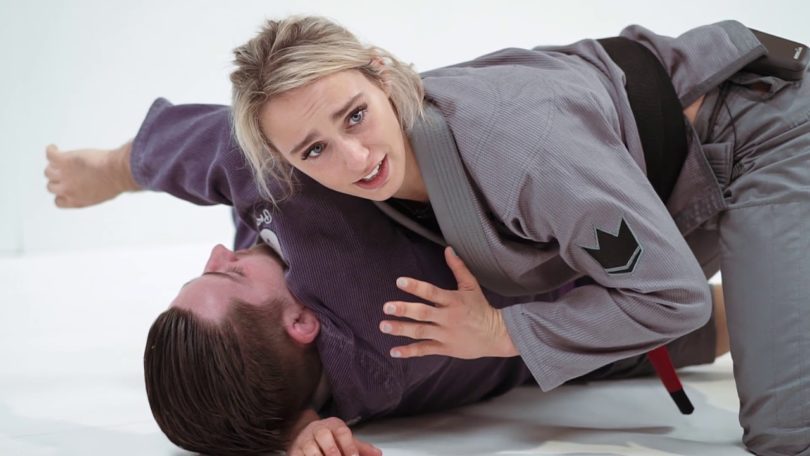 Arm triangle, also known as the head and arm choke, is a submission that is simple yet effective. Though it looks like a choke reliant on arm strength, this isn’t the case. There are a lot of intricacies that can make the choke effective even if it was being done by a smaller practitioner against a bigger opponent.

The arm triangle is a great submission that comes from different positions. On top of that, different chokes such as the Anaconda choke and the Brabo choke are variations of the arm-triangle choke.

A lot of white belts learn arm-triangle chokes early. The reason for this is that it is an easy move to execute. It is similar to your rear-naked choke, something that has gained mainstream popularity thanks to the reach of the UFC.

What makes it a good choke even for self-defence situations is the fact that it is a blood choke. It means that with the right placement of the arms, it is possible to constrict the opponent’s blood supply and get him or her to sleep.

There are different setups to the arm-triangle choke. It can be used from side control, closed guard, or even when you are in the middle of a scramble.

But regardless of the position you are setting the arm triangle from, this move requires to trap one arm of your opponent. You will then have to clasp your hands to get the opponent’s neck to be in contact with his shoulder. A traditional way to hit the arm triangle is by holding your bicep and squeezing the opponent inside your arm.

One of the most common counters to the arm triangle is to “answer the phone”. Though there are different ways to nullify this counter, getting the hand by the ear can create space between the shoulder and the neck buying the opponent time whenever he or she is in the arm triangle.

Arm Triangle from Side Mount

There are different setups to the arm triangle. However, the majority of arm triangles usually happen from a dominant position such as side control. Whenever you are performing an arm triangle from a dominant position, it is important to get the opponent’s arm to extend to be able to shove it across. From the side mount, it is possible to get this scenario by attacking the far side arm. With a tight cross face, you can get your head by your opponent’s opposite side armpit. With the help of your free hand (the one near the hips), you can shove the arm right beside your ear trapping the arm and the head in the process.

One common problem that a lot of novice players encounter is how to transfer to the other side without getting caught in a half guard position. What you can do once you trap the arm is to get your knee on your opponent’s torso. But unlike the knee on belly with an upright posture, you maintain your pressure on your opponent’s neck. You can use your head as your base and even actively post to prevent reversal. Now, you can do a windshield wiper by going to mount and finishing the choke from there. Another variation is to dismount and finish the arm triangle on the other side.

Arm triangles can also be done from closed guard. This is a good entry-level submission for novice grapplers since it is relatively simple plus it can be applied in a self-defence scenario. But to be able to do this, it is important to get your opponent to get the arm across. You can do this in different ways, but one efficient way to do it is by double-teaming on one arm. By doing a cross grip on your opponent’s wrist and the other hand controlling the tricep, it is easier to shove the arm across your centerline and to your hips. Next, you also need to break the opponent’s posture. This can be done by using your legs and redirecting the opponent’s head to the side where you are dragging the arm.

Now, you still haven’t threatened the opponent with a choke. Once the posture has been broken, you want to grab his lat to make sure that he or she can’t recenter by getting the posture back up. Next, the hand that was initially controlling the wrist will then sneak in to threaten the arm triangle position trapping one arm in between. From here, you can squeeze to finish the choke. And what’s good about this position is the fact that you can still threaten the back or go for a pendulum sweep.

How to Efficiently Deal with the “Answer the Phone” Defence?

However, if you are already on side mount, there are various ways to do it. A good way to do it is by going back to knee on belly to distract your opponent thinking about the pressure on his or her torso instead of just the choke. Others tend to post using their outside leg to drive more pressure into the arm that is defending the choke.

The arm triangle is a great submission that can both work both in gi and no-gi. It is a commonly seen finish for MMA as well. Brock Lesnar finished Shane Carwin using this submission during their UFC heavyweight bout in UFC 116. But one thing that a lot of people think is that arm triangles were designed for people who possess great strength.

In Judo, head and arm position is also used to pin the other person on the mat. Under judo rules, pinning your opponent long enough can give you an ippon. However, in BJJ, this isn’t the case. Arm triangle is a move that can finish the match or open up other submissions that can lead to other finishes.

One problem that practitioners encounter is when they are facing someone who is bigger or someone stronger than them. Next, you also have people concerned about their arms’ length. Practitioners with shorter arms are usually not that confident with their arm triangles. This is the same as the dilemma people have finishing regular triangles when they have short legs. So how exactly do you adjust and make your arm triangles more dangerous?

Arm triangle is harder to finish than your regular triangle simply because you only have your arms. And between arms and legs, legs are your stronger limbs.

Both arm triangles and regular triangles work because the person gets choked out by his or her shoulder. But for an arm triangle setup, the other side of the neck is blocked by the arm rather than the leg. This causes two things. One, it blocks the air going to your brain. Secondly, it also stimulates the vagal nerve to slow down the heart. It contributes to the lack of oxygenated blood going to the person’s brain. The next thing you know, it’s either a tap or the person goes to sleep.

Now, let’s get down to the mechanics of the arm triangle. I think that Ryan Hall has the best explanation for the arm triangle’s mechanics. He mentioned that if you are forcing the movement, you aren’t doing it in the most efficient way possible. According to him, you need the bicep wrapped around the heck while the collar bone is blocking somewhere in your opponent’s trapped arm.

The common arm triangle counter is the “answer the phone” defense. The goal of this defense is to create that space between your neck and your shoulder. Your opponent performs this counter by pushing your weight off and get his or her arm to the ear creating that small space needed to stop the choke. A common reaction is for your opponent to frame with the other arm just enough to create that small window of opportunity to defend the choke.

Another common counter to arm triangles is for the opponent to gable grip the near side leg. This is done by looking away from the opponent instead of fighting for the “answer the phone” defense. This counter is high percentage once the opponent was able to connect his grips. It allows the leg to do the work to create space and to make the choke less threatening.

So how do you make it better? While you have head and arm position, the goal is to keep check the shoulder and the person’s hip. By checking the shoulder, you will be able to ensure that the shoulder is in contact with the neck. Next, you also want to check the hip since this can be used to defend the choke by looking at the opponent and eventually creating a frame that could lead to the “answer the phone” counter that we’ve discussed earlier.

Ffion Davies described her preferred finish for the arm triangle by creating wedge by the hip using her knee and cupping the shoulder while setting up the arm triangle. Another detail that sets Ffion Davies’ arm triangle is that she creates a stirring wheel motion using her hands while maintaining a gable grip on head and arm position. What it does is close the space on the other side of the neck while keeping the shoulder tight.

Stephan Kesting, on the other hand, has another interesting variation when it comes to finishing the arm triangle. It’s also simpler. Instead of getting your hip flat on the mat, Stephan Kesting activates his foot and floats his hip. Next, the other foot is also posting making sure to help push the opponent’s hip and shoulder.

Different people have different preferences on how they grip while doing the arm triangle. Some prefer to do the gable grip relying mostly on leverage to finish the choke while others prefer to grab their bicep. Lanky individuals have the luxury of grabbing their bicep finishing it with a grip similar to finishing a rear-naked choke.

One thing that makes arm triangles a common submission is the fact that you can set it up from different positions. It can be coming from a scramble while the person is looking for an underhook or it can be coming from a kimura trap. In most instances, it has to do with your ability to impose pressure and deflect the frame.

Apart from the ability to get into the arm triangle position, you must know how to mix your attacks. For instance, if the opponent decides to gable grip his arm and hugs his leg, then you might as well hit an Ezekiel as a plan B from your arm triangle. Or perhaps, only implement arm triangles as a second or even a third attack once you’ve failed to get the back but you still have the seatbelt.

You can finish arm triangles with better precision. In addition to this, it is also important to find openings where you can setup this submission. And unlike in judo, it is more than just a pining position. It can be used as a real threat to your opponent. If done right, it’s an opportunity to finish the match early.