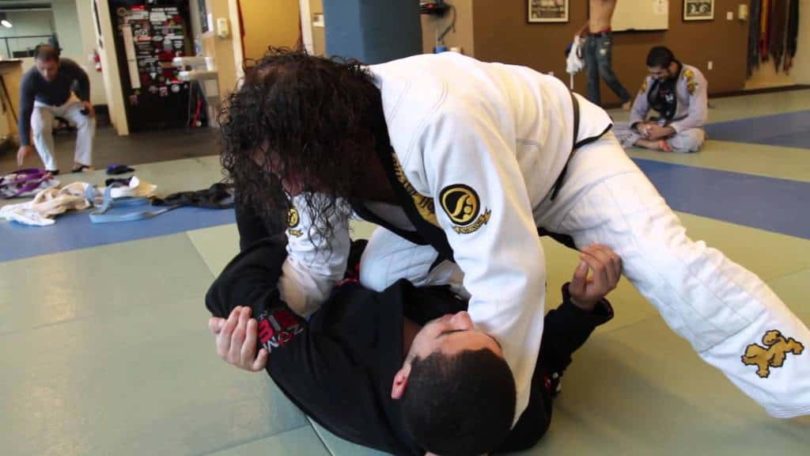 Knee on belly, knee on stomach, knee ride; three different names for one of the most painfully uncomfortable positions in Brazilian Jiu Jitsu. In today’s article we will be taking a look at some of the concepts and common uses of this position.

Knee on Belly Instructionals – Get 10% off with the code ATBK10

Knee On Belly Domination – Stephen Whittier
Knee on Belly – Lucas Lepri
While most lower belts have probably felt the crushing and inescapable pressure from their instructor or a higher belt in this position, unlike other side control variations, knee on belly is typically not the most effective position as a pin. In judo, it is known as uki gatame or ‘floating hold’, reflecting the transitional nature of the position.

Why is this so? The main reason has to do with the lack of overall body contact. In most side control variations, the top grappler is using his torso against the torso of the bottom grappler, with good chest-to-chest pressure. In addition, due to the close contact, the top grappler is also able to control the bottom grappler’s shoulders and elbows, which are very important concepts in maintaining a dominant pinning position. For more details, refer to our side control article.

Conversely, in knee on belly, the only points of contact would be the shin of the top grappler and hand grips. While using the shin across the hips is an effective form of control in that it is an effective stop against the bottom player reguarding, and grips, usually a combination between the lapel, pants, and cuff can add to the control and pressure from this position, the limited body contact intrinsically limits the ability of this position to be statically maintained for a long amount of time, especially when dealing with opponents of similar skill levels. For this reason, we do not see the knee on belly position on any visible level in the grappling sports of judo or wrestling.

How then is the position used? Well, it mainly serves as a form of transitionary dominant control, meaning that it serves as a ‘link’ between the other dominant positions. Furthermore, under traditional IBJJF rules, the knee on belly position is in and of itself worth 2 points, unlike side control, giving a strong incentive for the top grappler to utilize this position. It is also mostly only seen in the gi, as the lack of grips in no gi makes it even harder to control; in addition it also opens up the top grappler to dangerous leg entanglements.

While the reason behind awarding knee on belly positional points has not been fully explained, the most likely explanation is that due to the upright posture of the top grappler in that position, strikes are able to be more effectively delivered, again reflecting the vale tudo roots behind the BJJ positional hierarchy. However, it should also be noted that the knee on belly position is rarely, if ever, seen as a dominant ground and pound position in modern MMA, due to the lack of control.

Observe some standard knee on belly drills in the video below; you will see that the focus is more on transitions in response to your opponent as opposed to a pinning control. Further, many guard passes end up directly in the knee on belly position.

For an excellent example of the transitional use of the knee ride, take a look at Rafa Mendes’ movement in the video below. Notice how he switches the knee on belly from one side to the other and how its serves as a bridge between his passing attacks and transitions to other dominant positions.

When it comes to submissions, collar chokes, armbars, and triangles are all available, although at the higher levels, collar chokes are the most common as they do not make beginner rookie mistakes such as exposing the elbow by pushing on the knee.

To conclude, knee on belly is a position that is almost unique to BJJ due to its transitional nature linking guard passes and other dominant positions together, its reliance on the gi, and is lack of traditional pinning ability. However, it is no less important than other dominant positions as the ability to smoothly transition between positions is a key skill of good grapplers, and many submission options become available during transitions.