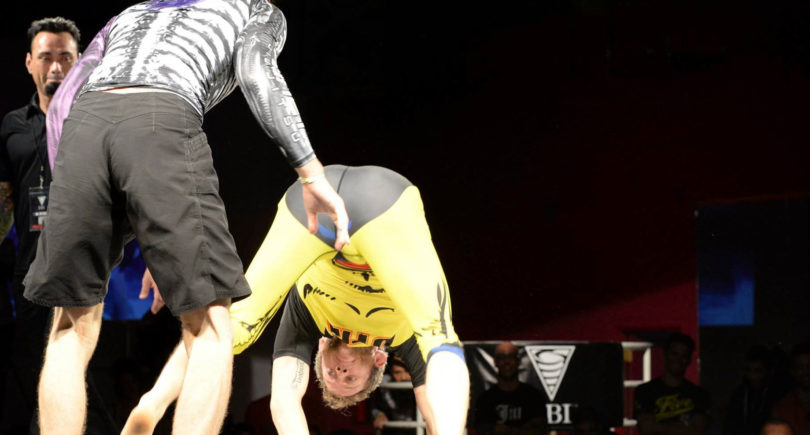 Jiu jitsu and respect go hand in hand. Over the years, the sport evolved and has become more casual. However, with its evolution comes approaches that more traditional practitioners consider disrespectful. One of which is the donkey guard that was developed by Jeff Glover.

The donkey guard originated as an approach to elicit a crowd reaction during Glover’s submissions only tournaments. He did this approach against Caio Terra in Metamoris. Today, it has evolved on its own and has even been dubbed as the modern 50/50 given the chance to go for a sweep and still maintain the same configuration that will most likely result in a back and forth action between two competitors.

Origins and the Basics of the Donkey Guard

The initial name for the donkey guard was the “reverse jumping guard takedown”. It was later simplified by internet users and given the name “donkey guard” given the action how you throw your legs while you turn your back away from your opponent. Jeff Glover was able to first use this in an ADCC tournament in 2011 when he faced Tom Barlow.

The original Donkey Guard was a takedown where you give your back to your opponent as a bait. As the opponent moves forward, you get to launch your legs backward and pinching the hip and closing your leg. At this point, you end up with a wheelbarrow position as you get to post with your hands.

You get to lunge the opponent forward while you dive underneath the opponent to gain access to his back. By opening your legs, you could end in a crab ride position that allows you to fight for the back or even opt to stand up and go for takedown.

A Variation of an Old Move

The Donkey Guard is a fairly new move that was developed and evolved naturally in the last ten years. However, its concept isn’t exactly new in grappling. The initial concept of the Donkey Guard came from Kani Basami which is a scissor takedown. The Kani Basami is banned in most BJJ and Judo tournaments because of the danger that it poses to the opponent’s knee. Jeff Glover developed a more competition friendly and a bit more risky version of the Kani Basami.

One of the hardest things to deal with when you get caught in a donkey guard is to remove the legs that are in a reversed closed guard position. As long as the legs are closed and the guard player can post and do a front roll, then there is always a threat of a sweep, a backtake, or a takedown from this position.

To approach the Donkey Guard, it is important to not let the legs close on your hip. Instead, you want your arms to pummel inside.

What if the guard player trapped your hip with a reverse closed guard position? You want to anticipate the dive forward and hold the pant. This way, the moment the guard player went for the typical dive seen in a Donkey Guard backtake or sweep, you are ready to fight for the back as well and make it a backtake battle.

The Donkey Guard is also dubbed today as the modern 50/50 especially among competitors in the lighter weight divisions. It happens when the guy from the bottom insists on the reversed closed guard position and be almost on the person’s back. However, since there’s a grip on the pants or the lower back using the belt or the gi, the guard player might be hesitant to open the legs and switch to a crab ride position. Instead, it becomes a see-saw fight wherein the bottom guy can let the top guy concede top position typically by attacking a toe hold. Once the sweep is completed, the now bottom guy will closed the legs to fight from his or her own donkey guard.

This scenario happened in a closely contested match between Isaac Doederlein and Mikey Musumeci during the Worlds.

Johnny Tama provided his perspective in the Donkey Guard position during an episode of Fix My Game with Johnny Tama from FloGrappling. He showed how a 50/50 can transition towards a donkey guard and even go for a leg attack from there. He touched on the subject when the opponent’s weight is leaning towards the other side that a 50/50 sweep is no longer feasible. He then showed how you can abandon a 50/50 and opt to close your guard in a reverse closed guard position and work a leg attack from here.

He showed a toe hold that can be used both as a sweep to get the top guy to concede the position or tap from the leg attack.

The Donkey Guard is an aggressive position where you can transition and work your kneebar and toe holds. It is even possible to transition towards heel hooks by unlocking the reverse closed guard position and focusing on your opponent’s leg.

Though it is an unconventional approach in BJJ that not a lot of athletes use this as their go-to strategy, the Donkey Guard has evolved on its own. It is a high risk but high reward move that can use your opponent’s aggression against him or her. However, there is also a chance that a guy with a good backtake can catch if you are sloppy with your donkey guard.

Many consider this as an impractical approach. However, it is always good for competitors to be familiar with the Donkey guard not only to anticipate the attacks but to also know when to exploit the position especially when you are forced to fight for advantages and points. This can be a good way to not only transition towards leg attacks but even win the intricacies of a tournament rule set.

Should you be going for the Donkey Guard from the get-go? As a competitor, this isn’t exactly suggested. You don’t get to see top competitors use this unless they are trying to impress the crowd. However, it’s an interesting position that has evolved adapting in a tournament set up.