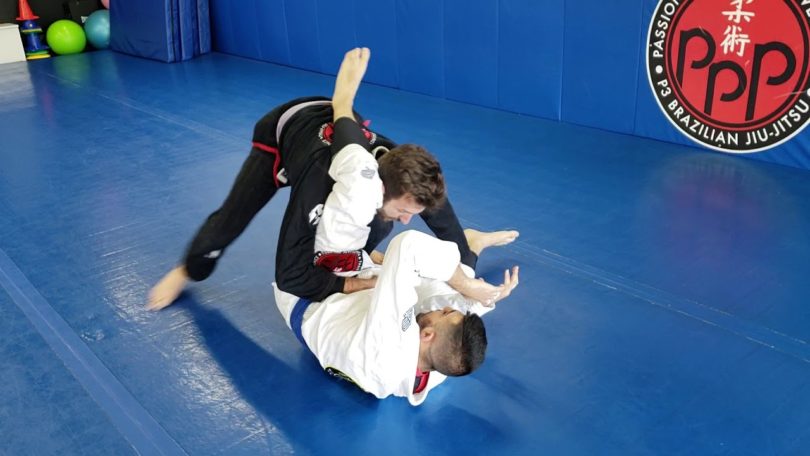 Stack passing was the dominant passing sequence of the 1990s and even to some extent in the early to mid-2000s. With guard play not as complex as to what it is today, stack passing was the go-to strategy of old school competitors. Pin the hips on the mat and be able to get rid of the legs in front of you. Many were even passing in kneeling position. But with more complex guards developed, things slowly changed. Spider guard for instance destroyed passers who stay on their knees. But today, modern stack passing has adapted to the modern guards as well. It is done kneeling, one knee up, or even standing.

There was a time when passers were doing a lot of leg drags to address guards. However, as the lighter divisions developed complex guards from Dela Riva to lapel guards, the number of competitors using stack passes increased over the years. The Miyao, for instance, evolved their pressure passing sequences to address the complex guards in their division. Under the guidance of Murilo Santana in Unity, they were able to come up with pressure passing tactics in combination with some brutal stack passes both in gi and in nogi.

How Does Stack Passing Work?

Stack passing’s concept is quite simple that there are different ways on how you can do it. Stack passing is a type of pressure passing sequence where you get the guard player’s knee on his face. What it does is fold the guard player’s spine in a very uncomfortable position that he or she is going to concede the guard.

Now that you have an idea of how to do a stack pass, what are the key features that should be present for an effective stack passing sequence? You have to understand that folding the opponent’s spine might be an easy step but keeping the knee towards the opponent’s face is the tricky part. Here, you will have to block the opponent’s lower back and impose pressure on down on his or her hips.

Also, there are two common variations to the stack pass. You either have the double under or the over under pass.

The double under pass is a good way to eliminate the legs, especially when dealing with a spider guard player. Apart from taking out the foot that steps on the bicep, it becomes easier to lift the opponent’s hip since you have two arms at play.  It can also be a good go-to pass once you’ve opened the closed guard.

There are different ways on how to lift the opponent‘s hip. Keenan Cornelius mentioned that he rather just grab by the pant and deadlift the opponent before he blocks the lower back using his knee. On the other hand, you have guys like Guilherme Mendes who walks forward to flip the opponent. He also opts to grab by the lapel over grabbing the pant because it stops the guy from shimmying forward to get the legs involved once again.

Another option is to go for an over under pass. Over under pass have different variations. There is an over under pass where the opponent isn’t exactly stacked but rather the hips are pinned which is something that Murilo Santana and Bernardo Faria love to do during their matches.

However, the over under position can also be used as a stack position. By grabbing the lapel instead of just the pants, it becomes possible to get the knee to the opponent’s face. The opponent needs to walk towards the side where he or she has control of the lapel to add pressure on the leg. Once this happens, you can switch the hand grabbing the leg and towards the hip to lift the opponent’s hip up. From here, you can block the lower back using your knee to control the opponent.

Finishing the stack pass can be tricky because a lot of guard players with flexible hips tend to get their legs at play even with the slightest space. To finish the stack pass, it is important to get your ear towards the opponent’s hip. This will leave no space for the opponent to recover using his or her legs.

Another good option during stack pass is that you can also opt to fold the opponent in a leg drag position.

Stack passing can also be done once the opponent inverts. Why does one invert? There are instances when the pressure is too much for the framing and scooting to work. In this scenario, guard players ball up and invert to re-center their guard.

Once on upside down, the legs can be pinned down using the arms before you go towards the opponent’s side to replace one hand using your knee. You can then continue passing and place your ear right beside the opponent’s hip to finish the pass or opt to go for a leg drag.

Finding the Back from Stack Passing

Finding the back from a stack pass is also possible. There are different ways on how to do this. One of the more common and less risky way to do it is by having a leg drag position first. The guard player usually sticks a stiff arm to avoid the passer from stabilizing the position. In this scenario, what the guard passer can do is to turn away and do a front roll. However, the passer needs to maintain a collar grip to be able to stay attached to the opponent and then fighting for the crab ride before eventually securing both hooks in.

Another way to do it is coming from a double under or when you grab the opponent’s pant right in the middle of the spine. You can pull up to make the knees go up in front of the face. From here, you can do what Travis Stevens did to the Miyao in one of the Copa Podio tournaments wherein he stacked the Miyao and fought for the small space for a backtake. He does it by sliding perpendicular to the guard player and then fighting for the top hook first. But since he has both grips by the pant it is easier to choose which side to attack.

You don’t know anything about the pressure of passing guard…

Following on from his first teaching, Professor Paul Schreiner is back to dive even deeper into his precise pressure passage system! Considered one of the most basic styles of guard passage in Brazilian Jiu Jitsu, the stack pass is the basis of all pressure passage systems. Modern passing styles such as leg passes, long steps or floaty passes rely heavily on speed and athleticism, but the stack pass relies on position and patience.

With this teaching, Paul Schreiner focuses on the micro/macro movements, position and grips that will make you an effective pressure protection passer, without having to drill for hours on end on a pass that might work.

If you want to pass with more pressure, check out this instructional from Digitsu and get 10% off with the code ATBK10.