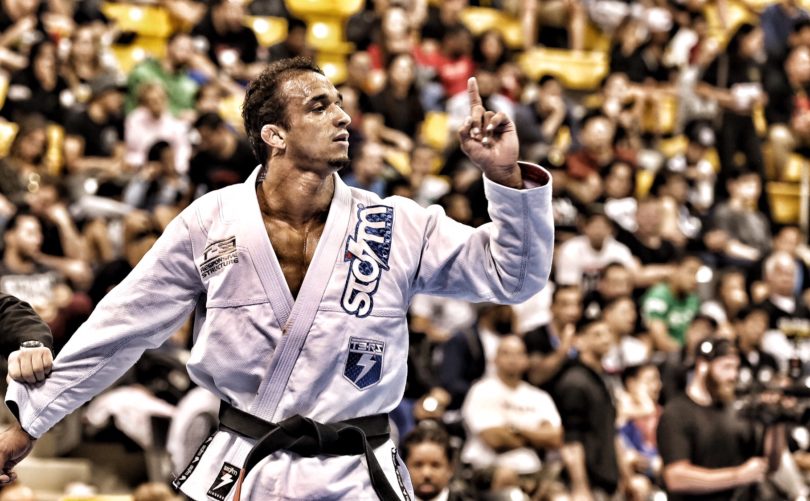 Rômulo Claudio Barral has been one of the most consistent performers in the BJJ/grappling arena ever. Since getting his black belt in 2005, he has been extremely active and competitive in the black belt divisions, winning the IBJJF world championships 5 times, including three years in a row from 2012 to 2014. All of this too in the highly competitive meio-pesado (194lbs) division where your technique and your athleticism/strength specifically has to be on point to even stand a chance.

He is also an ADCC champion (2013), IBJJF World No-Gi champion (2009) and has fought in MMA twice, winning both fights via submission.

Romulo’s first foray into martial arts was not with Brazilian jiu-jitsu, nor with MMA. It was with the striking art of Tae-Kwon-Do. He began training Tae-Kwon-Do at the age of 8, after watching martial arts movies on television and wishing to emulate them. He joined a local gym and actually stuck with the art for over ten years before quitting around the age of 19. He had even gone so far as to earn the coveted rank of black belt in Tae-Kwon-Do.

Feeling confident in his striking ability, Barral wanted to take a stab at MMA. He was smart enough to realise that the flashy kicks of Tae-Kwon-Do wouldn’t be enough to stop opponents who could grapple with him, take him down, etc. So at age 15 he began cross-training in jiu-jitsu at the famous Gracie Barra academy under BJJ legend, Vinicius “Draculino” Magalhaes. His initial intentions were to learn just enough BJJ and grappling to prevent himself from being out-grappled so he could win in MMA via strikes. Over time, however, this changed. Tae-Kwon-Do slowly but surely began to take a back seat as Romulo fell in love with the art of BJJ. His BJJ skills began to grow to much higher levels than his Tae-Kwon-Do skills ever were under the careful tutelage of coaches Draculino and Cristiano Lazzarini.

Romulo would go on to fight in MMA twice; once in 2004 and again in 2009. Both fights were won via technical submission (rear naked choke). Whilst he did fulfil his dreams of fighting in MMA, he decided to focus on BJJ and competing in both the gi and without rather than taking a serious run at an MMA career. With the new wave of jiu-jitsu, such as schools like 10th Planet JJ, many people have taken the gi off completely and now train without it. Especially those who train jiu-jitsu for MMA purposes. Though even with taking relative breaks to fight MMA and competing heavily in No-Gi competitions, Romulo continued to train in the gi. Even when training for huge no-gi competitions such as ADCC, Romulo still chose to train heavily with the gi and openly espouses his beliefs that training with the gi can improve your grappling in every area.

Dominating in both Gi and No-Gi

At the end of 2005, after achieving much success at the purple and brown belt levels competition-wise, Romulo Barral was awarded his black belt by his head coach, Draculino. Despite this previous success, Romulo’s career really started in the black belt division.

After earning the rank of black belt, Romulo began to compete immediately. In 2007 alone, months after getting the black belt, he competed and won against extremely tough and established athletes such as Rafael Lovato, Thales Leites, and both Saulo and Xande Ribeiro. These big wins would also net him a gold medal in the -88kg category IBJJF World Championship as well as a silver in the absolute division, solidifying himself in the eyes of every other competitor as a force to be reckoned with.

He would forgo competition in 2008, after such a successful yet tough and stressful competition run in 2008. In 2009 he was reinvigorated for competition and won both the IBJJF World Championship in Gi and No-gi, as well as taking home a silver in the Pan Am’s.

Whilst still keeping active in competition, Romulo’s focus has been slowly but surely twisting onto teaching and coaching rather than stepping on the mats himself. He currently runs a Gracie Barra affiliate school in Northridge, California, USA where many top GB students choose to train and compete out of. Before this, he taught at Alberto Crane’s academy in Los Angeles, which gave him both experience in teaching as well as helped him get used to life in the United States.

But his students at his Northridge academy aren’t the only ones lucky enough to have learned from him. With big high profile wins in major competitions such as the Worlds and the Pan Ams, many people took note of Romulo’s skills and sought out his expertise. MMA stars such as Dan Henderson for example have both trained with and sought coaching from Romulo, showing that his BJJ is for both the mats and the cage.