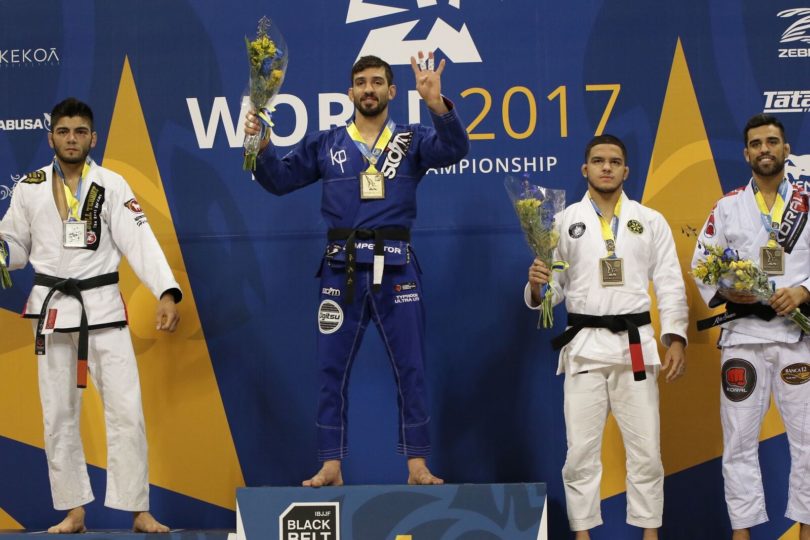 Lucas Lepri is one of the most decorated and successful champions in BJJ history, in the ultra-competitive lightweight division.

He’s won pretty much every competition that there is to be won in the game, including winning the IBJJF World Championships in both gi and no gi as a lightweight.

On the way to these highest of accolades, he has faced and defeated stiff competition at the black belt level such as Ryan Hall, JT Torres, Cyborg Abreu, Leandro Lo, AJ Agazarm, Paulo Miyao, and many more.

Lucas Alves Lepri was born in the city of Uberlândia, Minas Gerais, Brazil on 19th September, 1985. Growing up, Lucas was incredibly energetic and active and tried his hand at a variety of different sports. He showed promise in several, such as Judo, Capoeira, futsal, skating and swimming.

He was talented and skilled enough that he competed in several of these sports and even had an early taste of sporting success. This early experience of competing, and winning, in general competition would aid him immensely in his illustrious Brazilian jiu-jitsu career.

But with this already full sporting schedule, Lepri didn’t have the time to get involved in Brazilian jiu-jitsu until the year 2000.

Around the age of 14/15, he watched Fernando ‘Margarida’ Pontes preparing for the 2000 Pan-Am competition on an MTV show called “Vinte e Poucos Anos”. The footage of Margarida training hard and grappling piqued Lepri’s interest in regards to BJJ. Lepri was aware of BJJ and that it existed as a sport but had paid it no mind until watching this footage. Watching the high level Margarida roll and submit his opponents lit a fire for jiu-jitsu under Lepri and he was soon searching for a local gym that he could train at.

After a short search, he found Elan Santiago’s gym and began attending classes there. Elan Santiago, seeing the immense potential in young Lepri, soon took him under his wing and provided him guidance and support. With Elan’s help, Lucas began to compete in the local scene and found immediate success there. He took to the sport like a duck to water and began taking home medal after medal.

Santiago switched his affiliation from Brazilian Top Team (BTT) to Fernando “Tererê” Augusto’s gym in Sao Paulo, Brazil. As one of Santiago’s most promising students, Lepri followed him to Tererê’s gym and trained there until the team closed in 2004. Rather than returning to BTT, Santiago and Lepri joined the Alliance Academy, one of the most famous and well-known Brazilian jiu-jitsu gyms on the planet.

In fact, Alliance are actually the most successful team. Ever. In the entire history of the sport.

Alliance has produced a ton of champions in every weight division, gi and no gi, and more gold medals than you could count. A lot of their top black belts have left to forge their own paths and build their own brands and academy but yet Alliance still remain one of the most dominant teams in the sport. With all this great history and experience, Lucas Lepri continued to flourish even further than before. With both world-class coaches and world-class training partners, his abilities were growing. These coaches could offer him advice beyond just growing his BJJ skills such as how to mentally prepare for top level competition, mindset, etc.

He was awarded the coveted black belt at the end of 2006, after coming close to winning a world title at brown belt level. Many top-performing brown belts experience a dip in performance once they achieve the rank of black belt; all of a sudden they’re competing against athletes who may have had their black for a decade or longer and all the knowledge and experience that comes with time. But this was not the case for Lucas. Surprising everyone, except for his coaches and himself, Lepri won the IBJJF world title in his first year as a black belt.

In the following years, Lepri would go on to prove that this win was no fluke. As of 2018, he has won six IBJJF world championships, three IBJJF No-Gi Championships, five IBJJF Pan American Championships and a ton of other highly prodigious competitions. Even in the rare event when he doesn’t win, he normally picks up the silver or bronze medals for his troubles.

Even while sticking to a rigorous and hectic competition schedule, Lucas Lepri still manages to teach regular classes and occasional seminars. He moved to New York City in 2008 to fill a vacant instructor spot in Alliance’s NYC academy. People who live and train in NYC have a ton of options to choose from when it comes to grappling, including Renzo Gracie’s gym and Marcelo Garcia’s academy. Despite this heavy business competition with other gyms, Lepri manages to keep a full gym and full trophy cabinet that will only continue to grow even larger with time.