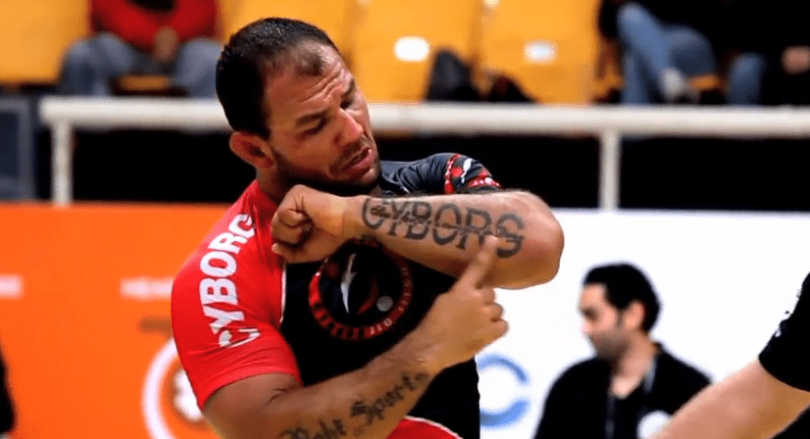 Roberto Abreu’s story is one of triumphing over adversity.

Abreu came up in the countryside near Campo Grande, Brazil. With little exposure to Jiu Jitsu, the future heavyweight standout was nonetheless drawn to the martial arts, practicing Karate, Judo and Capoeira. Like many tough rural kids Abreu grew up fighting, which led to his introduction to Jiu Jitsu at the hands of an adversary of slight build whose submission techniques intrigued the young Roberto.

How is this guy half of my size choking me out? I didn’t even know what a choke or armbar was. When he did that, I went crazy! I told him, “You have to take me to this place to learn this.” I was 17, and I started training. With two weeks of training, I won my first tournament. From there, I never stopped.

Abreu rose steadily through the ranks of Jiu Jitsu, having a dominant competition record from the start. But this success wasn’t until an event in 2000 nearly destroyed his fledgling career. After living and training in Iowa, USA for a short period of time Abreu was involved in car accident that resulting in his left arm being badly mangled. Working hard to overcome his injury, Abreu won the Brazilian Nationals four months later. His rapid recovery and never-quit attitude earned him the nickname “Cyborg” by a Carlson Gracie black belt.

When the doctor took the 300 stitches from my arm, the next day I was training. I was already watching training every day when I was hurt. I would cry from the pain because I wanted to train so bad. I think that made me heal so fast. My arm wouldn’t stretch anymore. I said, “Armbars are going to be the best way to get my arm back in place.”

In addition to his accident, Abreu’s progression was sidelined when a disagreement with his instructor caused them to split ways right after getting his purple belt. Undeterred, Abreu started his own fledgling gym – Fight Sports. Today Fight Sports is one of the premier training centers in Florida, with affiliates throughout Brazil, the US, Europe and Canada. Abreu received his black belt from Carlson Gracie black belt Francisco “Toco” Albuquerque of the Nova Geracao team.

Roberto “Cyborg” Abreu vs. Bill Cooper – if this doesn’t get you stoked you should probably quit Jiu Jitsu.

Still affiliated with Nova Geracao, “Cyborg” Abreu has recently partnered with Paplo Popovitch and Wagner Rocha to form the Avengers Team – a south Florida-based Jiu Jitsu competition team also partnering with American standouts Albert Hughes and Hillary Williams, and Canadian standout Jake Mackenzie. While the name of the team leaves something to be desired, no one can deny that The Avengers haven’t shaken up the Jiu Jitsu landscape, particularly in no-gi competition. As a small aside – awesome purple belt and friend of The Jiu Jitsu Lab, Joe Ronsano, designed the cool-looking The Avengers logo.

Abreu is also famous in the Jiu Jitsu world for his high-level use of what he calls the tornado guard. Basically an inverted half-guard, Abreu uses the position to load his opponent onto his extended leg and dramatically sweep them vertically overhead. Abreu has been developing this position since his blue belt days and also transitions to a triangle and omoplata from the sweep.

Cyborg’s competition record shows what a person can achieve if they put their heart and soul into what they love. When we think of Jiu Jitsu fighters struggling against the odds we may think of the smaller man using technique against the goliath. So it’s unusual to think of a massively strong athlete like Roberto Abreu in this regard. However, coming from a place with no Jiu Jitsu and finding his path in the gentle art, recovering from a devastating accident to become a Jiu Jitsu champion and emerging from an ugly spit with his instructor to not only start his own gym but form a network of training facilities the world over – these are how Abreu made his mark on our sport and overcame the obstacles in front of him.