Polaris 10 once again showcases some of the UK’s and world’s best grapplings in their unique submission-only format. This year we saw three title fighters for the featherweight, lightweight and middleweight title, which features the return of competitors such as Nicky Ryan, Ash Williams and Craig Jones.

Check out the full results on Polaris 10 below. Many thanks to Angelica Glapiak, who was there on our behalf to take these great shots. 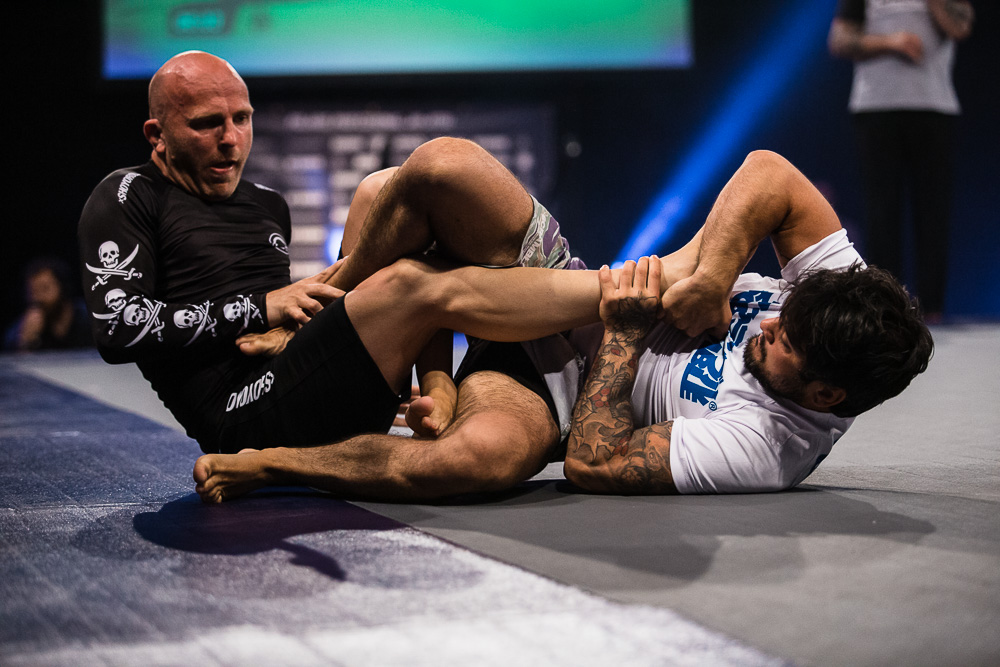 The first prelim match of Polaris 10, is the qualifier match, where both Spencer Hewitt, who was also at Polaris 4, and Michael D’Aguair competed at the BJJ British Open for their spot on the Polaris mainstage.

The match is a cagey opening affair with both competitors feeling out their opponents through a series of collar ties and takedown feints. It’s only when D’Aguair sits to guard is when any kind of grappling happens. D’Aguair has the lion share of submission attempts in the final two rounds of the 10-minute bout to seal his first victory on the Polaris stage. 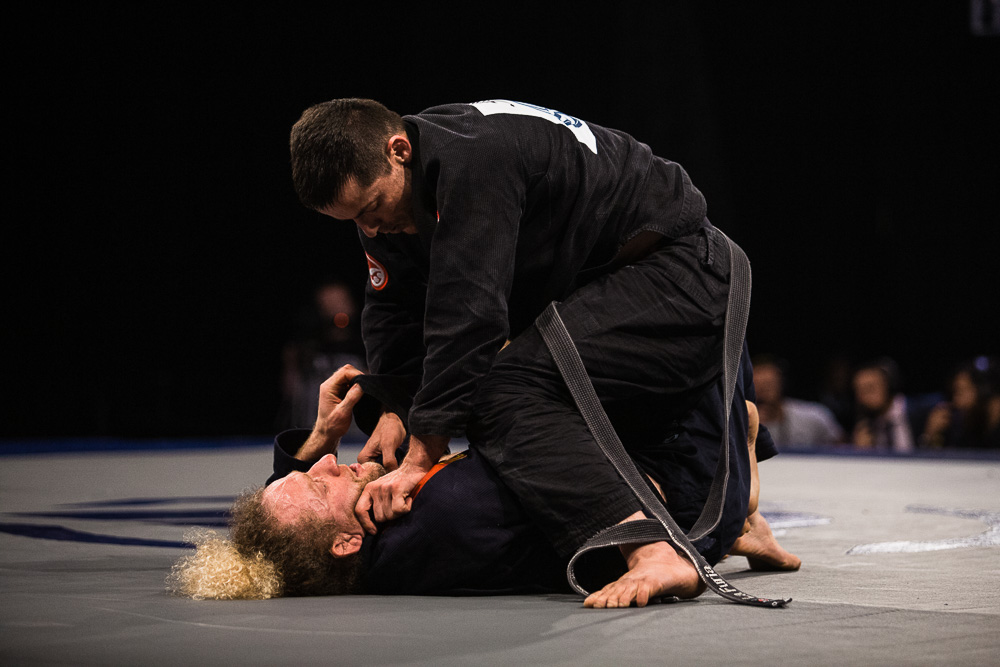 The first Gi match of the night features Fight Sports Enrique Villasenor against local competitor Trevor Birmingham. Overall the match is an excellent display of how Jiu-Jitsu basics can work well to shut down an opponent’s game plan.

Villasenor starts the match with a closed guard, which eventually allows him to get a collar drag to reverse the position. He then spent the rest of the match on top looking to pass Birmingham’s guard, not allowing his opponent to work on his game plan. 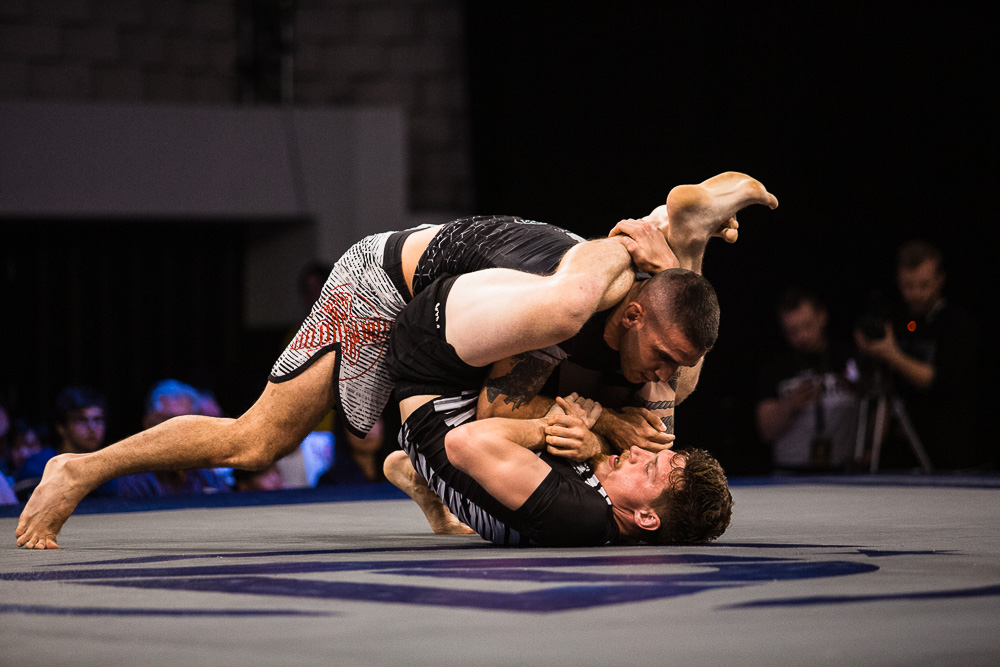 Unfortunately for Chioutakos, he doesn’t really get going through the match, with Robson scoring an early takedown into mount within the first 10 seconds, which then sawChioutakos fighting from behind.

And this is how it went for the entire match with Robson dominating the match with various submission attempts, where he eventually was able to secure a tight kimura from side control, which he finishes through a straight armbar modification. 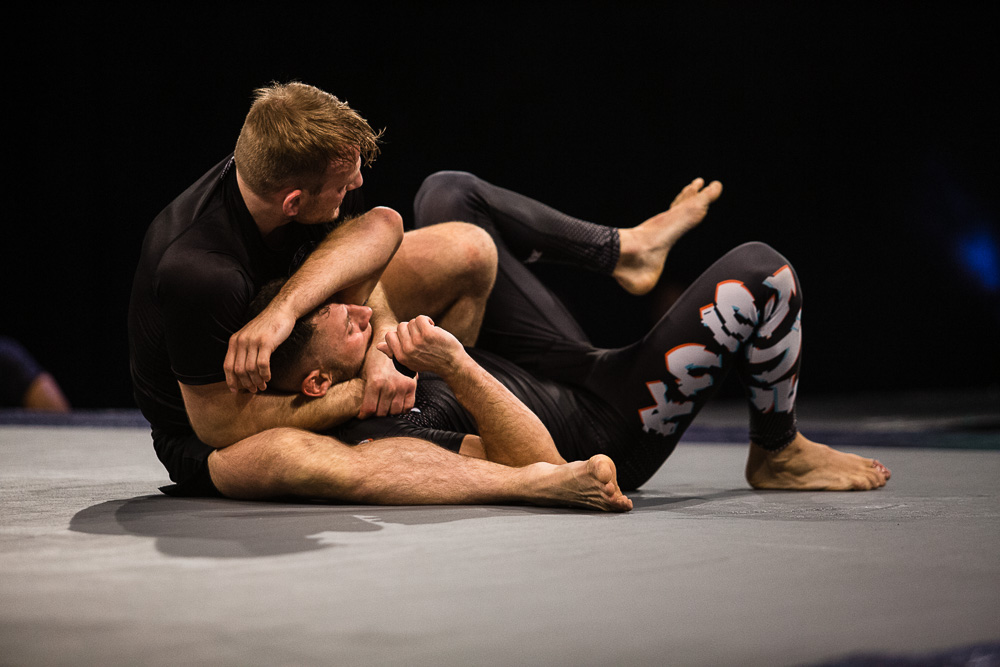 This fast-paced match starts off with Bournemouth local Luiz Finocchio get a surprise takedown on Pedro Bessa black belt and Common Wealth judo champion Craig Ewers, which sees him looking to defend his back as Luiz attacks the rear naked choke.

The high output match continues with multiple scrambles and back takes before Ewers secures a backtake of his own, where he transitions to armbar for a quick tap after just 3 and a half minutes.

An excellent win for the Welsh competitor Ewers. 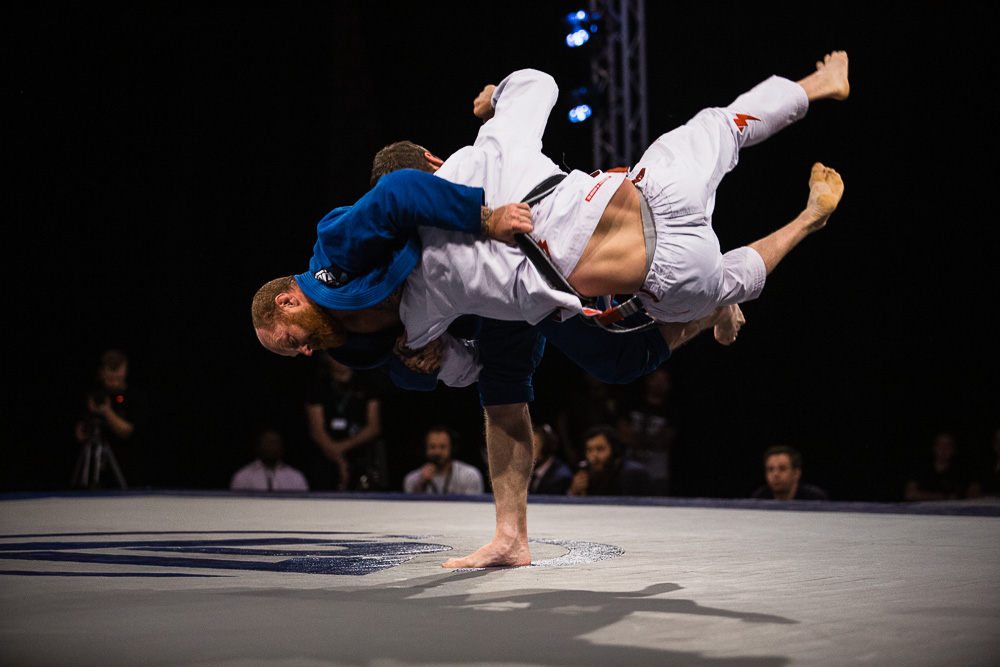 Jeff is known by many in the BJJ scene for his match, which went viral after he caught his opponent Paul Bridges with an Ippon Seonagi, straight into an armbar back at Polaris 4.

The match starts off with a bit of gamesmanship from Lawson, goading his opponent to grip up with him. But Roberts had plans of his own with an attempted flying armbar, which lands himself in hot water. Roberts then has to defend a tight leg scissor, armbar combination from Lawson before continuing on.

The match then continues with Roberts reversing Lawson’s attempted head & arm choke before finally getting to mount to work on his own game plan.

The match continues with a beautiful butterfly sweep into standing Harai Goshi from Lawson as the momentum shifts into his favour.

Here’s it’s all Lawson from an omoplata attempt he is able to take the back of Roberts. After a transition from the back to the armbar, Lawson is able to separate the hands of Roberts and get the tap.

An excellent matchup between these two competitors, who once again show that Gi matches are definitely not boring. 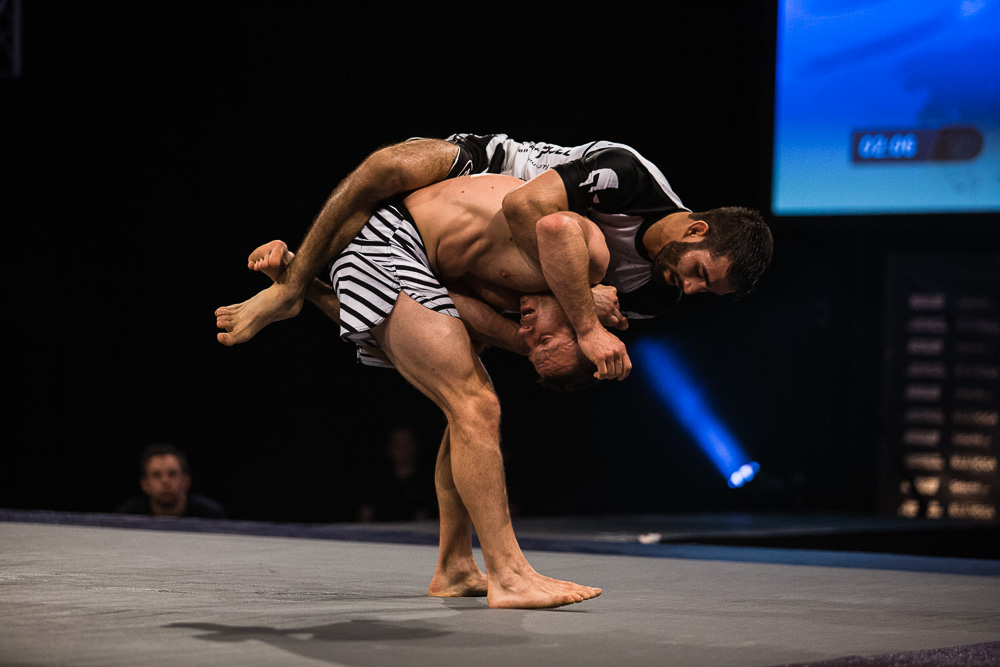 The co-main event of the prelims sees Polaris’ veterans Igor Terreco and Phil Harris square off in a 10-minute matchup. The match starts with Terreco pulling guard, looking for inversions and back leg entanglements while Harris looks to press forward with his own attacks.

The first 5 minutes of the match is a cagey affair with Harris trying to pass and Terreco looking for some loose entanglements, it’s not until Terreco finds the back on Harris, that’s when momentum starts to shift in favour of the competitor from RGA Gymbox.

Here Terreco rides the back of Harris for the rest of the match up until the last 10 seconds where Harris attacks a toehold but it’s not enough to secure him the win. 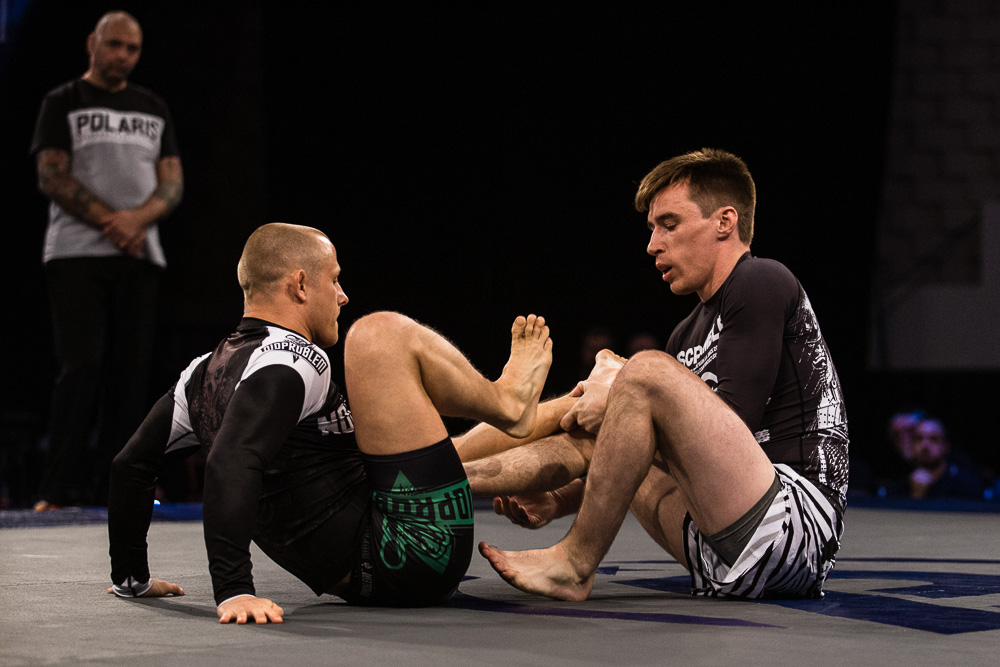 The match starts with Skinner pulling guard straight away with both competitors pummeling their legs looking for the footlocks during the first two minutes.

The match continues as both competitors scramble for the back position where Skinner is able to apply a modified Estima/straight footlock to get the tap. An excellent win for the young prospect from Australia. We’ll be looking forward to seeing more of him. 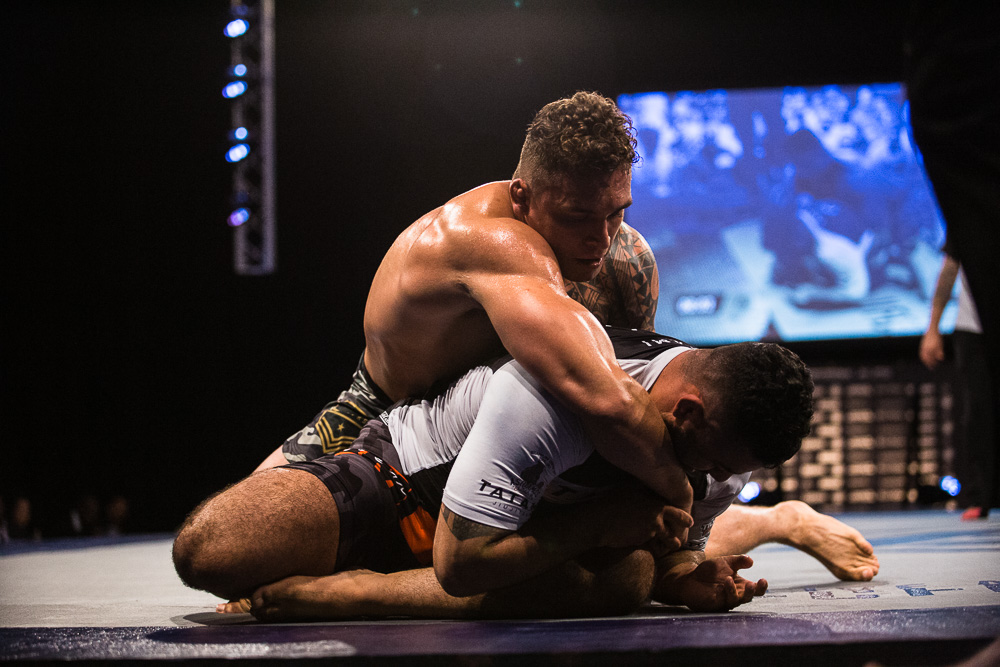 The first main event match of the evening features breakout star Nick Rodriguez against returning Polaris competitor Ash Amos. These 105kg giants start off the match on the feet feeling out each other’s skills. But this is where the match starts to turn in favour of Rodriguez, after an excellent sequence from a slow single to a fireman’s carry takedown, the D3 wrestler from New Jersey starts to build momentum. 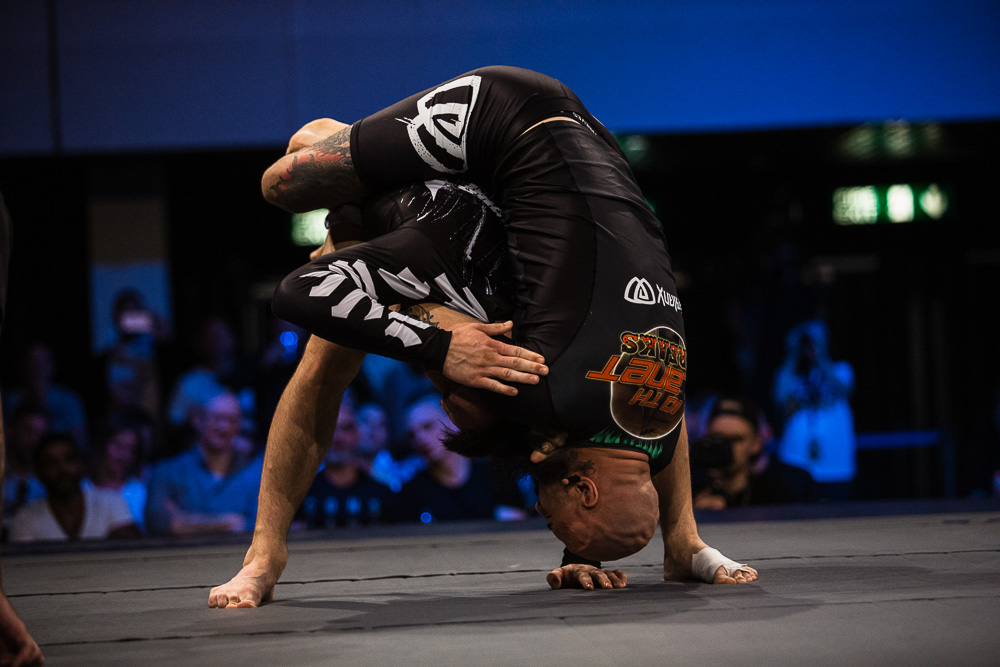 A match which was touted as a leglock battle features 10th Planet freak Richie “The Boogeyman” Martinez going up against Polaris veteran Miha Perhavec.

Miha, who has a 3-0 record on Polaris was looking to climb up the professional grappling ladder, but he had to get past the Boogeyman first.

Unfortunately, after a strong start from Perhavec with a big Harai Goshi sees him on top, he made a small mistake which saw Martinez come up and secure back position.

Even though he looked like he was going to escape the back position from standing, Martinez’s squeeze from the deep RNC was too deep forcing him to tap after 53 seconds. 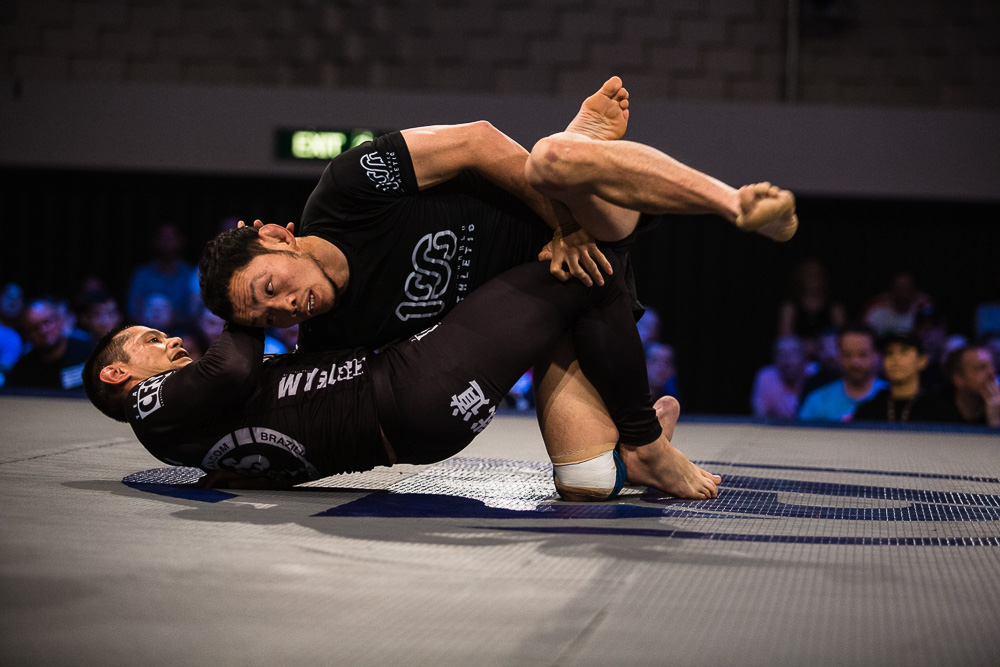 The third match of the evening saw Japanese MMA legend Caol Uno go up against Leigh Remedios, who was a replacement for Brad Pickett, who was originally scheduled to compete.

After 2 minutes of hand fighting, the match is eventually taken to the ground by Uno, who catches Remedios with an arm drag, eventually taking him down.

The match then continues with Coal working the top position, looking to pass while threatening with a Kimura grip, which he eventually secures to finish a methodical submission. 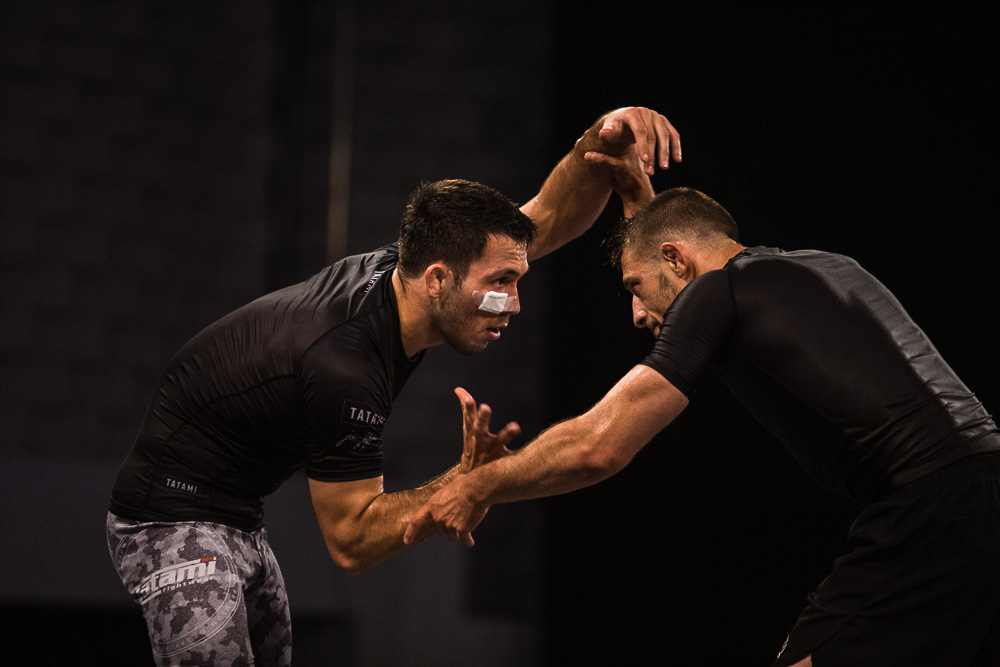 The first of our three titles matches of the night features Welsh grappling star Ash Williams up against Canadian Ethan Crelinsten. Ash, who has had 9 months out from competitive Jiu-Jitsu was seen as the underdog during this matchup, but that didn’t mean he wasn’t game for a scrap.

The first five minutes starts off as a scrambly affair, with Ash securing a takedown and working top positions. Both fighters both having an incredibly high work rate trying to and implement their own game.

The second third of the match is a more leg locking affair with both fighters looking to attack the feet, with small submission attempts from both fighters this part of the match was all about dominating the inside leg position. A guard pass and mount secure Crelinsten the second round making it one round a piece.

The final period of the 15-minute match is all the play for with both fighters really going for it, the beginning of the five minute period sees Crelinsten desperately looking for Williams’ back until the match was stopped for a gash on Williams’ face giving him a much-needed respite.

After the break, both fighters go for it, with a takedown attempt, and sweep pass securing Williams the Polaris Lightweight title. 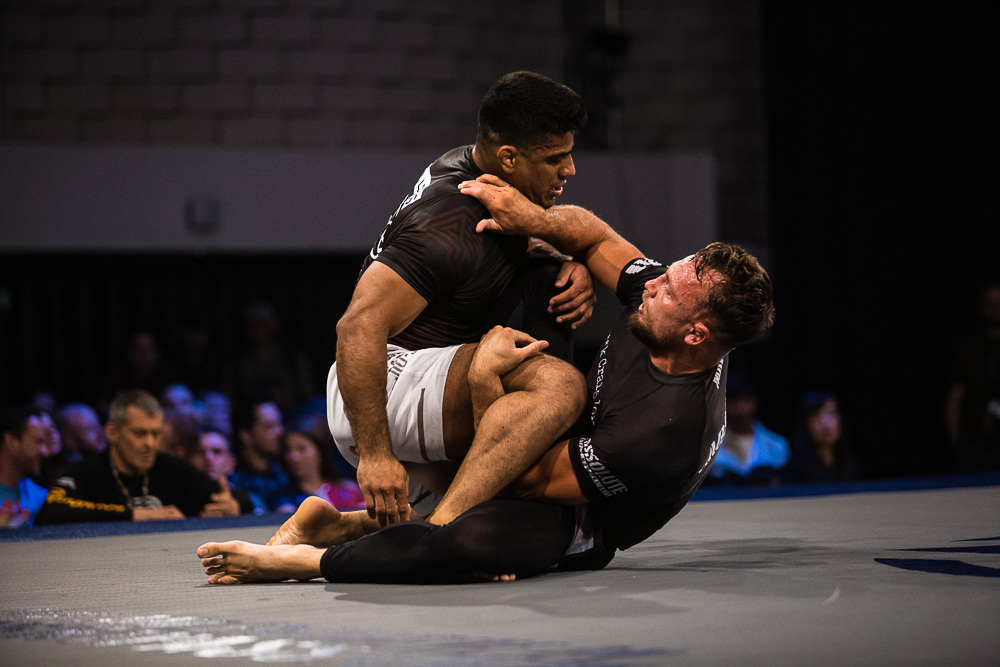 The match is a bit of a standup affair, with both fighters not looking to pull guard. With Lutes’ aggressive top game, Jones was always looking to play a top game.

After the first 5 minutes, Jones then sits to guard to look to play his Z-Guard game. Ultimately the match continues with Lutes looking to pass Jones’ guard without much success.

The match becomes more of a tactical battle between the two competitors with Jones coming out on top to retain his title. 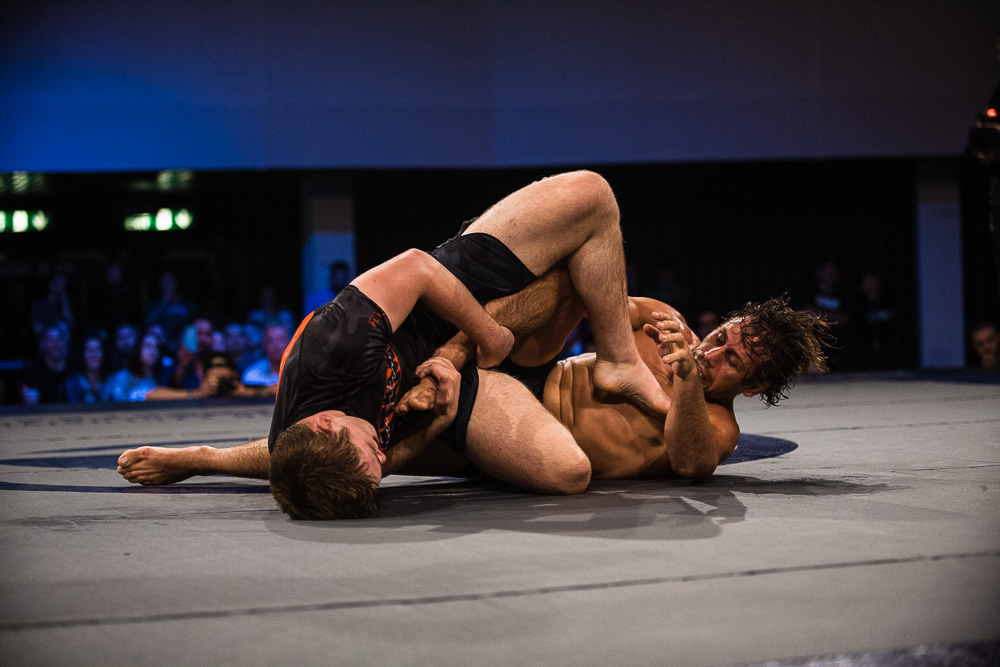 Unfortunately, Faber doesn’t really have an answer to this as he looks to compete to not lose instead of win. The most significant moment during this match was Ryan’s inside heel hook attempt, which Faber managed to defend by rolling to the edge of the mat. Other moments include Faber treating the match like a combat Jiu-JItsu event with a bit of slapping to Ryan’s body and head.

Overall Nicky does enough to retain his featherweight title, to round off another great night of grappling at Polaris 10.