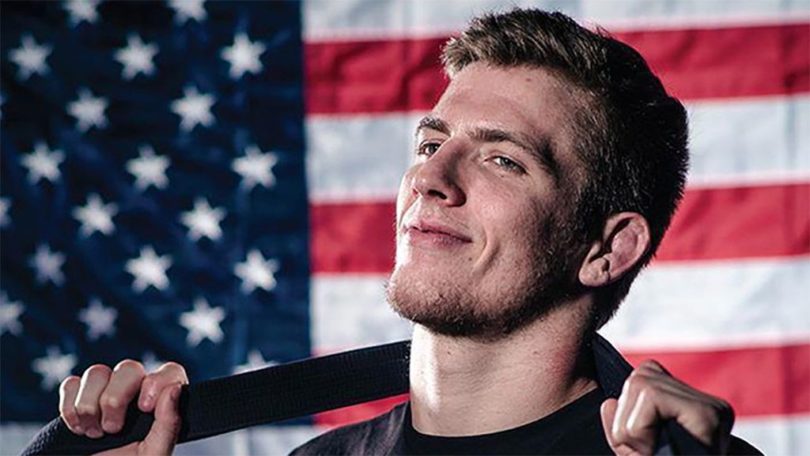 Born in Hawaii in 1992 Keenan has been around martial arts his entire life. Tom Callos, Keenan’s dad, was a 6th degree black belt in Taekwondo began teaching a young Keenan Cornelius as the tender age of 4 years old. However the martial art wasn’t for Keenan and he soon stopped his training. At the time Keenan’s dad, Tom Callos also had an interest in grappling sports, he was a fan of the early days on MMA and UFC and it was actually Callos, who introduced ‘The Prodigy’ BJ Penn to the sport of Brazilian Jiu-Jitsu.

At 14, Keenan began to get interested in Jiu-Jitsu after his father earned his blue belt and opened up his own gym to start teaching a small number of Keenan’s friends who had previous wrestling experience and wanted to expand their ground game, they were also all huge fans of the UFC and wanted to emulate their idols in a controlled environment. Eventually Keenan was graded to a Juvenile green belt by Carlos Valente.

When Keenan turned 15, his enthusiasm for the sport grew, however the long commute to Casio Werneck’s gym only allowed him to train a few times a month, instead of the full-time he would have like to have done. At Casio Werneck’s gym, Keenan was introduced to Andris Brunovskis, who’s friendly rivalry started to push Keenan’s game further.

Later Keenan’s father decided to take him to BJ Penn’s academy in Hilo, Hawaii, where they would train for the weekend. Here Keenan was able to spend time with his idol and train as much as he could, this really sparked a fire inside, enough so that when Keenan decided he wanted to go to college, he would move to Hilo to study and train every day.

Keenan trained consistently every day for two years at BJ”s academy, however this was during the time his career was flourishing in the UFC, so he was not available to train very often. During this period, Keenan would also spend a lot of his training time dropping into other gyms to improve his game. Over time there was a lack of black belts training at BJ’s gym and the school became less focused on the Gi, due to BJ Penn’s MMA success.

After medaling at a NAGA event, Keenan was promoted to purple belt but he felt like he wanted more. During a conversation with his childhood friend Andris Brunovskis, he was introduced to Lloyd Irvin and his full-time training facilities. This was where Andris was currently training at the time. Eventually Keenan would leave Hawaii to train full-time with Master Lloyd Irvine, where his skills would flourish.

When Keenan started training full-time at Lloyd Irvine’s he was also surrounded by world class talent, Keenan’s day-to-day training partners included DJ Jackson and many-other high level competitors. During this time at TLI, Keenan was instilled with the drive that has become to foundation to his skills today, at purple belt, he won every major championship and even began to forge a rivalry between Paulo Miyao, who would regularly meet him at absolute finals.

However, one of the crowning moments on Keenan’s career was his win at Lloyd Irvine’s Brown Belt Kumite. During this unique tournament, Keenan would have to fight numerous fighters over the course of several days. The brown belt Kumite was a turning point in professional jiu-jitsu, as this was probably the first time that cash prizes were introduced into the BJJ world and also the idea of no time-limit submission only rounds.

However, things took a turn for the worst in 2013, where Keenan decided to leave Team Lloyd Irvin after a fellow team mate Jason Shultz revealed that a female member of the team was being molested. In a statement released on Facebook Keenan announced he was leaving TLI after conversation with his family, who were publicly campaigning for him to leave Maryland. Keenan later revealed that his mum and dad would regularly be knocking on his door pleading for him to leave. At the time Keenan had no place to call his Jiu-Jitsu home.

Later in 2013 Keenan moved to San Diego and announced that he would be training full-time under team ATOS  under Andre Galvao. Here Keenan began to forge his unusual Jiu-Jitsu game. After competing under the ATOS banner for a number of months, he was promoted, on September 14th 2013, to black belt by his instructor Andre Galvao.

Since becoming black belt Keenan has won numerous titles and has competed at the very top level of Brazilian Jiu-Jitsu. He invented some of Jiu-Jitsu’s most modern techniques, including the worm guard, the wrecking ball pass and many others. All of his techniques can be found on his instructional site Keenan Online.