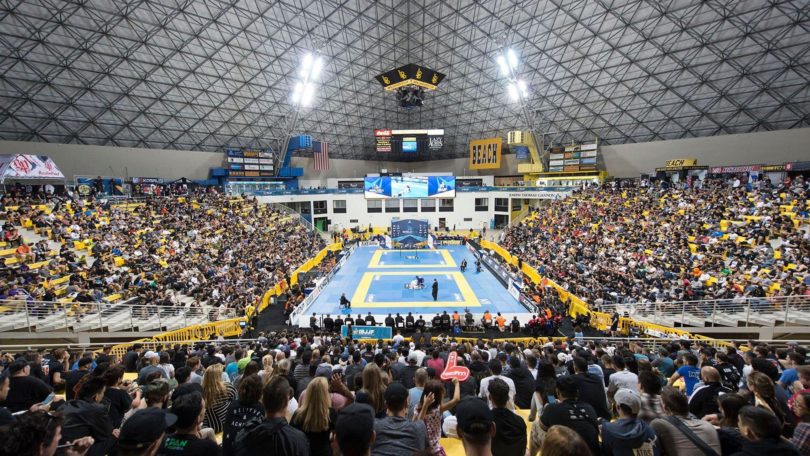 The start of the 2019 IBJJF World Championships is just around the corner.

Every year Worlds makes names and breaks hearts as it’s the one that counts. Everyone wants the top spot, but like every competition, only the dedicated few will make it to the hallowed podium. And this year’s world’s is no different, the big names are out in force ar Longbeach, California as they all look to make and break their own records and be crowned king.

In a surprising twist, Bruno Malfacine is back in the Worlds 2019 roster. In 2018, after an incredible 10 black belt world titles, Malfacine left his belt on the mats symbolising his retirement from competition, but it seems the podium calls to him once more as he’s back looking for title 11.

Names such as Buchecha, Lo, Lepri and more are all back to defend their legacy, but this year we’ll be seeing the young guns go after their slice of history. Sophomore black belts like Kaynan Duarte and Levi Jones-Leary are here to make their mark.

On the women’s side of the bracket, we have the Welsh phenom Ffion Davies in the featherweight division looking for her first black belt title. After tearing up the division, with wins over Gezary Matuda at Polaris and other big names in her Sophmore black belt year, she’s on track for the grand slam and then some.

Further up the weight categories, we see Erin Herle make her return to competitive Jiu-Jitsu. After deciding to focus on her MMA career, she’s decided to put the Gi back on to challenge for her first world championship title.

In the first year where the IBJJF is actually offering cash prizes to this year’s champions, it’s even more on the line! So sit back and relax as we break down each black belt division and give our predictions on who’s going to be ended up on the top spot at the 2019 IBJJF World Championships. 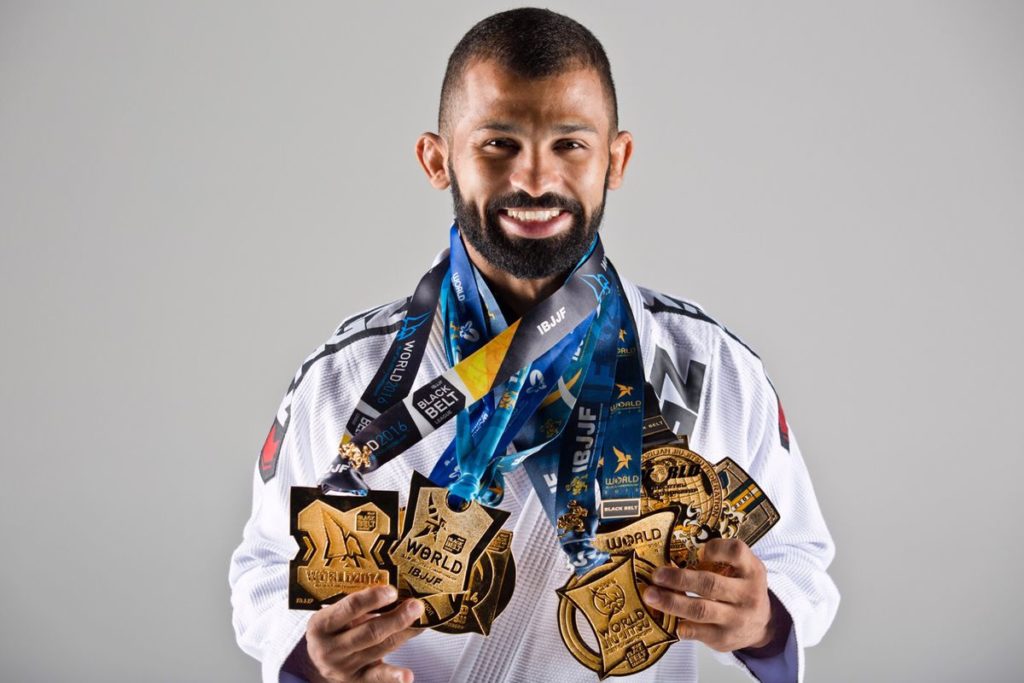 The male roosterweight division sees the return of the retired(???) Bruno Malfacine, looking for his 11th black belt world title. If he is successful he would cement himself as the most successful competitive black belt in the world with 11 division titles.

However, this year sees 2-time World Champion and 10-time NoGi World Champion Caio Terra back into the division. Also watch out for Tomoyuki Hashimoto, who placed third at last year’s competition.

The male light-featherweight division is an incredible 21 man division, so whoever wins this is going to need to put in some graft to get to finals days. As well as a stacked division, it also features some of the best black belts in the world.

Up first we have Michael Musumeci Jr looking break his own record by being the only American to win their division 3 consecutive years in a row. But the division looks formidable with the inclusion of both Miyao brothers Joao and Paulo, and João Gabriel Batista. 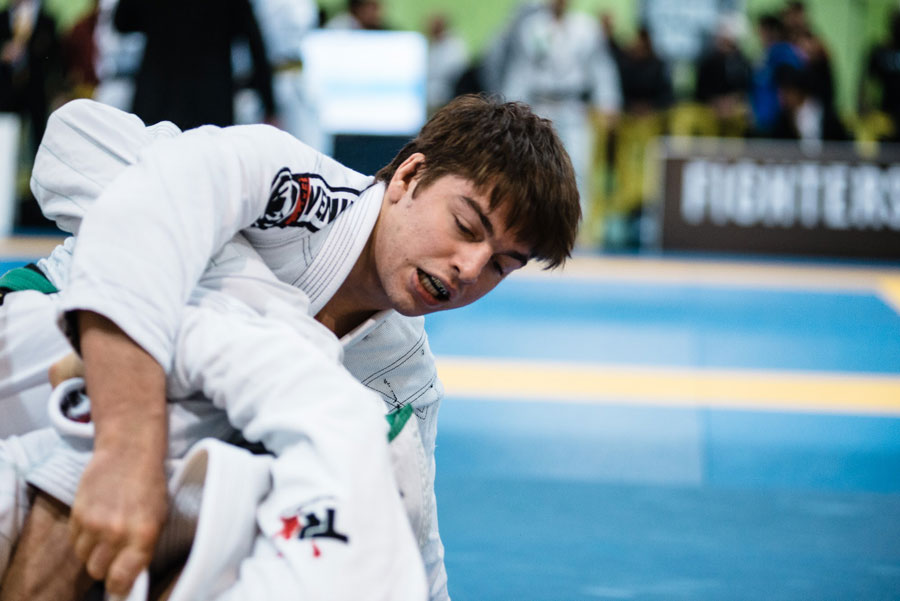 However the reigning featherweight champion Jamil Hill-Taylor is back to defend his crown and it’s going to be a tough ask.

The division features an incredible 32 competitors on the roster and features some of the biggest names in the sport. Lucas Lepri is looking to redeem his Europeans loss against the sophomore black belt, Aussie competitor, Levi Jones-Leary. Jones-Leary is looking to redeem himself after his Abu Dhabi World Pro performance after he was submitted by UK black belt Oliver Lovell. 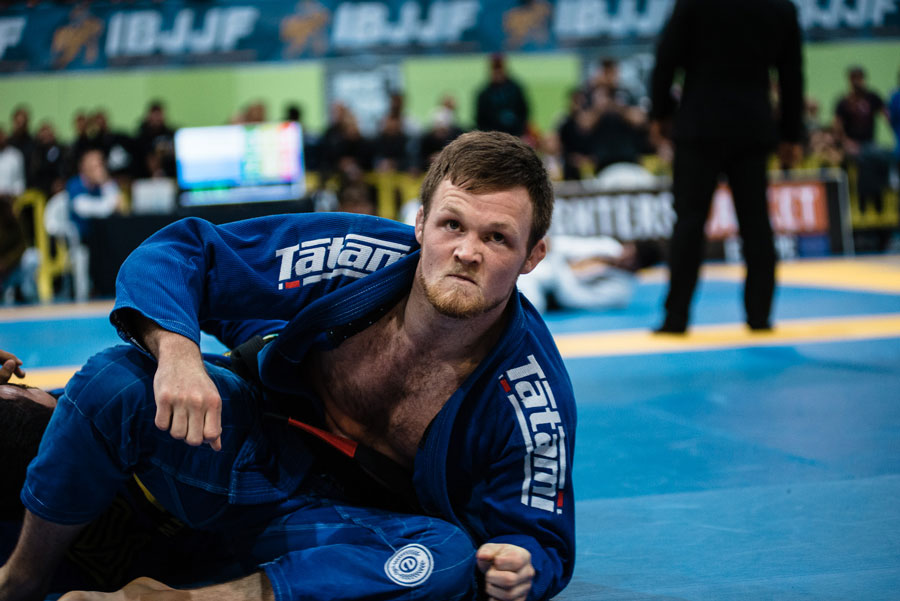 By far one of the toughest divisions in any knockout format the middleweight division normally sees some of the biggest stars brought to light. This year’s Worlds features a huge roster of former world champions, prospects and more in a division that looks to be absolutely thrilling.

First off we have the Norwegian Tommy Lanagaker who’s been grinding away the last few years to get his top spot on that podium, in 2018 he came to everyone’s attention when he submitted Erberth Santos and while the 2018 Worlds and 2019 Europeans saw him get to the finals but miss out in a tight match, he came back in incredible fashion at the 2019 Abu Dhabi World pro event. Will 2019 be the year for Langaker?

If it is to be his year then it’s likely he will have to go up against 2018 world champion and 2019 Europeans champion Isaque Bahiense. These two are starting to build an incredible rivalry, which we’re hoping to see once again at the 2019 worlds.

The medium-heavyweight division looks to be an all ATOS affair, with some of ATOS’ biggest names looking for glory. Unfortunately, we see this go the way of last year, with Lucas Barbosa and Gustavo Batista closing out the division.

We can only hope that Marcelo Garcia black belt Matheus Dinis or Unity competitor Devonte Johnson won’t rob us of a spectacular finale. 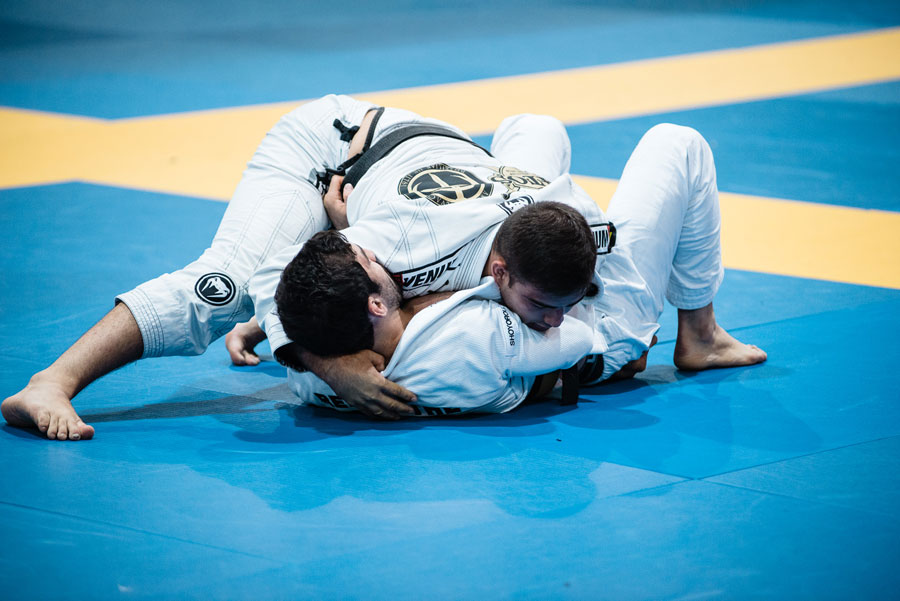 In another twist of fate, we see Keenan Cornelius enter into the heavyweight division under the BJJ Globetrotters banner, after his recent split with ATOS. Keenan was able to find the third spot on the podium after losing out to Patrick Gaudo last year, but can he do two better?

However, there is a legitimate challenger to the heavyweight throne in the name of Kaynan Duarte. Kaynan has been tearing it up throughout his first year at black belt and he has his eyes on the prize.

This is an incredibly stacked division, especially when the name Leandro Lo doesn’t feature much in the predictions, however after a year of being injured and poor competition performances in 2019, we’re unsure if Lo is able to conquer the top step this year in such a huge division.

But this division doesn’t just stop with these 4 black belts, ATOS’ Dom Bell is looking to make his mark, while Poland’s Adam Wardzinski is looking for his first IBJJF World Championship title.

Checkmat’s Jackson Sousa features in this division and he is always one to watch out for while Patrick Gaudo is back and looking for that final step up.

The heavyweight division features so many incredible names, it’s hard to predict who’s going to come out on top!

After dashing Leandro Lo’s hopes of being only the 2nd competitor to win 4 world championships in 4 different divisions, Team Lloyd Irvin’s Mahamed Aly is back to defend his 2018 title.

The male super-heavyweight division as always been dominated by a few select characters and this year we see Nicholas Meregali look to contend for the throne since the division doesn’t feature Lo.

When you talk about the male ultra-heavyweight division, there is only one person that stands out and that is Marcus ‘Buchecha’ Almeida.

In a title which was decided by referee’s decision last year, we’re looking ahead to an explosive rematch between Buchecha and Joao Gabriel Sousa.

On the female side of the competition, we look at the smallest (entrances and size wise) divisions. This division sees the return of Rikako Yuasa, who is looking to defend her 2018 title. It also features Italian Serena Gabrielli, who Yuasa beat in the 2018 finals.

Will we see a repeat of this exciting final in 2019? 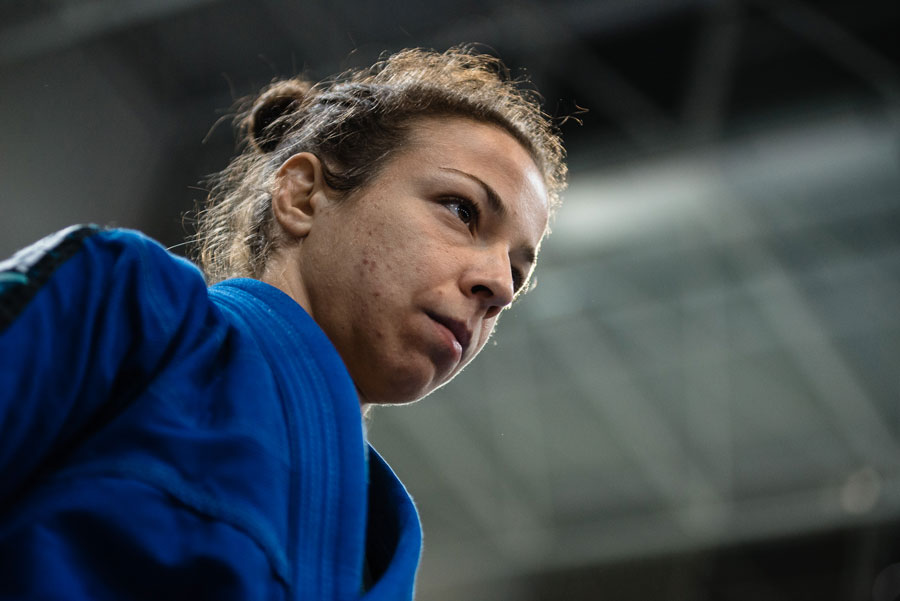 The female light-featherweight division features the return of Gezary Matuda, looking for her 4th world title. However, her title dreams were dashed last year after she was defeated by Amanda Monetrio, who went on to become the 2018 champion after defeating Talita Alencar in the finals.

Can redemption be found for Matuda or will this once again be Monetrio’s year?

All eyes are on one person in this division, Ffion Davies. In her first year at black belt she has become European Champion, won the Polaris female featherweight title, won the Abu Dhabi World pro and become the first British black belt champion at this year’s Brasileiros.

If Ffion manages to do the seemingly impossible, she would be the first ever female to win all major IBJJF championships in their first year at black belt and the first black belt to do it since Andre Galvao back 2005. All that’s left is ADCC… 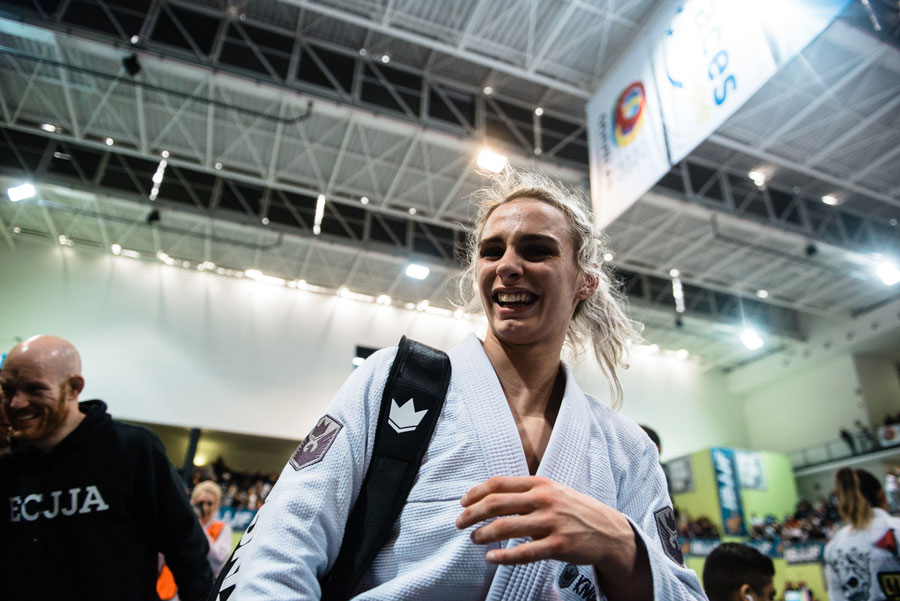 The division also features Checkmat’s Catherine Perret who is always one to watch out for. Last year she took 3rd in the championship, so can she do two better?

The female middleweight division sees returning champions battle it out to once again become world champion.

Keep an eye out for UK’s Samantha Cook, who became 2019 European champion. Can she go that extra mile to get on the top step?

Without the 2018 champion Claudia Doval featuring in the roster, the title race is wide open. Be on the lookout for last year’s podium placers Sábatha Laís and Andressa Mezari. 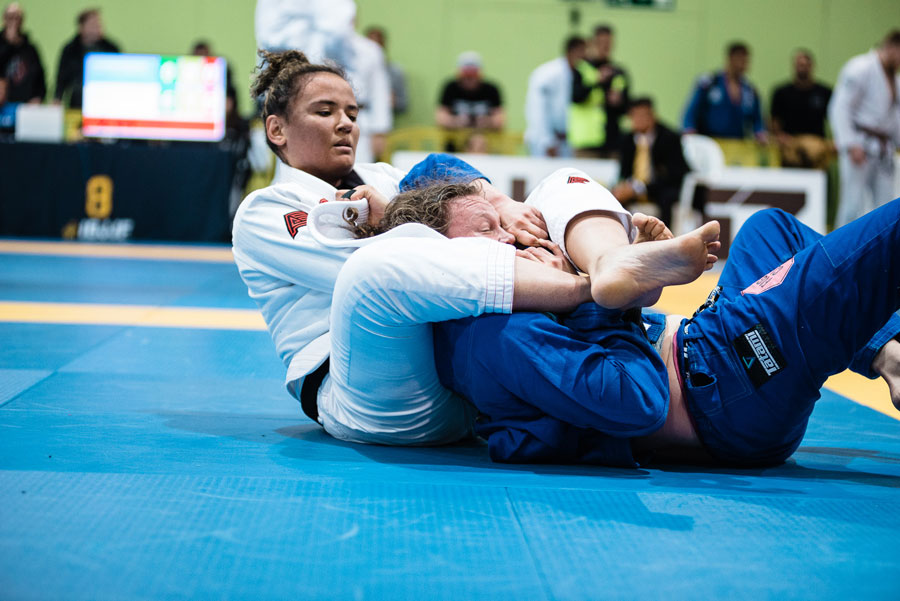 The higher end of the female divisions always seems to be dominated by the same few people.

In the heavyweight division that has generally been dominated by Nathiely de Jesus, and in a division of just 5, we’re struggling to see anyone who could top her in 2019.

With a doping suspension laid down on Tayane Porfirio, Jessica Flowers has moved up a division to claim the 2019 world title. However, a surprise entrance of Claudia Doval could see her challenge for this top spot, expect a surprise twist in this final division.