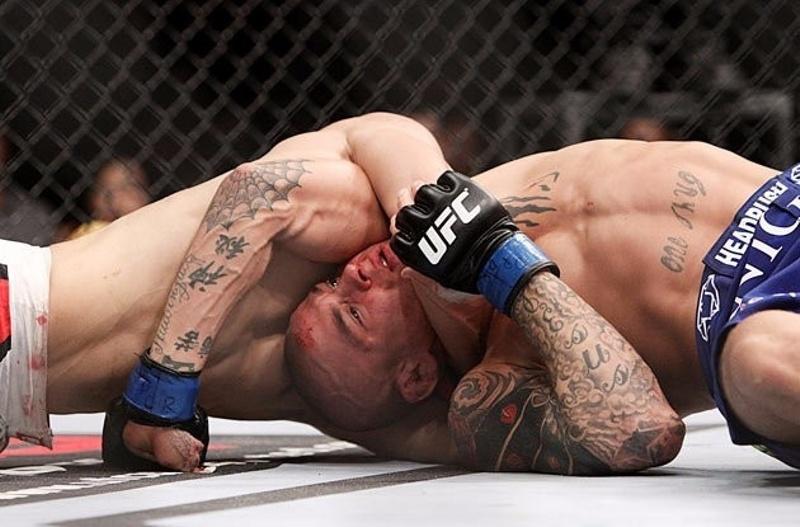 One of the things that make the Anaconda choke an effective submission is the fact that you can catch opponents off guard from different scenarios. It’s a common counter against someone who is insistent to catch your leg for a single or a double leg attempt. On top of that, you can also go for this submission from the top when you are doing a knee slice.

Origins of the Anaconda Choke

The origin of the Anaconda choke is unknown, however, it could be deduced from the position that it’s a variation of the arm triangle or Kata Gatame that originated from Judo. Similar to the arm triangle, it is considered as a blood choke. This choke can constrict the flow of blood to the brain and at the same time do vagal stimulation that can shut the brain off.

The Anaconda choke is also known as the Gator roll since it mimics the movement of a gator once it catches its prey.

How to do an Anaconda Choke?

A basic setup of the Anaconda choke is when the opponent is in the turtle position. You will usually end up in this position whenever you are trying to sprawl from a takedown attempt and your opponent is still looking for a leg or looking to pull guard.

Now, while your opponent is still in turtle position, usually, you want to continue sprawling trying to keep your hip out of the way. One good way to set this move is to let the opponent’s shoulder touch the mat and the arm extending towards your leg trying to still take you down. When this happens, you can get the arm from the side of the ear to wrap the opponent. Next, that same arm will hold the other arm’s bicep to mimic an arm triangle position.

From this position, you want your leg to hook your opponent’s leg. It means that you will have to crunch and walk towards your opponent’s hip. This makes the choke tighter as you use your core and compress the space on his neck.

A common reaction whenever you are dealing with an Anaconda choke is when your opponent posts the same side leg as the arm that you are trapping. This makes it difficult to roll the opponent and finish the Anaconda. A good reaction is to push the opponent on the side where his or her knee is down. It makes it easier to knock their hip to the mat. Once you do this, you can simply roll and finish.

Another common counter is when the opponent stops your leg from catching his or her legs. They usually try to grab on your leg with their hands creating space on the neck. What you can do to finish this position is to get your leg over the arm before resuming to catch the opponent’s leg.

The Anaconda choke is more commonly seen in No-Gi than in gi Jiu-Jitsu. The reason for this is the fact that gi gives you so much space because of the lapel. At times, this is already enough to keep the move loose.

Should you try it in gi? For most competitors, this move can take a lot of energy to finish when you have the gi. It is similar to doing guillotine when you are doing gi jiujitsu. But of course, there are other factors involved such as your body type. Are you lanky? Someone who is lanky can have an easier time to wrap their arms around the opponent’s neck.

Tips on How to Increase your Finish Rate

Getting the Anaconda choke will require a good squeeze. Though good arm strength can help your squeeze, Anaconda choke isn’t solely a muscle move. Relying only on your arms can backfire especially when dealing with someone who is spazzy or someone who tends to have good cardio.

Just like any other type of triangle attack with one arm trapped and one arm is free, it is important to keep the space between the shoulder and the neck to a minimum. You can do this by keeping the arm extended and across. A usual counter by a lot of strong individuals is to try and create space by putting their elbow out. To increase your success rate using the Anaconda, you want to use your legs at play, or sometimes even your elbow can tuck your opponent’s elbow in.

And lastly, you can combine your different attacks whenever you are trying to go for an Anaconda choke. You can use it together with your Brabo choke. By drilling both, you can weave your arm whether from your opponent’s armpit or going from the head mixing both Brabo and Anaconda to increase the chances of finishing the opponent.

Apart from using Brabo and Anaconda, you can also use an arm-in guillotine to make it a three-way attack that can confuse your opponent.