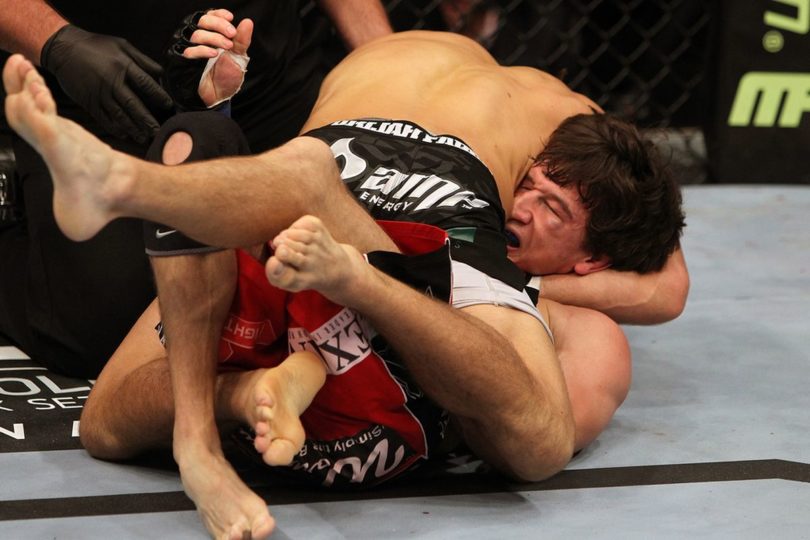 The guillotine is a common move done in MMA and No-Gi tournaments. Guillotine may look fairly simple, but this choke has a lot of intricacies to it. The guillotine choke can be a blood choke or an airway choke that can get instant results. In some instances, there are angles when this choke works both ways.

Guillotine has been popularized by grapplers such as Marcelo Garcia. What makes this move a high percentage? And what are the most common mistakes done by grapplers whenever they are trying to apply the guillotine choke?

How to Properly Execute a Guillotine Choke

The choking hand must leave no space between the neck of your opponent and your torso. Next, it is also crucial to ensure that the bicep is going to block the carotid while the radial bonce will go against the opponent’s throat.

How to Increase the Chances of Finishing the Guillotine Choke

One common mistake when it comes to doing guillotine choke is when you simply rely on your arms. This means that if you are competing against someone resisting the choke, chances are you are going to burn your arms fast. In an MMA fight, this can spell disaster and could leave you vulnerable to counters especially when you also have to worry about punches.

When it comes to making your guillotine chokes deep and efficient, it is important to use your lower limbs as leverage. You will be using not only your legs but even your lower back and glutes as well. And this applies in different positions.

During standing guillotine, for example, you will have to tiptoe and shrug to add leverage when it comes to squeezing the guillotine. It means that you are going to use other body parts to increase the pressure on your opponent’s neck.

As for the subtle movement of your arm, you want to get your bicep close to your torso while the clasping hand lifts the choking hand.

Guillotine Choke from The Mount

From full mount, it is possible to hit a guillotine choke. This is possible especially when your opponent is trying to catch you back on half guard by doing an elbow-knee escape. Once he or she is concerned about putting your leg back on half guard, you can counter by wrapping your arm around the neck. Finishing the guillotine choke from this position is fairly simple as you need to get your hip down to the mat and squeeze the neck.

Setting up the Guillotine as a Takedown Counter

Guillotine is most likely available when you try to defend a takedown. Once you sprawled and stuffed the takedown, having one bicep in front of the shoulder is an opportunity to catch someone with a guillotine.

It is a good idea to get to a closed guard once you stuffed the takedown. Once on full guard, it helps maximize the cranking ability of your guillotine choke. Next, you have to make sure that you won’t be seeing your opponent’s ear, or else the choke is loose. Be sure that the bicep is close in contact with your opponent’s neck. You can now squeeze your closed guard and extend while squeezing your choke.

The good thing about chokes is that it can be used as a distraction that can help you improve your position. For instance, you can sink in a guillotine choke and sweep an opponent once he or she started defending using both hands. This is a common setup, especially from the butterfly guard. You can catch the neck and go straight to a butterfly sweep once they start defending.

From here, you have better leverage to finish the choke especially when you end up on full mount position.

Though guillotine can be used from different positions either to choke an opponent or to initiate a sweep, keep in mind that it can also backfire. There are some grapplers and even pro MMA fighters who tend to still squeeze the guillotine choke even underside mount. This can spell disaster for the one doing a guillotine. Not only are you going to waste energy instead of improving your position, but you can also get choked when someone does a tight crossface.

A Common Submission in Nogi

Finding the guillotine choke in gi isn’t exactly off the table. However, the foam on the collar might pose a problem. This can make the choke loose since it creates space between the neck and your torso. However, there are still instances when the gi gets untangled and you have the chance to finish a guillotine choke. If not, you can always use the gi and use the same principles of a guillotine choke but with a loop choke.

Counter to the Guillotine

There are different ways on how you can counter the guillotine. One, you simply have to actively grip fight and make sure that the opponent doesn’t clasp the hands. Also, you want to make sure that the choke doesn’t find its way on your throat which could finish the choke quick.

Other methods include cupping the back and jumping to your opponent when someone does a standing guillotine on you. However, considering all factors, this kind of counter won’t always find its way to work.