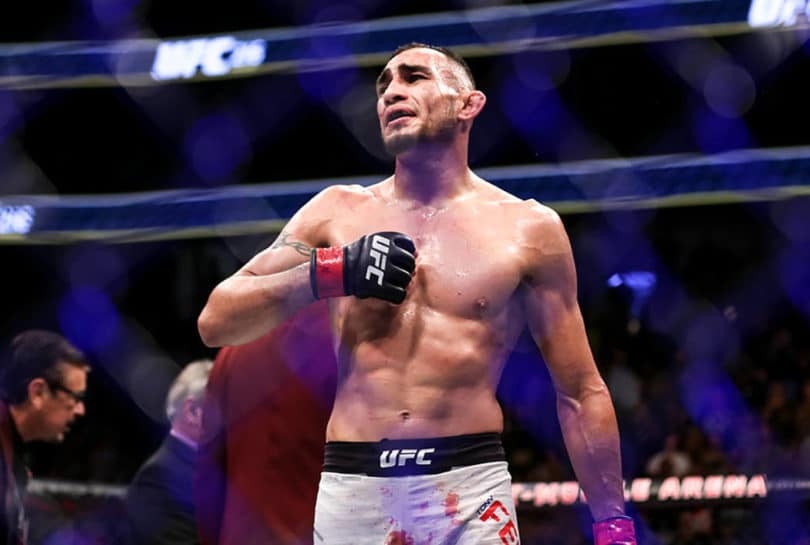 So last week Tony Ferguson’s wife filed a restraining order on the UFC fighter due to some mental episodes he had been recently experiencing, however after looking into it, we were surprised by how the deep the rabbit hole actually goes.

It turns out that the former UFC Lightweight champion has had numerous mental episodes, which we will go into detail below. Please note that this restraining order is not due to any assault.

A Timeline of Tony Ferguson Events

Tony’s wife Cristina wrote that the UFC fighter did not sleep that night and he believed that there would be a great flood which was a result of the lunar eclipse that night.

Ferguson apparently purchased a life raft and took his wife Cristina and their son on a long drive inland, all the way to Palm Desert, California, which is about 111 miles from their home in Santa Ana.

Tony’s wife wrote that he woke herself and their son up in the middle of the night there and demanded that they needed to leave because they weren’t safe. After this incident, Tony promised that if there was no flood that he would seek medical help with his mental issues, but he later refused.

Tony had what Cristina described as a “psychotic break or a panic attack.” He screamed in her face, swearing at her and believed she was someone else, she wrote.

“I woke up late that night to Tony standing over me accusing me of being a witch,” Cristina wrote.

The UFC fighter’s wife, Cristina, wrote that Tony unplugged their refrigerator and turned off half the power in their home.

On Feb 19th Tony Ferguson allegedly agreed to be taken for psychological help at Keck Medical Center at USC.

His wife Cristina and her father went to pick him up. When they arrived, they saw that the home furniture and walls had been destroyed. The mantelpiece was ripped off the wall.

Cristina said that Tony believed that there was a hidden doorway under the fireplace. Santa Ana police were apparently called that day. This was also around when she moved into her parents’ home, she recalls.

Cristina says that when she picked her husband Tony up to take him once again to Keck Medical Center.

While they were driving there, they hit traffic on the 405 freeway in Los Angeles. While the car was moving, Cristina describes how Tony jumped out, onto the freeway.

He then ran away, jumped over a fence and disappeared. He apparently did make it back to their family residence later.

These were described by Cristina saying that Tony was drinking heavily and displayed “manic behaviour.” Tony’s wife added that she believed things began to get worse when Tony injured his knee in April 2018 and needed incredibly extensive surgery.

That injury forced him out of a UFC 223 title fight with Khabib Nurmagomedov.

“There are many frightening incidents which I have yet to list in this declaration,” Cristina said. “However, I have videos and photographs of Tony’s frightening, irrational and paranoid behaviour, which depicts crying, laughing, muttering, yelling, etc., for no apparent rational reason.”

After winning the Ultimate Fighter in 2011, Cristina said that Tony had a “mental break”. The TUF champion flew home to visit his parents in Michigan and was apparently removed from the flight because of an alleged outburst.

Cristina wrote that Tony went to the hospital in Michigan and he was prescribed Risperidone, a medication which can be used to treat schizophrenia and bipolar disorder.

Tony and Cristina were happily married in 2012 and she said that things did get better until 2017 when his “unstable behaviour once again began to surface.” At that time, she detailed that, he was also drinking heavily.

There was a time when Tony vowed to protect her and their son, but Cristina said that he has begun to think she was evil and would not let her shower or be in the bathroom alone.

“Tony’s behaviour is getting worse and more frightening,” Cristina says. “I am afraid that during one of his episodes he will kill me, our son and, or himself.”

On The Road To Recovery

It seems that Tony’s restraining order has finally set him on the path to help. He recently came out on social media saying that he had been to receive psychiatric help and that his most recent appointment was “a success.”

However it looks like Tony won’t be back in the octagon for a while, in a recent interview with Dana White, he said that Tony needs to look after himself first before stepping back into the cage.

“Tony had hit me up after the Max Holloway fight went to Poirier and was saying, ‘What’s next for me?’” White said. “I said, ‘Well, we can get you a fight with Al Iaquinta.’ Reached out to Al, Al was interested in the fight. But the reality is that right now Tony has a lot of personal problems that he needs to deal with. I don’t think that putting him in a fight right now would be in his best interest. He needs to handle his personal stuff first.”

We wish all the best to Tony and his family and we hope to see him back in the Octagon soon.