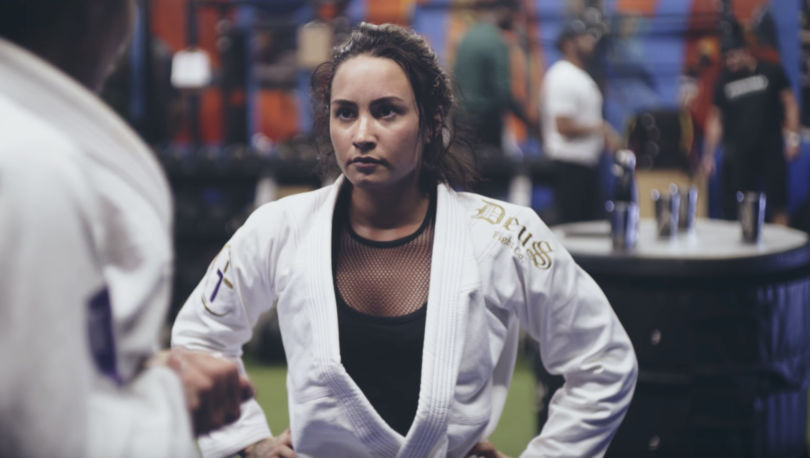 Pop diva Demi Lovato has had a rough 2018, after almost dying after a heroin overdose. However, Jiu-Jitsu was always there for her, even after her downfall.

The pop star originally started training in 2017 under ADCC champion Orlando Sanchez. For a time he travelled with her, teaching her several times a week. Sanchez was also the first person to award the first stripe on her white belt, beginning the journey into this wonderful sport.

“When I met her, I had no f***ing idea who Demi Lovato was,” said Sanchez, in an interview with Jiu-Jitsu Times. “We helped each other a lot over the year because of our similar hearts. She is the most loving, humble, caring person you could ever meet. She’s just another person who puts on her gi and ties her belt like all of us.”

Unfortunately, due to commitment issues, Sanchez was unable to continue training Lovato, and that is when she moved to her new coach, Chris Light, where she also trained with Tarsis Humphreys, BJJ black belt under Alliance head coach Fábio Gurgel.

“She trains almost every day during the week for at least two hours,” says Humphreys. “Most people train one hour a day three times a week, but she’s intense. She does Muay Thai, boxing, cardio, functional training – a lot! She trains MMA sometimes with professional fighters, but I don’t believe she competes. MMA is tough.”

After just a year Lovato received her blue belt, which came without its criticism from the community, but former coach Orland Sanchez backed up his former student. “Understand she can afford private lessons every day with badass black belts year-round. She’s trained with me, Danielle Martin, Tarsis Humphries, Randy Couture, and Chuck Liddell. She trains three to four days a week sometimes. So trust me, Demi is a legit badass who works harder than anyone I’ve ever seen.”

Demi Lovato has been open to the public about her mental illness, something we should all commend her for and admitted to starting Brazilian Jiu-Jitsu to help her cope with that. Unfortunately, in 2018, she was found in her hotel room and had overdosed on Heroin and Fentynol. After a long stint in rehab, one of the first things Lovato did was put the gi back on.

“Sweaty, messy jiu jitsu hair.. #BJJ #bluebelt #nevergiveup,” she said on an Instagram post in November, where she was sporting a crisp white gi and the blue belt she earned in August of that year.

But it wasn’t until recently that Lovato levelled up that blue belt, a few days ago she posted on her Instagram Stories that she just earned her second stripe.

“2nd degree blue belt!!!!” Lovato wrote on her story, along with a photo of her new stripe.

“This means the world to me and I couldn’t be happier,” she added in another photo. “Brazilian jiu jitsu is a passion of mine and I can’t wait to learn more and more.”

Lovato also thanked her instructor, Chris Light, who gave her a sweet note about her promotion that read: “Earned. Not given.”

“Thank you @1chrislight for teaching me so much,” she said. “I can’t believe how far I’ve come since working together. You’re a legend!!”

In a sport that struggles to find females to join, this can hopefully be a shining beacon for women to begin training this sport. “She’s been nothing but positive for us, shining light and inspiring young women to train,” says Orlando Sanchez. “Demi is capable of reaching millions of young girls and women alike, and she’s been nothing but positive for our community. You people talking shit are the ones who don’t belong in a gi.”