Like Hayabusa, Venum is arguably one of the top of MMA companies out there at this moment. They have great big, sprawling ranges of products including literally every type of training gear you can think of. They’ll release an amazing, top-selling glove and then rather than rest on their laurels and get complacent, they’ll take that glove and improve it. They’ll analyse where it’s good, where it’s bad, where it can slightly be improved, why it sold so well in the first place, etc. and they’ll release it as an improved version that it’s even better than before!

They take this same relentless drive to iterate and improve and use it on everything they make. Venum started out as primarily a MMA company but have since moved into avenues as well to completely corner the combat sports market. One such combat sport that they’ve had a lot of success with is BJJ. They have a huge range of Brazilian jiu-jitsu gi’s as well as selling their own belts too. They even sell an actual range of gi’s for women and another range for kids. Normally, companies will only release a token pink gi for female or some cheap gi for kids just to jump on the bandwagon. But Venum aren’t satisfied with that and they’re not a company known for half measures. Everything they make and release is of the highest value; no corners cut and no short-cuts taken. 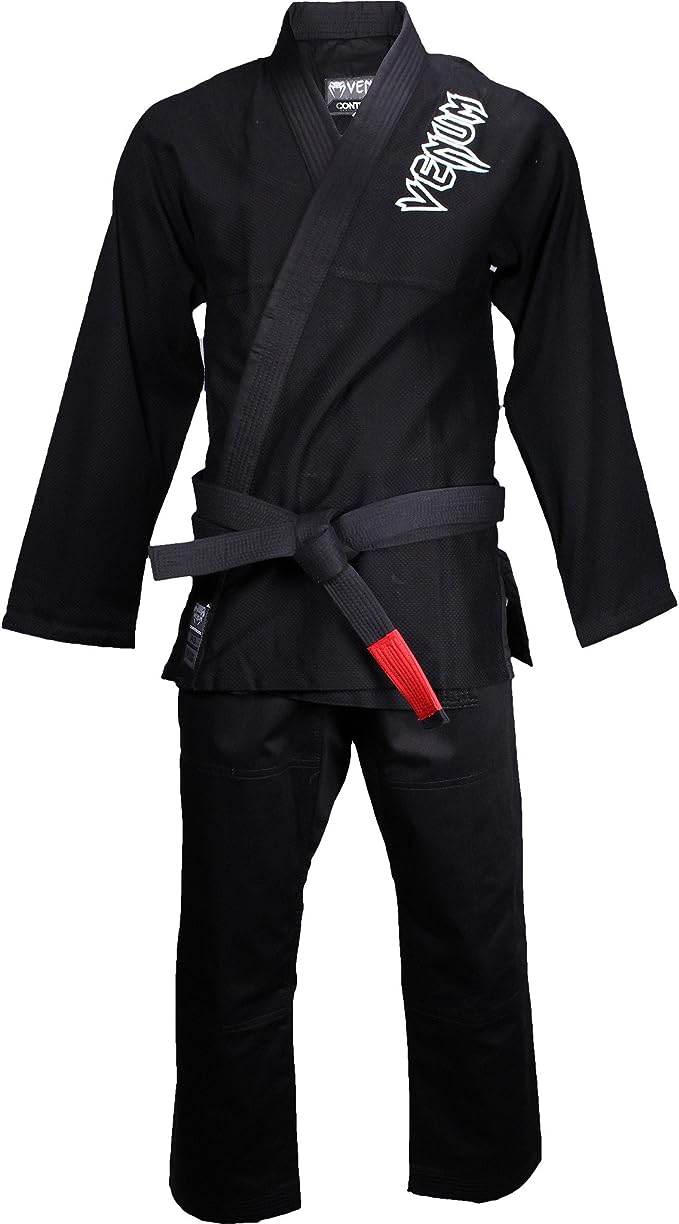 This is Venum’s standard entry-level gi, available in the usual white, blue and black and available in many sizes from A0 up to A4. They also offer half-sizes in between the major sizes. This is actually quite uncommon though it’s such a good idea; each standard gi size has such a large amount of wiggle room and a large variety of people to meet the needs of that is can be difficult to actually get a gi that fits you properly. Venum including half-sizes is a great way to combat this problem and to ensure that you get a gi that suits your needs perfectly.

The gi is generally a blank canvas style with the main venum logo sitting on the upper chest next to the left lapel. The rest of the gi is free for you to customise to your own ends. Though the gi still looks incredibly sleek and stylish without any additional adornments. The lack of logos and stylistic elements also give this gi a fresh and crisp look to it that many gi’s just don’t have these days. If you prefer a more traditional aesthetic, the Venum contender is for you.

Venum sponsor a ton of top athletes in MMA, BJJ and other sports too. You can see that BJJ legend Robert Drysdale models this gi and uses it in his daily practice. If someone of Robert Drysdale’s calibre decides to use a gi, then you know for certain that that gi means serious business. Like with a lot of their gear, Venum like to take a winning product and improve it even further. The Venum Contender 1.0 was so popular and so widely well-received that they decided to both keep the 1.0 in production at a lower price whilst also releasing a 2.0 model for those that want an improved experience on the former.

The Contender 2.0 is similar to the Contender 1.0 in appearance except for a tapered, custom fit that’s more common with competition style gi’s. You can expect slightly tighter cuffs, less material around the waist and just generally less opportunity for your opponent to grip you. The same traditional, streamlined look of the Contender 1.0 but a lighter, tighter, improved fit.

There are also two additional style options that were not present on the original but that are available for the 2.0. You have the white, standard blue and black that is common as well as a darker navy blue and even a grey model that looks incredible. In fact, grey gi’s look so good and so well sought after that they’re quickly becoming the unofficial fourth colour offered when buying gi’s.

The Contender 2.0 is lighter than the 1.0 with a 350 GSM pearl weave jacket that allows you to stay cooler when training hard. The jacket is rounded with reinforced slots to both stop certain parts of the jacket from too much strain and reinforcing them to prevent tears if they do end up bearing the burden. The EVA foam soft collar is also a great addition as these kinds of collar keep their shapes much better when washing than some other gi’s do. The Venum Challenger 4.0 is Venum’s flagship top of the range gi. Whilst Venum offers a ton of higher-end gi’s, they are often with more garish and experimental styles and colours. If you want a great high-end gi but without going crazy with the aesthetics, then the Challenger 4.0 is the perfect gi for you.

The jacket is 450 GSM pearl weave cotton with rounded, reinforced slots. The rounded jacket allows for the jacket to both be more comfortable and to prevent wear-and-tear along the shoulders and the arms/armpits. This also allows the jacket to sit better along your shoulders and keep its shape, even after many washes. Pearl weave is the most commonly used weave in the premium range of gi’s as it’s very strong whilst still remaining light and agile so that it doesn’t weigh you down. Pearl weave basically strike the best possible balance between comfort, weight and strength.

It features an EVA foam collar which both make it more difficult for your opponent to get a grip on your lapels and helps the collar keep its shape when being grabbed and when being washed. This is incredibly important as the jacket can lose all of it’s shape and integrity if the collar becomes damaged or warped.