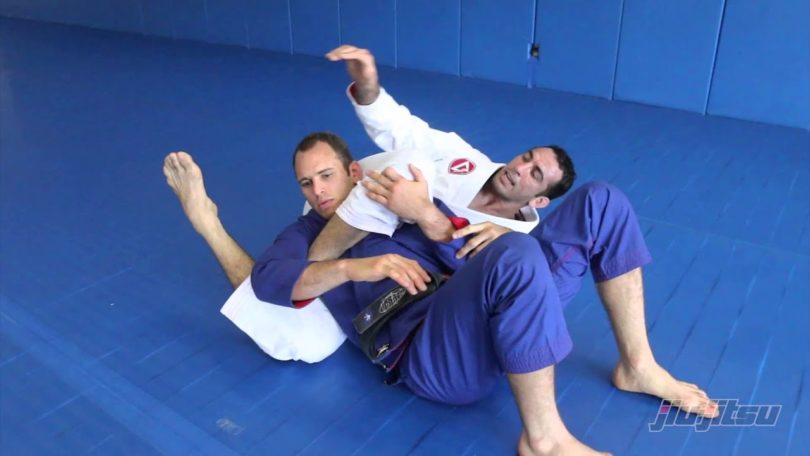 A triangle is arranging our limbs in a figure-four configuration around our opponent. This is can be accomplished with our legs or arms and can target many regions on our opponent. We’ll simplify by focusing on leg triangles wherein we entangle our opponent’s head and arm to strangle them. Yet it’s not quite so simple. First, there are five of these techniques, all requiring different tactical approaches and each with multiple entries. Second, submission-grappling nomenclature is chaos. We’ll address point one with perseverance. We’ll address point two by using Braulio Estima’s nomenclature, since his teaching proficiency and authority on triangles are both well-established.

Something to keep in mind: For effective triangle-based strangles, one of our appendages directly compresses one of our opponent’s arteries, but we must use our opponent’s trapped arm to compress the other. If something goes awry, this latter detail is usually where it happens. Understanding this will assist your troubleshooting. Finally, for all triangles described below, exchange “left” for “right” when attacking a triangle from the opposite direction.

Standard by convention, this is the triangle most beginners are taught and usually from the guard. If you are on your back looking at your opponent, then the standard triangle will look like this: Your opponent’s head and (stage) right arm are caught between your legs. Your right thigh is against their neck, your knee bent with your calf across the back of their neck.

Depending on your leg length, the knee or calf of your left leg locks over the lowest part of your right shin, just above your foot. (It may be tempting, or for people with shorter legs only possible, to lock your knee over your foot. This can work but can also injure you, turning your triangle into a toehold on yourself.) Turn perpendicular to your opponent. You should be looking into your opponent’s left ear. Scoop their left (non-trapped) arm or, if possible, their left leg at the knee. This will discourage them from posturing in defense.

In creating this angle, keep the lock tight but lose just the shoulder of your opponent’s arm from your triangle. (This latter detail holds for all triangles in this discussion.) Keep your legs parallel to each other. Press with your right leg, pull with your left leg, and generally compress everything, aiming to make the space wherein your opponent resides as small as possible.

This is a “reversal” of the standard triangle, in that you are locking your legs on the opposite side. Keeping your opponent’s head and right arm between your legs, you instead bring your left leg across their shoulders and lock your right knee over your lower left shin. Your left thigh will be in your opponent’s right armpit and your lock will be on the side of their head. This initial lock will afford a great deal of control and opens up sweeps and attacks on both your opponent’s arms.

However, for it to be a successful strangle you will need to modify the position, and you will likely need to open the lock to do so. Drop your left knee to the floor, such that your left calf is now in their armpit, replacing your thigh. Raise your hips high, inverting onto your shoulders (not your neck!) to lock your right leg over the lowest part of your left shin. Once again, keep your legs parallel and compress everything. Finishing this strangle may be challenging at first, but once you get a feel for the angle and proper mechanics, it is a surprisingly powerful finish.

For this triangle, you will finish facing the back of your opponent’s head (hence, “rear” triangle). Staying consistent: You captured your opponent’s head and right arm—but this time you are behind them. Ensure your left calf covers the left side of their neck with your left foot poking out from under their right armpit. (Do not over rotate, making your calf parallel to their shoulders. You will lose the angle to strangle efficiently.) Your right knee will lock over your left lower shin. Grabbing at their elbow and wrist, pull your opponent’s right arm toward your chest. Bring your knees together, driving your right knee into their right deltoid and compressing everything. Again, your opponent’s neck and arm reside in the shape you’ve made with your legs. Make that shape as small as possible.

The above three triangles are related, in that you can move from one to the other without any major reorganization of your body relative to your opponent’s. The following two triangles are related to each other similarly. However, moving between any of the above three to either of the following two will require an almost complete change of position.

Though often mistakenly referred to as the regular inverted triangle (above), the reverse inverted triangle is the triangle in which Braulio Estima caught Andre Galvao in their iconic 2009 ADCC match. Capturing your opponent’s head and right arm, your left thigh will connect to their neck and your left calf will lay across their neck. Your right leg will shoot under their armpit and lock over the lower shin of your left leg. Again, you may feel “upside down” but in this case your opponent may feel a bit behind you.