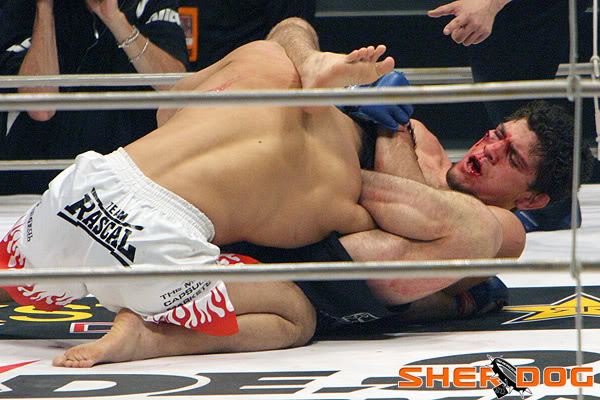 The popularity of Eddie Bravo’s brand of jiu jitsu especially after beating Royler Gracie in ADCC catapulted the 10th Planet to new heights. Along with the popularity of 10th Planet Jiu Jitsu came the emergence of rubber guard series attacks. Rubber guard is a high guard that has been used by a lot of MMA fighters to control the opponent’s posture. Mostly nogi based, submissions taught by 10th Planet were more based over hooks, under hooks, and heavily reliant on flexibility.

The gogoplata is one of those attacks that comes from the rubber guard. The gogoplata is a choke done using the shin bone placed right in front of the opponent’s throat, unlike blood chokes such as triangles or even a guillotine, the gogoplata is solely a choke delivered directly to the windpipe. This is also the reason why it is a quick submission.

Origins of the Gogoplata

The gogoplata isn’t exactly something new that was just discovered by Eddie Bravo and other guys from 10th Planet. The gogoplata has already been mentioned in old judo books. The first mention of the gogoplata was in the book by Mikonosuke Kawaishi’s My Method of Judo which is a book published in 1955.

It is rare to see fights in mixed martial arts or in jiujitsu tournaments end with a gogoplata. There are a lot of factors involved such as getting the opponent to commit in pushing forward and controlling the posture. However, there were notable fights that ended with a gogoplata.

You have the likes of Nick Diaz when he fought Takanori Gomi in Pride or when Shinya Aoki finished his fight in Dream with a gogoplata from the top which is also dubbed as Aokiplata. But the first time when the gogoplata was used was when Elvis Sinosic fought against Kiyoshi Tamura at Cage Combat Australia in 1997.

Now, even in WWE, the Undertaker has been using this move. The gogoplata was renamed as Hell’s Gate and it made its debut on Smackdown in 2008.

Many consider the gogoplata as a low-percentage move considering that the submission requires a certain amount of flexibility. However, there are certain adjustments that you can do in case you are not too flexible to get your legs all the way up on your opponent’s shoulder.

The most common setup of the Gogoplata comes from a closed guard. However, this move is something that you can only do if the opponent’s posture is down. Therefore, you need to find a way to break the posture. You want to use your legs and break the grips to be able to get the opponent’s posture down. Sometimes, you can go directly to rubber guard if your opponent is trying to stall.

If you are flexible, once you break the opponent’s posture, you can get your legs up to do a rubber guard. Rubber guard requires switching the grips on the shins to ensure that there is always weight forcing the opponent down. Once you have an opportunity, you can get your shin right in front of your opponent. This will threaten the choke on your opponent. But while you are still maintaining a grip on the top shin, it means that the opponent has a difficult time posturing up. You can then switch your grips to have both hands to control the head. This will get the opponent’s neck to feel the pressure coming from your shin. Some details can get the gogoplata to become tighter. For instance, once you have two hands on your opponent’s head, you can now get your top leg to transfer and kick the heel of the choking leg. This will add pressure upward choking the opponent further.

So what if you aren’t that flexible? From a closed guard, you still need to break the opponent’s posture. However, unlike the rubber guard where you get your legs on top of the opponent’s shoulder, what you can do instead is to scoot out. You can also over hook the arm and pinch the shoulder using your knee. This will get the shoulder of your opponent exposed so you can go and threaten an omoplata. But instead of sitting and locking your legs in a triangle, you will only get the leg over the shoulder. Now, since you are on the side, you can creep your shin to your opponent’s neck. Your hands can focus on your opponent’s head and you have to center back to be able to sink the choke. You can even finish the gogoplata by grabbing the big toe.

The Aokiplata popularized by Shinya Aoki is a gogoplata done on top position. To be able to hit this move, you can do a high mount. Now, you also want to switch to S-mount controlling the shoulder of your opponent. It is a good idea to mix your attacks to be able to catch your opponent with your gogoplata.

There is a window of opportunity to catch opponents with a gogoplata if you attempt an armbar from S-mount. You can expect the opponent to hold their arm. What you can do is to switch and get the leg nearest to the head of your opponent and turn it as your choking leg. You can then get the shin on top of the neck and simply base out on your head. This will put all your pressure on the neck of your opponent causing him or her to tap.

Common Challenges When Pulling off a Gogoplata

There are instances when it is difficult to get your shin directly on your opponent’s neck. An effective way to block the gogoplata is to simply tuck the chin. On top of that, you also have to anticipate the person inside the closed guard to posture up. Therefore, if you are going to use it against a bigger opponent, hitting the gogoplata can be quite difficult.

To increase the chances of hitting the gogoplata, going for the gogoplata from the mount is a better starting position. Here, you can even roll to guard in case you want to control the head. And of course, you want to keep your opponent busy whenever he is defending the gogoplata. You want to attack different sweeps and submissions to be able to hit a gogoplata.