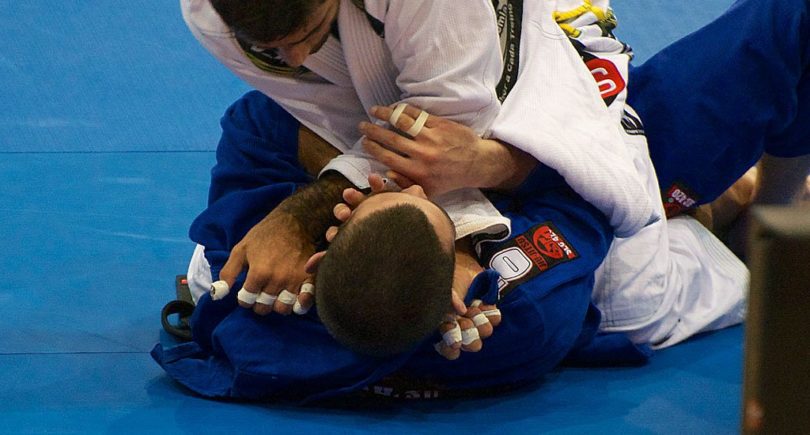 Learning basic jiujitsu fundamentals is a must for every practitioner. One of the simplest chokes that should be taught from white belt to advanced belts is the cross collar choke. Cross collar choke can come from different positions. Its mechanics are simple but a lot of practitioners even higher belts shy away from this technique thinking that it requires a lot of strength to finish the move.

Roger Gracie is among the competitors who managed to showcase the power of cross chokes even in the highest level of competition. He was able to finish a lot of opponents from the full mount with his cross collar choke.

Understanding the Mechanics of the Choke

The cross collar choke, regardless of the position, constricts the blood supply to the head. It makes use of radial bone and ulna to get the choke. But apart from constricting the blood to supply the brain, it can also stimulate the vagal nerve which means that it can slow down the heart creating a double whammy effect of decreasing the supply of oxygen to the head. This is why a lot some don’t even have the chance to tap out when they get caught in a cross collar choke.

Setting up the Cross Collar Choke from Closed Guard

To set up the cross collar choke from closed guard, it is important that the opponent’s posture is broken. Breaking the posture also requires that you will actively fight for the grips to prevent the opponent from posting up and regaining an upright posture from the closed guard.

It is important that the first grip happens to be tight. The first grip is going to be four fingers inside the collar. As a marker, the thumb should be at the back of the opponent’s head. This way, the radial bone will be in contact with your opponent’s neck.

Getting the second grip is not really as simple as it seems. There are also different variations on how to finish the cross collar choke. A basic way to finish it is by taking your other hand, palm down, and grabbing the material somewhere around his shoulder to finish.

However, let’s admit that there are instances when your opponent will choose to close the neck. To address this problem, you can “shave” your opponent to get the opponent to look the other way. Instead of just grabbing the material to secure the cross collar choke, you can bump the head using your elbow and then shave all the way to your wrist nudging the head the other way. Once you feel that the head moved a bit, that’s when you can grab the top part of the gi.

There are also other variations to the second grip of cross collar choke. Instead of doing palm down, you can do four fingers inside the collar as well. You can grab the collar and sneak it under your first choking hand.

Regardless of your choice, once you have the right grips, you will have to prevent the opponent from regaining his or her posture. You need to use your legs to bring the opponent’s posture down. Some want to squeeze their knees to have more control of the opponent’s hip while others simply bump using their heel while in a closed guard. Regardless, you want to make sure that your opponent isn’t going to straighten your hands by posturing up.

You also don’t want to open your elbows out whenever you are finishing the cross collar choke. By keeping your elbow together, you are also keeping the radial bone and the ulna close to the opponent’s neck.

Cross Collar Choke From the Mount

He sets things up by first being heavy on the opponent’s hip. Next, he wants both hands based out preventing the opponent to do a reversal. Next, he will choose one side to sink his first grip. But before he does that, he tries to get his head towards that side. The reason for this is to become heavy enough on one side that you can remove one grip without getting reversed. Once you have the first grip with four fingers in the collar, the next goal is to get the second grip without going to closed guard.

Roger Gracie moves his hand from one side and inches it like a clock all the way to the other side. The entire time he is maximizing the span of his free arm. Once he reaches the other side, he then replaces the posting hand with his head.

Another great setup for the cross collar choke is when you do a knee slice. It’s common for opponents to squeeze your leg to prevent the pass. And also, your opponent is most likely going to face you on his or her side. Once they turn to their side, you can get the first choking hand. The second choke becomes easy when they try to fight the knee slice. However, if you are insistent on finishing, you can also shave and squeeze. But to get a better finish, you will have to kneel on your posting leg and crunch.

Some use this as a distraction to get to a better position. It is possible to get the opponent to defend that they forget about the leg that they are trapping. It is also possible to not only pass but to even go straight to mount and still finish the cross choke from this position.

The cross collar choke is a basic but highly effective submission. Though it has intricate details, it is a high percentage move that you can use in different situations.