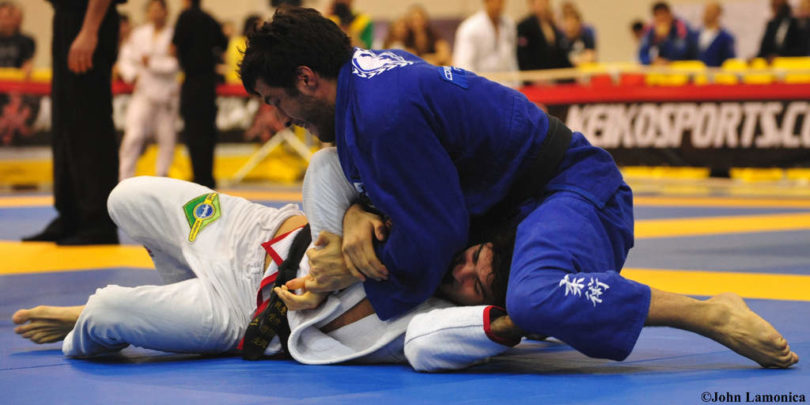 What’s a Brabo? Why is a Kimura called that? When you start BJJ you hear a lot of fancy names for positions and moves that you just repeat the name of but have no real knowing of why they’re called that.

We’ll teach  you through the history of why some of your favourite moves are named like they are.

The Kimura was named after the judoka Masahiko Kimura, who used it to defeat one of the founders of Brazilian jiu-jitsu, the late, great Hélio Gracie.

Fun Fact! Because an Americana is basically a reverse Kimura, in UFC fights, Bruce Buffer still announces fights won by Americana as “by tap-out due to a Kimura”

The De La Riva hook started being developed in the early 1980s by a Jiu Jitsu practitioner named Ricardo De La Riva. Ricardo trained at the Carlson Gracie Academy, a gym notorious for having the strongest team of guard passers the sport had ever seen, during that decade. Such a physical environment pushed a young and skinny De La Riva to become a Guard Player. The guard was originally nicknamed the ‘Pudding Guard’ (Guarda Pudim on Portugese) due to the instability the guard caused in the opponent when used effectively.

During the the early 1990’s at Romero “Jacare” Cavalcanti’s academy(Master Jiu Jitsu), Leo “Leozinho” Vieira was hitting this on everyone as a variant of the cross choke with the lapel fed. At the time everyone was referring to the choke as being a “mean” choke for its aggressiveness, which in Portuguese is brabo (mean). From then on it was dubbed the Brabo Choke as it’s still known today.

Joe D’arce was a well known competitor in grappling tournaments during the mid 2000′s. A representative of Renzo Gracie and his New York jiu jitsu academy, D’arce learnt the technique from RGA’s coach, John Danaher.

Having won several fights making better use of the choke, D’arce caught the eye of another American grappler named Marc Laimon. Laimon labelled the technique “the darce choke”, and being a very well respected grappling coach in USA’s west coast, the name started being mentioned in the area to define the position. With the growing popularity of Jiu Jitsu in the west coast, darce became the more common name for this technique.

The name of this choke hold comes from a famous Brazilian judo olympian by the name of Ezequiel Paraguassú, who in 1988 decided to tighten up his ground work (newaza) ahead of the Seoul Olympics at the Carlson Gracie Academy. Paraguassú’s masterful control of this technique earned him the honour of having the choke named after him by the jiu jitsu community.

The omoplata appeared in Brazil either through judo or catch wrestling, both popular styles in Brazil during the 1930′s and 1940′s. The position was not seen as highly effective in the early days, but was still part of the curriculum taught by most jiu jitsu academies.

The word omoplata means scapula, or blade bone in Portuguese, this because of the mechanics involved in the movement. In judo, the ashi sankaku garami means leg triangle entanglement.

Also known as the rear naked choke the Mata Leao (or Lion Killer in Potugeuse) has been documented thoughout history. It is said that Hercules killed the Nemean Lion with this very move.

The Estima lock, is a straight footlock named after it’s inventor Victor Estima. However, both him and his brother Braulio have been seen to use this successively  in competition.

The name Berimbolo was created by Andre Galvao, it a colloquialism in Brazilian Portuguese which means ‘scramble’. Though the position is called Berimbolo, the act/action of spinning is actually called ‘Berimbolar’.

The Shaolin Sweep is a halfguard sweep designed to off balance your opponent and direct their weight over the top of you to complete the sweep.

Named after Vitor Ribiero, the nickname Shaolin came up when Vitor started training BJJ, he used to stay in the Lotus Flower position pretending to meditate like a Buddhist monk, just goofing around with his fellow training partners. As a joke the guys started calling him Shaolin. The name stuck to him and still stands to this date.

Developed by Atos black belt Keena Cornelious, the worm guard is the new hotness in BJJ.

As for it’s name, the name of this position was given by André Galvão, Cornelius’ coach, who was always present throughout the process of creating the position. Galvão was also Keenan’s main sparring partner in the development stages, as such, when the time came to find a suitable name for the guard, Keenan asked the Atos Academy leader to describe it. André said it was like fighting a worm, thus the worm guard name was created.

And now you know why that move is called that!