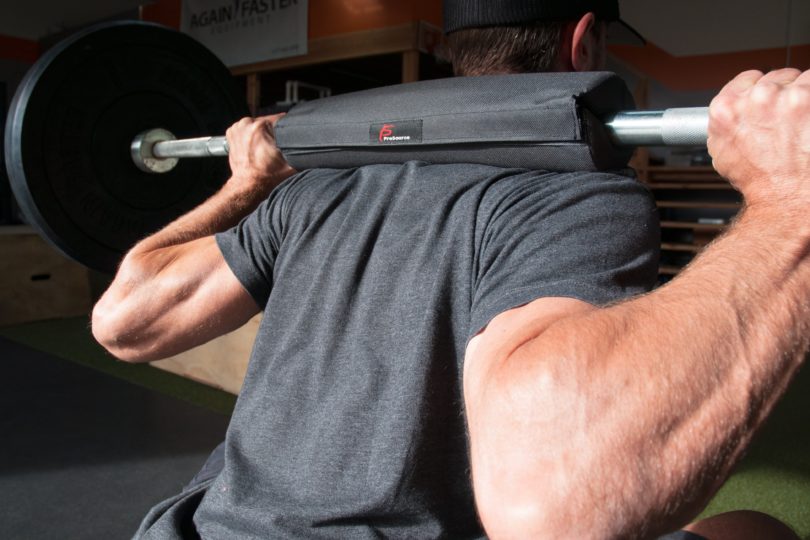 If you squat hard and you squat heavy, you’re going to want a barbell pad. In fact, you’re probably going to need a barbell pad. Going without one when you’re squatting light weights is fine and you can get away with it. But when you’re putting yourself under some seriously heavy weight, all of said weight is going to be driving itself into your back and shoulders, causing you some serious discomfort and eventual pain. Squats, if done wrong, can be a dangerous exercise, there’s no two ways about that. If you’re back is in serious pain from lack of padding, you could quite easily end up fumbling the lift and ending up serious trouble.

Iron Bull Strength have pulled out the stops when designing this pad. No stone has been left unturned and no positive feature missed out on. It’s really hard to fault this pad or to find even one thing that Iron Bull have missed in it’s expert construction.

Rather than the typical straight, cylinder pads that are common in most commercial gyms, Iron Bull Strength have made their pad more ergonomically correct and tapered in areas to better distribute the weight evenly across the width of your back/shoulders. This can often make the weight you’re lifting feel even lighter than it actually is, as the weight is much better distributed and not pressing into painful parts of your body. This also helps relieve the pressure on your vertebrae which not only prevents discomfort, but also helps prevent serious and permanent injury to your back.

The size of the pad is 16” x 3.5” which is the perfect size/length for a pad so that it fits comfortably and snugly inside most gym bags. Perfect for those who like to bring their own equipment with them, travel, etc.

If you’re skeptical about the benefits of using a barbell pad and want to test the waters without investing much money, then this pad from Yes4All might be the product for you. It’s available as a single pad and as a 2-pad set. Both are extremely cost-effective and perfect for those who just want to try it out whilst still being a worthwhile for effectiveness alone. The 2 pad set is perfect for those who have their own home gym/barbells but also travel/visit commercial gyms as well. Even better for those who train CrossFit style with a training partner so you can both do squats at the same time without one or both of you suffering unnecessary discomfort due to not having a barbell pad to cushion the weight.

Whether you have full size olympic barbells or the smaller/thinner barbells that many home gyms have, this pad will fit snugly and perfectly. The heavy duty velcro fastenings also you to quickly and easily attach and detach the pad when you want to but also keep the pad firmly in place whilst in use. It only comes off when you want it to, not mid-set.

This squat pad from ZSZBACE is another more compact, low-profile style of barbell pad. You can easily just chuck this into your gym bag without having to make room or play gym bag Tetris to make it fit securely and perfectly. The shape and size also helps it stand out amongst the more basic cylinder model so you can use it in commercial gyms without gym staff thinking that you’re stealing their equipment. The colour options of red and blue also help it stand out even further.

Despite it’s more compact sized, it still provides more than adequate support to your back and shoulders when you need it most. It’s slightly shorter than some squat pads too but it’s still long enough to fit most people perfectly.

This pad is also fastened with two straps, rather than a flimsy velcro curtain that adorns most common pads. This doubled fastening systems is understandably much safer than most models as your pad is secured to the bar twice. If one strap fails, which it won’t, you’ll still have the other strap holding fast. In fact, this pad is so safe that some people don’t even bother using the straps to fasten it all. But we would advise you to exercise caution and use the straps regardless to ensure your safety.

Now this product is a little bit different from the others. In fact, upon first glance you might think it looks more like a wrist support for a computer keyboard rather than a squat pad. But you’ll find that it’s quite ingenious.

The moulded pad sits perfectly across the full width of your shoulders with a round indent on the top of it to place the bar. The indent fits snugly against the barbell and spreads out the weight across the breadth of the pad even more so than the common barbell pads. This new and advanced ergonomic design is really taking the fitness world by storm as it’s just so much more comfortable than usual. Squats are an incredibly uncomfortable exercise; you really want to ease that discomfort as much as possible and we can’t think of many better ways than by using this pad from LinkinSport.

It comes in two different colours and is made from washable, high quality TPE to make it easy to clean and keep fresh from sweat and grime.

It can also be safely attached to a variety of different barbell sizes, not just limited to olympic barbells.

Ignore the idiots who mock those who wear pads when they squat; there is absolutely nothing to gain by not using a pad. It doesn’t make the exercise more effective. It might make the exercise harder but not more effective. You’re just making things tougher and more dangerous on yourself with literally no benefit. In fact, using a barbell pad can actually make you lift more and get even more results from your hard work, as you don’t have to fight against the discomfort of the bare bar driving into your spine.

You can even use the barbell pads when doing exercises such as hip thrusts. Now this is an exercise where the barbell pad is absolutely mandatory. Try doing barbell hip thrusts without a pad and you’ll find your hips covered in painful, sore bruises.

Squatting with and without a barbell pad is really a night and day difference. Once you’ve got your own pad and you’re using it consistently, you’ll struggle to squat without one.


It always kicks off when these two get together @p