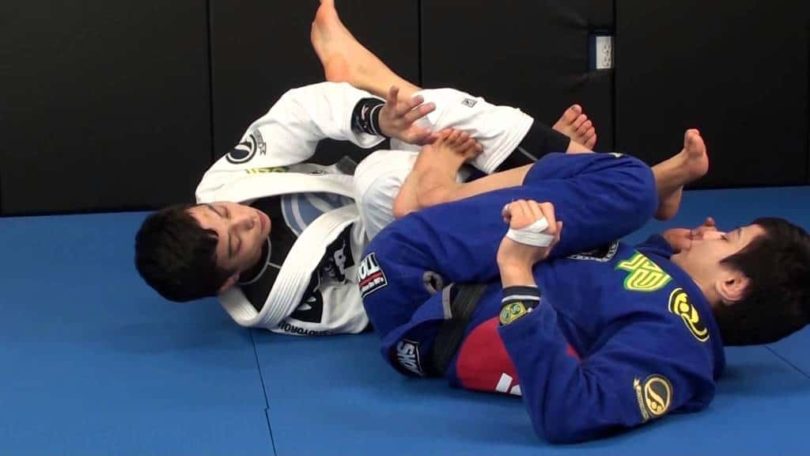 A Berimbau is a stringed instrument used in Capoeira. The Berimbolo is a sweep performed from the de la Riva guard used to take the back on an opponent. While they have similar names, they are not related except that both are examples of the creativity and artistry to come out of the country of Brazil.

Berimbolo instructionals – Get 10% off with the code ATBK10

There is much confusion in some Jiu Jitsu circles about what exactly the Berimbolo is. I first saw this technique being demonstrated by Rafael Mendes in video in Portuguese, posted below. I tried it a few times but couldn’t really figure out how to achieve the path to the back. Instead, I focused more on other de la Riva techniques, coming back to it over the years, without success.

Thanks to interest and explanation on forums such as the Sherdog grappling forum, I began to revisit the Berimbolo again, this time with a better understanding of when to use the technique. The back take from the inverted position is fairly easy, I found. Getting there was difficult for me at first. Once I started to think of the berimbolo as a counter move, specifically, a counter to your opponents attempt to counter your initial DLR back take, it all becomes much more clear.

To take the back from DLR you must extend your outside hook to force your opponents knees away from you. This usually allows you to get your other leg behind their knee and take the back. However, if your opponent sits down either preemptively to counter the back take or as a result of the pressure from your hook, its berimbolo time. Once the movement is intuitive its easy to perform as one complete sweep to the back, but I feel this is the best way to learn the berimbolo.

The first video above shows Rafael Mendes performing the sweep, followed by a series of videos of Mendes performing the sweep in competition. After than I’ve included one video of GB’s Samuel Braga performing an outstanding Berimbolo. Although the berimbolo was made famous by the Mendes brothers, it has been performed by several other competitors, including Braga. JHbjj from Sherdog filmed an excellent English language instructional for all of us Gringos to enjoy. Then, Jason Scully shows how he does the Berimbolo.

Scully admits its a work in progress and I have to admit that I problems with the first way that Jason demonstrates the technique. If you watch the Mendes or even Jasons second verson, they rotate fully underneath in one complete motion. This allows them to get the grip on the far hip as they spin onto the back. The hip grip is one of the most important elements of the move, and one that is often not emphasized. In contrast, Jason spins partly upside down and kicks his opponent forward, sliding his hook back to complete the back take. This is, in my experience, very difficult to perform. The beauty of the Berimbolo is that its one motion that puts you on the back with minimal effort. By forgoing the gripping chain (ankle -> hip -> collar) it makes this technique less efficient than the standard variation. Despite this, its important to not completely discount Jasons first version, as there will be situations where it will be the preferred variation. .

To get an even better sense of the dynamics of the berimbolo, several notable examples from high-level competition are included as well. Note that it rarely works as perfectly as shown in the demonstrations, instead leading to several different avenues that lead to a sweep, a leg drag pass or ultimately taking the back.

Unfortunately for aficionados of the berimbolo, theres been some controversy at the 2012 European Open about the legality of the sweep under the new IBJJF rules. The deep de la Riva guard does apply inward pressure on the knee during some sweeps. This pressure is similar to that of a knee reap, which is already illegal (although the merits of this is an entirely different issue). The berimbolo begins with putting pressure with the de la Riva hook to take the back. The entry to the berimbolo occurs when, to resist this pressure, the opponent sits down. If they simply turn away, a different back take is available, as mentioned above. However, in order to force the berimbolo some competitors were gripping the far sleeve, preventing the turn away. This was putting pressure on the knee with little chance to relieve it. Coupled with the deep underhook, which also adds pressure to the knee it seems that the berimbolo ran afoul of the recently updated rule: Section 6.3.2, #8 which bans locks twisting the knees. There are ways of performing the berimbolo without the sleeve grip and without underhooking the leg. Paulo Miayo performed the technique at the 2012 European Open with a deep overhook instead, grabbing his own pants (video below).

This article originally featured on The Jiu-Jitsu Laboratory and has been posted with the permission of the owner.