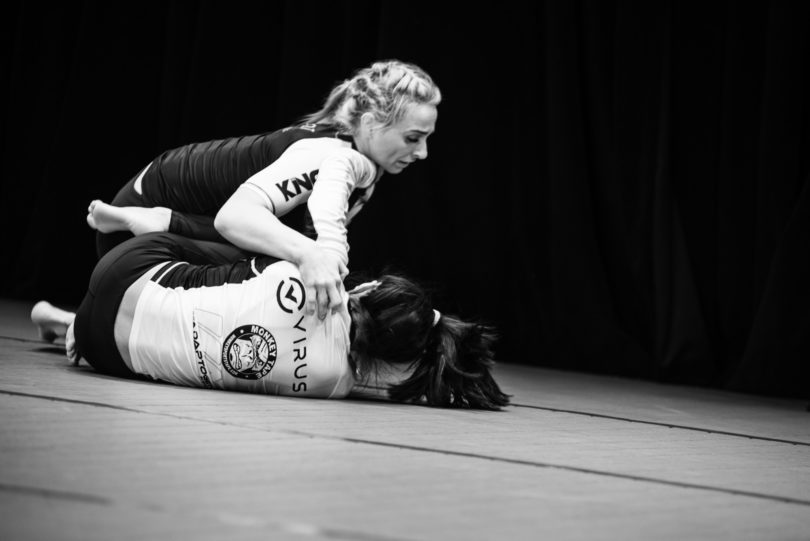 We see more and more people shy away from playing half guard centric games and for good reasons. A half guard can be considered by some as a guard that is already half passed. In most cases, competitors opt to play an array of open guards to sweep, submit, or to just maintain the position.

However, it is also common that you find yourself defending from half guard. A lot of good passers will force a guard player into half guard to get rid of the different open guards. The Z-guard is a variation of the half guard that can come in handy whether you’re defending passes or going for different attacks from the position.

One of the things that make Z-guard a good option from half guard is that you get to keep your hip up. Getting your hips flat on the mat is a recipe for getting passed. But with Z-guard, you get to have your knee and even have the leverage to have your frame against the opponent.

It is a good solution against passers who tend to use knee slice as their primary passing sequence. And since you are on your side, it can also allow you to scramble back on your knees when he or she decides to continue to pass.

The Z-guard is also a good starting point if you are looking to go for a sweep or even hunt for an opponent’s back.

How Does the Z-Guard Work?

How do you go for a Z-guard? Z-guard is when you are in half guard position and you use your top knee as a frame against your opponent’s chest. You also have to get your hip up and face your opponent to have an effective Z-guard. To prevent the top guy from smashing your top leg, it is important to have a 45-degree angle on your top leg. One common mistake is that the leg isn’t placed against the opponent’s chest making it easier to deal with the z-guard.

One of the things that make the Z-guard effective is the ability of the knee shield to manage the distance against the top opponent. This guard is effective in both gi and nogi. With additional grips on the lapel and on the sleeves, the Z-guard becomes a good sweeping position or sometimes even a good way to set up a back take.

The Shaolin Sweep seems like a fancy way to attack from Z-guard but in concept, this move is simple and easy to execute. From the Z-guard position, it is important to fight for the cross grip sleeve. Commonly, the person on top will grab your collar. An important key to winning grip fighting in BJJ is to never let the grip stay too long or too high in your collar. The moment that you feel your opponent grabbing your collar, be sure to use a c-grip and break it not only using your hands but also using the leverage generated by the knee shield position.

Once you break the collar grip, establish a cross grip sleeve coming from your top arm. Next, the bottom arm will be controlling the far knee of your opponent. To get the sweep, it is important to force the controlled sleeve across your body and into the hip.

With both the knee grip and the sleeve grip, you get your hip flat and use the momentum to do a back roll. This classic Shaolin sweep requires a push and pull action. It is an action-reaction sequence that will typically make it easier to get the sweep if the opponent pushes back.

Failed Shaolin Sweep to Back Take from Z Guard

One of the most common problems that you might encounter with the Shaolin Sweep is that you end up losing momentum and not getting the backroll that you need. What you can do instead is to wiper your leg to the other side. At the same time, you are going to switch the leg that is being trapped. You are going to get the other leg in between your leg as you move the other way. The grip by the knee also helps in guiding the leg to shoot in between your leg which can serve automatically as your bottom hook.

If you are not too fancy, it is possible to use the Z-guard as a starting point for an old school sweep or even work your way towards a back take. From having your Z-guard, you can grab the outside part of your own knee. Once you are ready, you can straighten it and use the momentum of your knee to get your underhook.

From your underhook, multiple options can be seen from here. It is possible to grab the hip and go to the opponent’s side. You can also collapse the far knee to finish a classic half guard sweep. If you feel that the top opponent tries to gain some type of control by overhooking your underhook arm, you can trap this arm and simply barrel roll the other way.

And also, once you have the underhook, it becomes possible to fight for the back. You can do it by shrugging the opponent making him or her post both hands on the mat allowing the half guard player to switch to the back and get back control.

Caio Terra is also known for doing a backtake from Z-guard. But instead of getting the knee shield high, Caio Terra designed his Z-guard pointing across the hip. However, the main difference is that he doesn’t line his entire shin to the opponent’s waist. Therefore, it still prevents the other guy from smashing the guard completely. It is also important to point the nuance wherein he steps on his own foot making this type of Z-guard tight.

What he does is simply do a Granby roll. With his Z-guard, it pinches the opponent’s hip allowing him to lift the opponent and get underneath to work the backtake. This becomes similar mechanics when he does his reverse Dela Riva backtake.

Diversifying Your Half Guard

Every guard player should learn to play Z-guard because it offers a more aggressive approach compared to other types of half guards. It can be used not only as a defensive guard against knee cut passing, but it can also be a guard where you can improve your position.