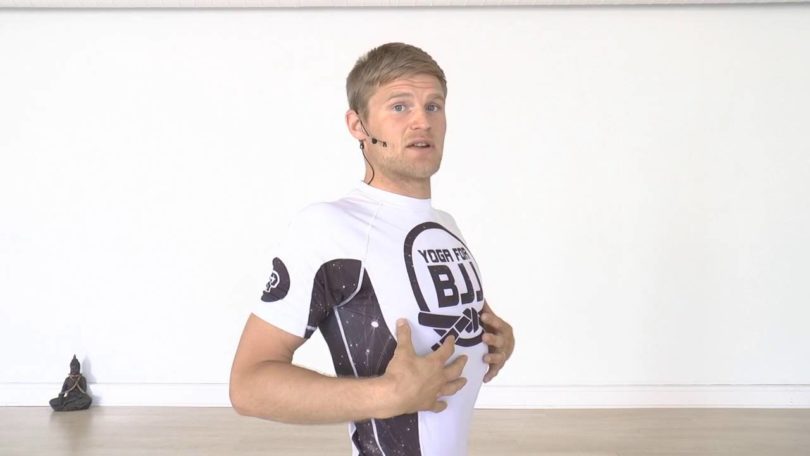 If you practice Brazilian Jiu-Jitsu then you’re probably already doing accessory gym work to help with your condition, and there’s nothing wrong with that. After all, you want to keep up the pace with the best in the class and be sharp in competition.

However excessive BJJ and Accessory work can also come with consequences, BJJ is an incredibly tense sport, a lot of the sport involves tight isometric positions, such as holding someone down in side control, or keeping someone’s posture broken in mount. With the tight muscle movements also comes shortening of the tendon, especially in the feet where you’re constantly flexing your feet to be used as “hooks”.

When you talk about the body and BJJ, muscle tightness is one thing which people mention, but a lot of people fail to mention muscular imbalance, a lot of people will practice techniques and also spar using a dominant side, which makes sense considering everyone has a dominant writing and walking side.

But there is a fix, and that is Yoga! While yoga used to have the reputation of middle-aged ladies in spandex saying “namaste”, more and more young people are getting into this as it’s an incredible workout and also teaches you some valuable life lessons. Yoga can also help with your muscle imbalances, as it challenges you to focus on positions for both sides of your body, helping with the imbalances that Jiu-Jitsu causes.

So how does Yoga for BJJ work? Let’s find out

What is Yoga for BJJ?

Yoga for BJJ was created and is continually developed by Brazilian Jiu-Jitsu black belt Sebastian Brosche. Before his BJJ story began Sebastian was part of the Swedish national Judo team, earning the rank of second dan before discovering Jiu-Jitsu.

However, the beatings from a high-level of competition judo started to take its toll with two herniated disk Sebastian was in debilitating pain.

After meeting his wife, he was introduced to yoga and his life would change forever. After starting vinyasa yoga, Sebastian would notice that his back pain would start to decrease the more he practised yoga, meaning he was able to practice more Jiu-Jitsu.

That is how Yoga for BJJ was born.

Over the years Yoga for BJJ has taken many forms and today’s form features numerous classes and continues to go. It caters for the very beginners to more advanced practitioners, to even catering for incredibly inflexible people who they like to affectionately name “rocks”.

Get Your 14-Day Free Trial of Yoga for BJJ Today

Since it’s inception Yoga for BJJ has gone through many changes, these days it’s settled on a format which is incredibly user-friendly.

After a large overhaul, the website is incredibly user intuitive and allows you to follow their simple programs in an easy step by step format.

These are the typical yoga programs for the course, and they are as follows:

All of these programs are pretty self-explanatory, however, one of the better programs is their famous Yoga for Rocks program, this is the best if you’re looking to gain more flexibility in specific areas such as your hips and shoulders and even features a course which will help with your inverted guard.

Using this course has helped with my hip flexibility incredibly and problems with inverting have become a thing of the past, highly recommended.

The stretches focused heavily on hip mobility in closed guard, leg extension for spider guard and overall flexibility to help with guard retention.

The course also includes modifiers, where you can use a belt or a wall to help assist in the movements. Overall there are 5 courses in the program, which are around 20 minutes each.

Yoga for BJJ also features a relatively new section called Rehab, these are programs designed to do what they say on the tin. Help you rehabilitate any ongoing injuries and issues you may have. All the courses, much like the yoga focus on specific areas of the body which means you can target that niggling injury you’ve had for months.

However, even Sebastian says he’s not a doctor and that you should seek medical advice where possible.

The Yoga for BJJ App

Now Yoga for BJJ is available on the move.

The Yoga for BJJ App allows you to keep practising on the go, which is incredibly handy. The app is incredibly well organised and also features the ability to mark your favourite workouts.

You can also locally download content onto your phone so if you happen to be in the middle of nowhere without internet signal, you can still get your yoga workouts done.

You can even stream your workouts to your television using chrome cast or airplay, so Sebastian can now be on your tv!

The pricing is incredibly reasonable and a month’s subscription of Yoga for BJJ is significantly cheaper than going to a yoga studio, plus there’s the added benefit that you’re actually doing more BJJ-centric movement instead of going through normal flows.

The pricing is as follows:

Overall Yoga for BJJ is perfect for anyone who has been considering yoga as a way of improving their strength and flexibility. I would highly recommend this program, so if you would like to try out a 14-day free trial, click here.

@sfishmanbjj wins his Polaris match with an inside