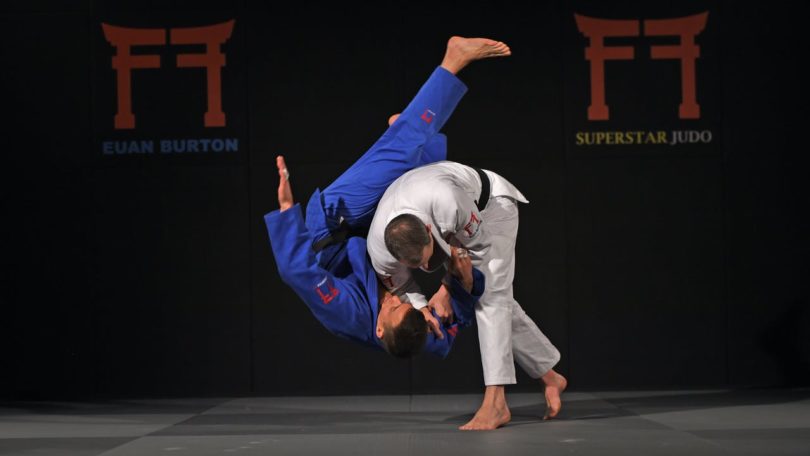 Yama Arashi or the “mountain storm” is a throw that belonged to the fifth group of the 1895 Gyoko no Waza list. Classified as a Te-Waza or a hand technique, this throw is something that you rarely see in actual sparring or competitions.

It means that there are two different lifting mechanics between the Harai Goshi and the Yama Arashi. For the Yama Arashi, the tori is going to grab the cross collar grip and a tricep grip. These grips on the upper body will generate the force to off-balance the uke. As for doing a Harai Goshi, you’d see that the entire hip connects to the opponent’s hip off-balancing the uke. Harai Goshi hits the uke’s center of gravity using the tori’s hips and by lowering his or her base.

How to Perform a Yama Arashi?

The Yama Arashi starts with a cross collar grip and the other hand concentrating on the tricep or sleeve of the uke. It means that you have control of one side. To execute the throw, it is important to get the proper reaction from the Uke. A tori usually pulls the uke forward and down first to make it easier for them to off-balance the uke afterwards. This pull will usually create a reaction on the part of the uke to posture back up. At the same time, the tori will pull up and to the side. This will make the uke light and ideally balancing on just one foot.

The tori will keep on pulling up and do a cross step. Once the tori does a cross step, he or she will twist 180 degrees to face the same direction as the uke. The tori will then redirect the pull and pull forward. Since the hands aren’t enough to get the uke’s entire body over, the tori will have to use the leg similar to doing a Hara Goshi to take out the opponent’s base.

There are a lot of reasons why you don’t get to see the Yama Arashi often during competitions and in actual sparring. One, unlike a Harai Goshi, you have to consider the fact that getting someone’s weight off mostly your hands is a difficult move. On the other hand, using the hip to get the uke’s base off is simpler and can be done even by a beginner without relying too much on strength and explosiveness.

And also in judo, grabbing the same side sleeve and collar (cross collar) limits your setup time. IJF rules only allow you to stick to this grip for five seconds. It means that you have limited time to fully execute the Yama Arashi and other similar throws that make use of this kind of grip. It means that there are more opportunities to hit a Harai Goshi than a Yama Arashi.

There are different ways on how you can set up the Yama Arashi. Because it involves the use of the arms, you ideally want to hit this move while you are still fresh. If you feel that you want to be more efficient in executing the throw, it is important to make the uke react to the side. You can combine the throw with different foot techniques.

Also, it is equally important to try other throws using the same side grip. There are instances when you can hit a Morote Seoi Nage using a cross collar grip and collar sleeve on your opponent. It requires minimal changes in the movement of the tori since it also requires a cross step and turning the body 180 degrees.

There is also a chance to hit an Uki Otoshi. A floating throw can be used but the angle is going to be different as the tori will tend to be perpendicular to the uke.

Training for Yama Arashi is a bit different than your Seoi Nage or even your Harai Goshi. It is important to emphasize your pull which will cause the uke to get off-balanced. You also have to make sure that you do proper strengthening. Though judo is supposed to be the gentle art, a resisting opponent will always tell a different story, especially when dealing with a Te Waza. This move requires a lot of endurance and explosiveness on the part of the tori.

During Uchikomi, you want to focus on two important details. One is to practice your pull. And on top of that, you also need to practice how you are going to cross-step and twist your body and turn 180 degrees.  By doing this, you build muscle memory making it easier to hit the move.

Timing is another important factor that you might want to consider if you are serious about using the Yama Arashi in actual sparring. Just like a shoulder throw, it is easier to catch an uke if he or she is either standing straight or moving forward. Training for Yama Arashi should involve awareness of how the uke is moving.

Judo’s rules limit the use of moves such as Yama Arashi. However, it is still possible to apply Yama Arashi outside judo’s rules. For instance, during a BJJ tournament, it is possible to hit this move. A lot of high level competitors are now utilizing the Uki Otoshi rather than the Seoi Nage. They take advantage of the cross collar grip in these instances.

There are a lot of throws that you rarely see. Either it is simply good for demonstration or the rules have changed over the years that it became obsolete. For the Yama Arashi, it’s safe to say that the mechanics are hard to pull off. Consider this as something that can catch the opponent off guard, but also something that you don’t get to see every day.