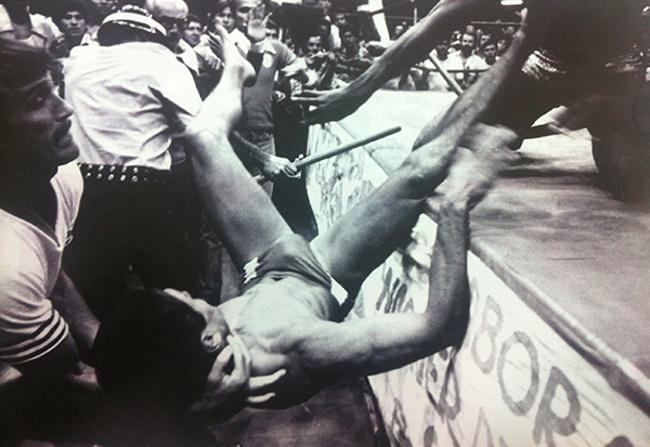 Before the MMA and before the UFC there was Vale Tudo, A “No-Holds-Barred” fighting sport that the Gracie family used to grow their name and brand and become one of the most influential families in martial arts.

What does Vale Tudo Mean?

Vale Tudo is the Portuguese translation for the phrase “Anything Goes”, so you can guess what kind of sport this is going to be. This was the roots of today’s modern mixed martial arts, where people from all walks of life and training were able to compete in a competitive environment with very few rules in front of a crowd.

The History of Vale Tudo

The beginnings of Vale Tudo can be traced back to as early as 1920 where they would be part of touring carnivals and travelling circuses, instead of organised bouts in a specific location. Examples of Vale Tudo were documented by a Japanese-America Courier in 1928, where a report from Brazil described a big circus tent where a “Bahian of monstrous dimensions” would meet his match against a “diminutive Japanese Wrestler”.

Between the 1920s and 1950s, the growth of Vale Tudo slowly increased, with more circuses and carnivals introducing them to gain more and more spectators. During this period the press would pick up the story describing the sport as barbaric and described injuries such as concussions, spinal, organ and eye injuries as common practice in the sport. This was mainly due to the non-regulated nature of the sport due to the lack of rules.

In 1960, Vale Tudo gained its first taste of legitimacy, when it was featured on a television show in Rio de Janeiro called Heróis do Ringue known as “Heroes of the Ring” in English. The matchmakers of the show would include Gracie family members Carlson and Carley and all participants were legitimate martial arts practitioners.

During the show, João Alberto Barreto, who would later become a referee in UFC 1, competed against a Luta Livre trained opponent. Barreto would catch his opponent in an armbar and the man refused to tap to the submission, consequently, Barreto broke the fighter’s arm, causing the show to be cancelled and be replaced with a professional wrestling show called Telecatch.

After it’s short run on television Vale Tudo would go back underground but would move away from its carnival and circus roots. Now Vale Tudo matches were organised in martial arts dojos and gymnasiums in Rio de Janerio and northern and southern regions of Brazil.

During this time the Gracie family would use these “organised” bouts to prove that their martial art was the most dominant. Members of the Gracie family would also personally organise challenges in local newspapers, calling for other martial arts practitioners to come to their dojo and compete in a Vale Tudo style matchup. The “ads” normally read like “If you want to get your face smashed, then come to the Gracie Academy and talk to Carlos”.

To encourage matchups, Carlos Gracie would offer up large monetary prizes for anyone who would be able to better a Gracie family member in a fight. These vale tudo challenges were a big proponent of the rise of the Gracie Family.

During the peak of Vale Tudo’s popularity, one of the most popular fighters in the sport was non-other than Rickson Gracie. As the sport began to slowing come out of the underground culters, Rickson would be at the forefront of the sport.

The third son of Grandmaster Helio Gracie, Rickson would cement his name in Vale Tudo history after his notorious fight against Rel Zulu, a giant of a man and a master of martial arts in his own right. Rel Zulu had claimed to have fought and defeated over 100 men before coming up against Rickson.

The first round saw Rickson get off to a bad start, where Rel would dominate him with his strength and skill and would actually throw the young Gracie out of the Vale Tudo right three times.

Broken and already defeated, Rickson contemplated admitting defeat to the giant, to the disgust of his father Helio. Before the second round started, Rolls, Rickson’s brother threw an ice-cold bucket of water over him to wake him up.

The effect of the ice-cold splash snapped Rickson out of his slump and he went on to defeat Rel Zulu with a rear-naked choke in the next round.

The two would once again come to blows in a rematch three years later, this time Gracie would dominate Zulu and would promptly choke out his opponent in front of a crowd of 15,000 people.

Rickson Gracie would go on to become the legend he is today thanks to his reign at Vale Tudo.

In the 1970s Rorion Gracie would emigrate to the United States to spread the art of Brazilian Jiu-Jitsu and also look at introducing the sport of Vale Tudo to a new market. In 1993 the first Ultimate Fighting Championship took place marking a moment in martial arts history.

The rules of Valo Rules are simple, there were no rules. In a sport that literally translates to “Anything Goes”, there was very little room. However, the modern iterations of the sport have made measures to prevent catastrophic injuries while still keeping as close to the “Anything Goes” roots.

These days Vale Tudo is competed with fingerless gloves to protect fighters hands and things such as eye gouges, groin strikes and fish hooking has been outlawed.

Today Vale Tudo is still contested in many parts of Brazil. However, due to its violent nature, it still gets a bad reputation in the media. Many people have encouraged more strict and safer rules, but the underground nature of the sport stops it from any sanctioning. People who compete in Vale Tudo look at it’s similarities to MMA and say that they should be recognised as a separate entity, such as K1 Kickboxing and Muay Thai