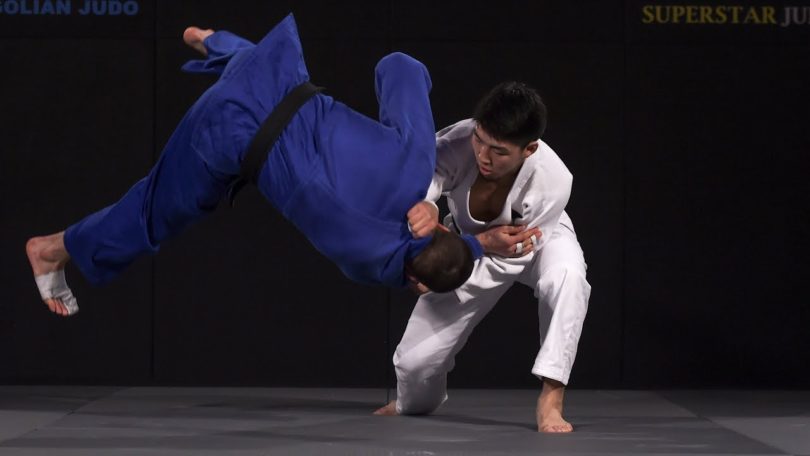 The Uki Otoshi otherwise known as a floating throw is one of the forty moves developed by Jigoro Kano. It is also part of the 67 throws of the Kodokan Judo. Considered as a hand technique or a Te-Waza, Uki Otoshi is a move that requires timing.

A lot of black belts believe that this throw is meant only for demonstration. But is it the case? The floating throw is done by pulling and circling the uke towards his or her shoulder. Though it looks good during demonstration and with the help of a willing partner, how do you do it with a live partner?

How to perform the Uki Otoshi

To perform the Uki Goshi, it is important to have a grip by the collar and a grip by the sleeve. Unlike other throws that use tricep control, Uki Otoshi usually requires a sleeve control because it makes it easier to remove a posting hand and get the shoulder towards the mat.

Next, it is also important for the tori to move back and twist his body. This will get the uke down to the mat.

However, if you are going to do this in actual competition against someone who is resisting and trying his or her attacks as well, things can be a bit tricky. It is important to learn how to set it up. Plus, there are instances when you can make a few adjustments with the grips. If you are doing judo rules and you are only allowed to grip the same side collar and sleeve for a short period, you need to hit this move right away. Having control of the same side collar and the same side sleeve makes it easier to overwhelm one side of the opponent.

Combining Moves with The Uki Otoshi

A good way to set the Uki Otoshi is to use foot sweeps. This will keep the uke stepping to maintain his or her base. A good example of the Uki Otoshi has been demonstrated by Tim Spriggs. In a Brazilian Jiu Jitsu tournament, it is allowed to grab the same side sleeve and collar during standup regardless of the duration.

In this video, Tim Spriggs first makes the uke to step out. Now, hitting the Uki Otoshi successfully relies on your timing. It is important to hit the throw before the opponent gets to both feet and establish a strong base.

Consider the circling motion to be one of the most important things for the success of this throw. Apart from the fact that you can use foot sweeps to catch the uke while stepping, it is also a good idea to use leverage and stay towards the side. It means that if you are going to circle the uke towards the right, you want to step on your left. In addition to this, you want to circle towards the mat and at the same time get your step back. This can potentially make a strong pulling motion that can get the opponent to lose his or her base.

A lot of Brazilian Jiu Jitsu athletes use this setup. This takedown is becoming popular for several reasons. One, unlike in Judo, Brazilian Jiu Jitsu tournaments aren’t strict with their rules when it comes to gripping. You can grip the same side collar and same side sleeve. In addition to this, due to the fact that the match will continue even when you turtle, a lot of BJJ athletes are no longer doing Seoi Nage. It’s such a risky move that twisting your move too much can get your back exposed and you can even get finished.

But with the Uki Otoshi, you don’t need to twist 180-degrees. Instead, you can step back and drive the opponent’s shoulder to the mat.

Another reason why it is a great option even during BJJ matches is the fact that you can transition towards other takedown attempts in case you need to. You can easily get to a single leg if the uke gets to recover on his or her feet. It is also possible to go to a quick ankle pick by removing the grip on the sleeve and continue pulling using the collar grip.

These variations that can be used along with the Uki Otoshi is a good reason why it is now popularly used in BJJ tournaments.

And nowadays, other tournaments prevent players from pulling guard right away. ACBJJ gives players a chance to showcase their takedown attacks by penalizing guard pulls on the first minute. And because of this, spectators get some action both on the ground and on the stand-up. If you will look at super fights from F2W, they are also bringing judo into the mix which puts takedowns on center stage.

There are a lot of BJJ players today that are doing a modified Uki Otoshi to get the opponent’s shoulder into the mat. For instance, to increase the drive, instead of just stepping back, you can even kneel as you circle the opponent and get his shoulder to hit the mat.

It can be used as a 1-2 combination between the usual Uki Otoshi and the modified version. Rodolfo Vieira is known for this. He’d pull and circle the opponent’s shoulder down to the mat and once the uke recovers from the first attempt, he then pulls again but this time kneel.

The beauty of this throw is that you already have the grips needed for a knee slice. A lot of takedowns by Rodolfo Vieira using this move is followed by a knee slice with a cross collar grip. There is even a chance that you can bait the opponent to turn and face you if you wish to finish a cross collar choke.