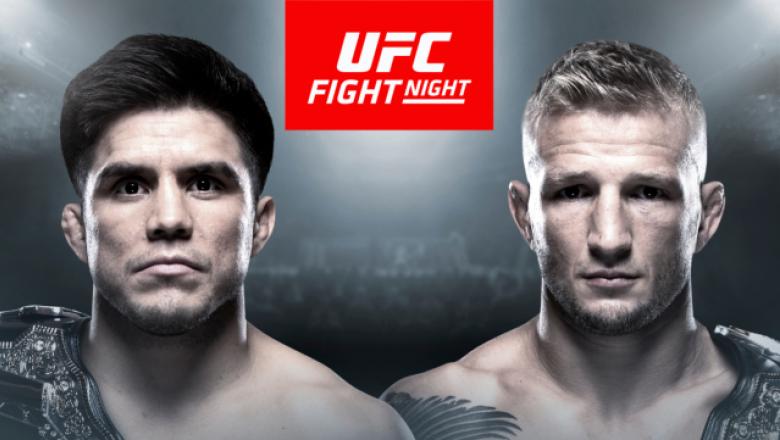 Whatever the event is called – UFC on ESPN+1, UFC Fight Night 143, or UFC Fight Night: Cejudo vs. Dillashaw – this Saturday’s UFC card at the Barclays Center could make history.

Bantamweight champion TJ Dillashaw (16-3, 8 KOs) is aiming to become just the third man to simultaneously hold belts in two different weight-classes, following in the footsteps of Conor McGregor and Daniel Cormier. To earn that honour, Dillashaw will have to take the flyweight crown from reigning king Henry Cejudo (13-2, 5 KOs).

Whoever emerges victorious may go down in the record books as the UFC’s last flyweight champion as the division will likely be dissolved in 2019.

The bigger, taller Dillashaw is currently a heavy favourite at -210. Cejudo is +170, despite ending Demetrious Johnson’s record-setting title reign (11 defences) in his last fight.

The Tale of the Tape

Dropping down to 125 pounds for the first time in his career, the 32-year-old Dillashaw will have a decided size advantage. The bantamweight champion stands 5’7 with a 67” reach.

Cejudo, 31, is a diminutive 5’4 with just a 64” reach. He will be the significantly lighter fighter when the Octagon door closes.

Dillashaw enters on a four-fight win streak dating back to July 2016. That streak includes two KOs of archrival Cody Garbrandt, plus unanimous decisions over John Lineker and Raphael Assuncao.

Cejudo has won three in a row dating back to September 2017. In that span, he’s TKOed Wilson Reis, won a unanimous decision over Sergio Pettis, and then claimed the flyweight belt in a split decision over Demetrious Johnson.

Cejudo vs Dillashaw will be a classic striker-vs-wrestler battle. Dillashaw is plenty capable on the ground, and Cejudo has respectable standup, but it’s clear that TJ wants this fight to stay on the feet and Henry wants it on the mat.

Cejudo is an Olympic gold medalist wrestler. He earned his split-decision win over Johnson last August with three takedowns and will have a decided edge if this fight goes to the ground. But that’s a big if.

As Cole Shelton from sportsbettingdime.com notes, “Throughout his career, it has been hard to take Dillashaw down.” That’s actually a bit of an understatement. FightMetric lists him with an 86% takedown defence. He’s only been taken down once in his last four fights, stuffing five of six takedown attempts in that time.

The last man to defeat Dillashaw, Dominick Cruz, was also the last man to take him down with any success. Cruz was 4/11 on takedown attempts when they met in January 2016. He basically gave Cejudo the blueprint for beating Dillashaw.

However, Cruz is also 5’8”, an accomplished striker, and was significantly heavier than Cejudo will be on fight night.

Can Cejudo’s wrestling pedigree counter the weight discrepancy and the fact that Dillashaw won’t be too worried about his power?

As good a wrestler as Cejudo is, Dillashaw is too big and too strong for Cejudo to control on the ground. Even if “The Messenger” delivers a couple takedowns, expect Dillashaw to scramble back to his feet relatively quickly.

And when the fight is on its feet, Dillashaw’s standup will win out. In his last four fights, he’s outclassed every one of his opponents. His last two fights were knockouts of Cody Garbrandt, one of the elite strikers in the bantamweight division.

There will be concerns over Dillashaw’s endurance at 125. He’s had to undertake a weight-cut that’s 10 pounds more than any he’s attempted before. His motor has never been a problem at 135, though, and he’s had time to make the cut properly.