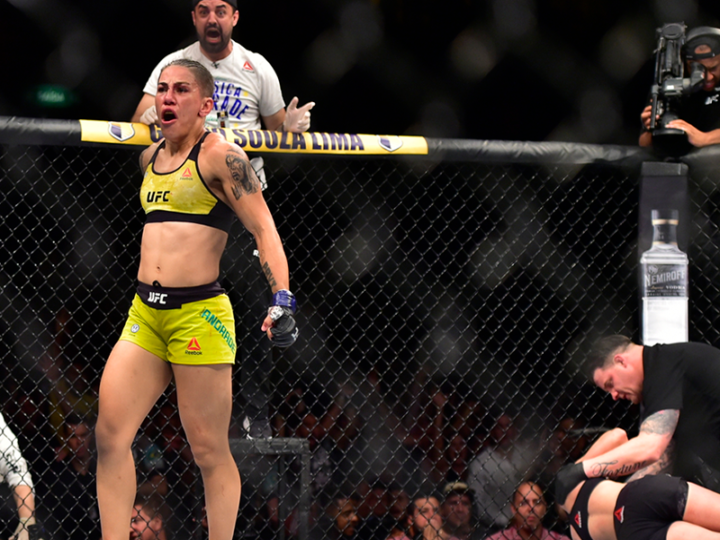 2019 didn’t exactly get off to the best start MMA-wise when UFC 233 was mysteriously cancelled back in January. Since then, it’s been business as usual inside the Octagon, with Light Heavyweight Champ Jon ‘Bones’ Jones successfully defending his title once again being one of the standout moments of the past 5 months. Just when we were starting to get used to smooth sailing, however, UFC 237 came along and delivered some shocking blows to MMA fans everywhere.

The all new PokerStars-branded Octagon in Rio’s Jeunesse Arena saw some pretty surprising losses play out on Saturday May 11th, starting with the defeat of a seemingly untouchable UFC legend and ending with what could be the final fight of one of the brightest talents in WMMA.

Coming in off back-to-back victories, former UFC Featherweight champ and (the then) World No.1 145-pound fighter, Jose Aldo looked set to halt rising talent Alexander Volkanovski in his tracks. Fighting in front a passionate home crowd, the BJJ exponent and deadly striker was certainly going to have his work cut out with the Aussie challenger, but Aldo’s maturity and all-round phenomenal abilities meant that he was more than capable of dealing with whatever the No. 4 ranked upstart would throw his way. Or was he?

Maybe Aldo’s self-believe was boosted a bit too much by his rise back to the top after losing the Featherweight belt to Max Holloway, or maybe he was simply outmaneuvered by Volkanovski. Whatever the reason, the Brazilian just couldn’t get the engine fired up enough to take the challenger out with a one-shot KO and, after five laborious rounds, the decision was not cast in his favour.

From the outset, Volkanovski successfully kept Aldo’s powerful strikes at bay, even landing a substantial overhand left at the bell of the first round. Although Aldo fought back during the second round, landing a particularly stiff jab during the second minute, he just couldn’t make the magic happen and continued to be outworked by Volkanovski in the rounds to follow.

A no-show at the official post-fight press conference, Aldo later took to social media to discuss the first ever decision loss of his career – “I’ve never fought so badly in my life” he shared in an Instagram post. “I know what I can do…not taking the merits away from my opponent, he did his fight, but I’m upset with myself and I transfer all the blame.”

In contrast to Aldo and Volkanovski’s somewhat clinical MMA by numbers fight, “Thug” Rose Namajunas looked well on her way to another victory and successful defence of her Strawweight title.

Namajunas returned to the cage on May 11th following a 13-month break from the sport, after being caught in the crossfire of Conor McGregor’s vicious attempt to get revenge on Khabib Nurmagomedov during the UFC 223 press week last April. The Genesis athlete was a passenger on the bus that McGregor attacked and her scheduled title defence against Joanna Jedrzejczyk was almost cancelled. After being cleared to fight, however, Namajunas went toe to toe with the Polish fly- and strawweight competitor and held onto the belt.

By all accounts, Namajunas was expected to walk out of the Jeunesse Arena with the belt firmly in her grip once more, but one single stunt from Andrade upset the balance and has caused her to reflect even more about whether this sport she excels at is one she truly wants to continue with.

The bout started with Namajunas easily winning the first round; her expert control and huge speed advances making it an almost perfect display. She connected with her first two jabs and from then on continued to tag the Brazilian, who was quickly bloodied up by Thug’s blistering combinations. Clearly in trouble, Andrade went for a takedown, using her prodigious strength to lift Namajunas off the canvas into a body slam. The champion was unfazed and locked in a kimura, which Andrade eventually worked her way out of.

The second round started off in a similar way, with a calm and collected Namajunas clearly winning the striking battle by bloodying up her opponent again. She did, however, seem to be slowing down somewhat, which gave Andrade the perfect opportunity to pin her against the cage wall and try body slamming her again. This time around it worked, Namajunas landed on her head and was immediately knocked out cold.

Having regained consciousness and with not a single cut or bruise on her face, an exhausted Namajunas explained in the post-fight press conference that for the moment, she just wants to do “something else”. Although she wouldn’t be pushed further on whether she would announce her retirement, she did admit that as far as continuing to fight for the UFC goes she doesn’t know and needs to “see if (I’m) still interested in this”.

Next
Best Spats for BJJ and MMA 2021
Comments are closed.