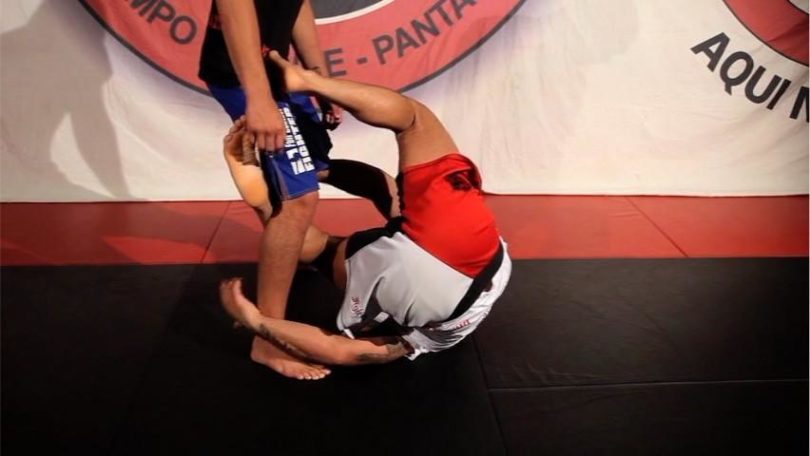 Inversions in BJJ aren’t exactly new. Tornado guard, also known as the Roleta Guard, is a type of guard that was developed by Roberto Magalhaes also known as Roleta. It’s a creative means to maintain and recover guard especially when you are almost passed or when your opponent is already nearing to clear your leg.

Today, the tornado guard is more commonly known as an inverted guard. Inversions are commonly used to hit berimbolo, Kiss of Dragon, and even a good way to enter into leg attacks. It’s a move that you commonly see among players from lower weight classes. From the Mendes Brothers to the Miyaos, we’ve seen several highly competitive small guys invest on this guard and win in big BJJ tournaments.

History of the Inverted Guard

The history of the inverted guard can be traced back during the 1990s. Though going upside down is a critical part of guard recovery, Roleta became known for developing a dynamic inverted guard. He made it as one of his go-to moves and developed different attacks from this position.

When the Roleta guard was developed, it was also one of those times when Gracie Barra had one of the most creative lineups of jiujitsu competitors. Apart from the inverted guard that Roleta was using, it was also the same time when the Spider Guard and half guard games were being developed in Gracie Barra.

Roleta was able to tighten up the inverted guard during his brown belt years. In 1996, he was promoted by Carlinhos Gracie to black belt right before that year’s World Championship. In his division, Wallid Ismail of Carlson Gracie team was the heavy favorite to win the division. However, Roleta was able to upset the favorite Ismail using his inverted guard. He was able to win the world championship via a sweep a few seconds before the match ended.

Cyborg and His Tornado Guard

Robert “Cyborg” Abreu revolutionized the tornado guard and made his own version. His tornado sweep is known to work especially against those who will put their weight on the leg while you are inverted. This is a common reaction when the top player is trying to smash the guard player in an uncomfortable position.

Though there are similarities to the tornado guard introduced by Roleta, Cybrog’s version is a bit different. For instance, Cybrog’s tornado guard came from a half guard position. On the other hand, Roleta’s version comes from different angles.

Cyborg’s popular attack from his tornado guard is his tornado guard sweep. This sweep comes from half guard therefore; you start on your side mostly on your shoulder before inverting. He has a frame on his opponent’s shoulder holding the gi. The bottom arm will then grab the trapped leg using a pistol grip. Next, the top leg will have to go across the shoulder on the other side to create the leverage to invert. Once inverted, the framing arm will have to pull the collar to load the opponent on your leg.

From Cyborg Abreu’s version of the tornado guard, lapel variation of this guard has been developed along with the worm guard. One of the most common counters to the worm guard is to place the wrapped leg in between the legs of the passer. Once the wrapped leg is trapped in between the leg, a lot of passers revert towards a kneeling passing game to put pressure against the guard player. Some even try to fight for an over under pass.

Keenan Cornelius and Andris Brunovskis are known for executing the wormnado. Using the same principles, instead of going for a pistol grip on the pant, they’d switch towards a reverse dela worm grip. To hit the wormnado, the bottom player will follow the same principles of the tornado guard by having a frame by the collar and getting the free leg over the opponent’s shoulder on the other side.

When to Use the Inverted Guard?

Inversions are best used if the opponent is trying to impose pressure. You can use your opponent’s pressure as leverage in order to invert and re-center back to your guard.

However, there are also some dangers to inverting too much. If you invert while your opponent’s posture is up, you don’t get enough leverage that you need. This puts yourself at risk of getting your back taken.

Unfortunately, inversions aren’t for everyone. A lot of those who use inversions as a staple in their guard attack and guard recovery are those who have enough flexibility to get upside down with their knee right in front of their face. A lot of people who are heavy and older BJJ players lack the flexibility to use this as part of their guard game. Plus, a lot of players have injured their neck and back using this technique.

Tornado Guard and Its Influence in Modern BJJ

The tornado guard or the inverted guard has influenced a great number of modern BJJ competitors. From berimbolo attacks to impassable guards, a lot of these moves are now normalized in sport jiujitsu thanks to what Roleta developed in the 90s.

Because of this, a lot of old school defense-oriented players are vocal how BJJ today has strayed from the martial art that was developed by Helio Gracie. A lot of these old-school BJJ practitioners believed that BJJ should be used primarily for self-defense and some moves have lost their practical value.

Regardless of your opinion of sport jiujitsu, the tornado guard is a milestone in sport jiutjisu’s evolution. It has created dangerous guard players and evolved the game in general.