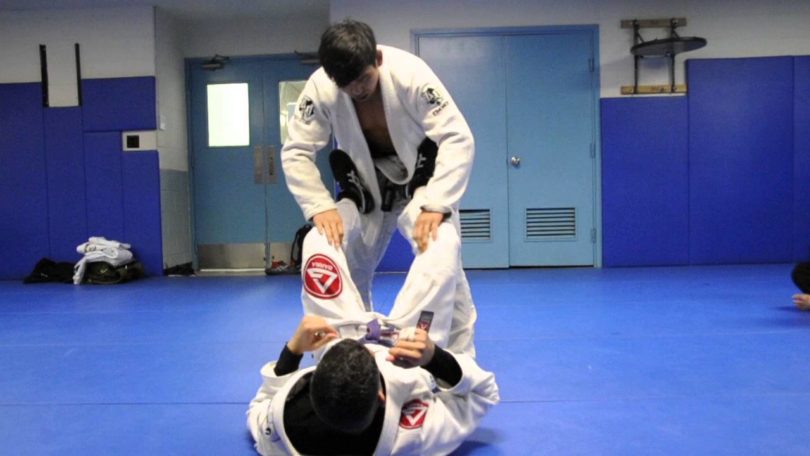 Known as the bull fighter pass, toreando passing is probably the first pass that you’ve learned from your academy. This passing sequence is easy to understand for beginners to advanced practitioners. And on top of that, it is a high percentage pass that can be used across all belts. However, over the years, toreando passing has become more advanced with its details. Ask different competitors how they prefer to do a toreando pass, and they will most likely give you different nuances.

Concept behind the Toreando Pass

The concept behind the toreando pass is to get the legs out of the way as you go to your opponent’s side or even go directly to North-South. However, this is easier said than done in actual sparring or competition. This type of toreando requires timing especially when the guard player made a mistake of extending the leg. For a beginner, this can be frustrating especially if up against a more experienced player.

Hand on hip toreando is a good way to start teaching this pass for beginners because it helps them understand that the hip should stay centered and not facing their direction. This concept translates to different passing opportunities whether it’s a knee cut pass or an overunder pass.

Ways to Do a Toreando Pass

There are different strategies on how you can hit a toreando depending on what the opponent is doing. However, the first requirement is that you need to have free legs that can move side to side. If you are dealing with someone who has a pant grip, this move is easily nullified.

One of the best ways to do it is by having both grips by the shin of your opponent. To be able to initiate leg extension from the guard player, it is important that you fold their knees close to their body. Once you feel that they try to extend the leg, it becomes easier to move to the side and extend the legs to expose the hip of your opponent.

However, if you are up against someone who has active hips always framing and looking at your direction, that’s when you have to switch your strategy. The hand on hip toreando is a good way to stop the opponent’s hip from looking towards your direction.

But does the grip by the hip always answer the hip activity of your opponent? On most occasions, it does the job in delaying the person at the bottom from lifting his or her hip. But there are adjustments that the passer can do to optimize the grips and to make recovery harder for the guard player. For instance, it is possible to drop your forehead on your opponent’s chest or torso. As you extend your leg as far away from the guard player’s body, you have your tripod position with your head and legs making everything heavy for the person at the bottom.

The toreando passing sequence can work well with those who have good scrambles. In fact, a lot of guard passers are waiting for their opponent to start going on their knees to recover their position. The moment the hip goes up to try and recover, the guard passer has the opportunity to go all the way to the back. With control of the pants, it makes it harder for the person to land on both knees while you will be able to reach the back first.

One of the biggest problems that people encounter whenever they do a toreando pass is when they are dealing with someone with a flexible guard. Having the far leg in front of your chest is a common scenario that can make finishing the toreando pass difficult.

There are different ways on how to deal with flexible guards. One, you can switch both grips on the bottom leg of the opponent and simply lift it up in a deadlift motion. This will reset the guard player’s hip to the center and could weaken his or her guard recovery. Another option is to not target the side mount whenever you are doing a guard pass but go for a north-south position. This will be too far for the legs to recover.

Proper Way to Finish the Toreando

One of the biggest problems for beginners, whenever they are doing a toreando pass, is that the person gets his knee to his chest. The bottom leg always gets involved whenever they almost bypassed the legs of their opponent.

A common mistake committed by beginners is to let go of the bottom leg prematurely whenever they are passing. What the passer should do is to pass the grip on the bottom leg whenever they are going for a cross face. Abandoning the bottom leg grip and switching to a crossface will only give enough room for a good guard player to recover and reset the position. Though you might be awarded an advantage for this attempt if done in an actual competition setting, it would’ve been better if you can get a three points for completing the pass.

The goal is to always keep the knee and the chest separated, thus you need to make sure that you have a grip by the bottom of the leg until you already have a secure cross face. At times, you don’t even have the chance to go for a crossface on side mount because the opponent is always facing. In this situation, your grip by the bottom leg will make it difficult for the person to switch back on his or her knees.

The toreando passing sequence has a lot of subtle details given the complexity of the guards that we have today in modern jiujitsu. However, it is a good entry-level pass that can be learned by someone who just discovered the sport. The rationale behind the toreando is also something that can translate to more complicated passing sequences. And also, the toreando pass is more than just a straightforward pass. It can also be combined with other passes such as a knee cut pass or a leg drag.

Modern Jiu-Jitsu legend Bruno Frazatto is one of the most active competitors of his generation and has paved the way for many young rising stars in BJJ.

In his first-ever English-language instructional series, Bruno Frazatto expertly teaches you his favourite guard crossing techniques. These battle-tested guard passes are basic elements in his overall game and have helped him consolidate his legacy as one of the best featherweights in the history of Brazilian Jiu-Jitsu. In addition to technique, he talks about timing, strategies and concepts that will help you improve your passing skills.

The FULL GUARD PASSING ENCYCLOPEDIA is divided into chapters so that it is easy to follow and navigate. Free your guard passing inner beast!

Check out the instructional at Digitsu today and save 10% off when you use the code ATBK10.