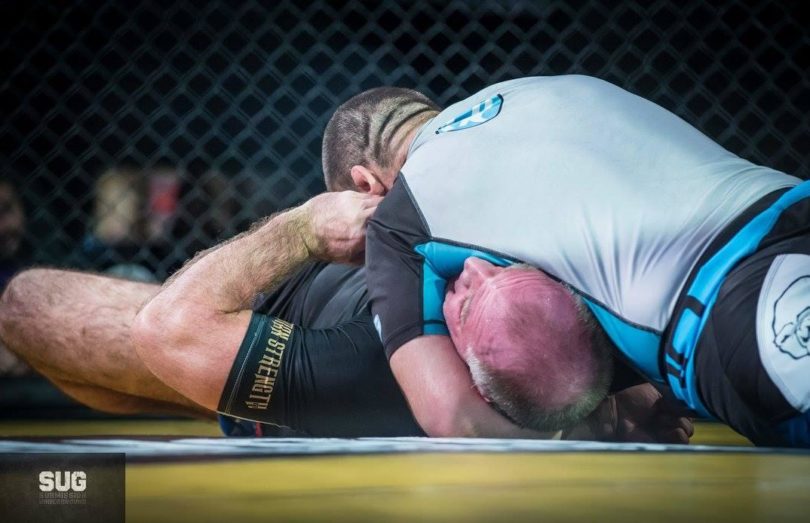 Okay, so the D’arce didn’t work, what can we do? If we can get our opponent onto their back, we can have the perfect set up for a North-South choke. The North-South choke tends to be an underutilized finish, but it can be perfectly set up from a failed D’arce attempt.

Getting Them On Their Back

A common defense for the D’arce choke is to post off the floor with the arm that is trapped. This creates a frame, allowing space, making it difficult, or impossible to finish the choke. Instead of forcing your opponent’s arm straight, and trying to lock up the D’arce again, take advantage of their reaction, and get them on their back.

Now connect your other hand that’s under the body to form a Gable grip. Squeeze your elbows in. Some people prefer an S-grip. The type of grip used will come down to preference, but the important thing to remember is the placement.

For either grip the placement will be the same, the hand over top, or against the head, will be supinated.

This lock on the head and arm is a great position for controlling your opponent. It can be used for the start of another D’arce attempt, the set up to a Peruvian Necktie, or to place your opponent on their back.

This set up will usually cause your opponent to get to the Turtle position, as to avoid another D’arce. When they do, it is important to get hip to hip with them. From here it will be very easy to throw your opponent to their back.

Pull the head in tight to your body, and push your shoulder forward, they should flip over fairly simple. Imagine trying to throw a heavy sandbag from you shoulder. The movement is similar.

Setting Up The Choke

The beautiful thing about this transition is that it brings you right into the North-South position. Also, your choking arm will already be in place. But, in order to set up the choke we must first eliminate the arm from our original set up.

Sometimes people will like to lock up their arms around you to give themselves some control from the bottom position. This makes it difficult when trying to apply a proper North-South choke. If you already have the head trapped between your ribcage and arm, sink your body back.

With your other arm, create a base away from your opponent to help you shimmy your way down. Flatten out, and you may be able to finish the choke with one hand.

If not, draw your knee in, the one that is on the side where the arm is trapped, up to that arm. Use you knee to apply pressure to your opponent’s arms, and disconnect them. If they are not connected, using your knee will create the space necessary to remove your hand, from no longer being blocked.

Now, with your free hand, push down your opponent’s arm, and press it tight to their body. Walk your hand down so you are pressing their forearm to the side of their body. This eliminates any potential reapplication of their defense with that arm.

Chances are that your opponent won’t simply be allowing you to perform this choke with ease, so they will have their chin tucked in, and will be facing towards your body. In order to finish this choke, we need our opponent’s head turned so they are facing the ceiling.

Some people are more stubborn then others when it comes to accomplishing this task, however there is an effective way to turn our opponent’s head. In the North-South position, our hips are facing the mat, or in other words, down towards the mat.

We need to switch our hips so our hips face away from our opponent. Now, walk straight out, and away from your opponent. This seems counterproductive, but what it does is it places your ribcage on the correct side of their head.

There is a small pocket in which you will feel your opponent’s chin fall into when you do this. Learning to feel the position of your opponent’s head with your ribs is essential to finishing this choke.

You should now be back to being parallel with your opponent, or looking like a straight line. Continue to sink your body away from them. The goal is to become completely flat to the floor.

The flatter you are, the tighter the choke. With this concept, you should be able to accomplish this choke with one hand. Though a second-hand helps.

So, with your other hand, simply connect with either a guillotine grip over the choking hand, or if there isn’t any room to connect that grip, go choking hand palm down, and connect your other hand palm up. Make sure to keep your head in tight, and out from between your opponent’s arm.

There is a possibility for a “South-North” choke counter here from the bottom player, if you aren’t careful. Also, do not have your head up leaving them space to create frames, and push you away, ultimately ending in you losing the position you worked for.

Again, the goal is to be flat to the mat. Then, simply squeeze.

When done correctly the North-South choke is vicious, and using a failed D’arce to set it up is a slick and smooth transition, making you a bigger threat to your opponents. Add this set up to your chain of attacks from the D’arce, and get the tap from your next opponent.

My name is Jake, and I train at Steel MMA in San Diego, CA. I am currently a blue belt in Brazilian Jiu-Jitsu. Aside from training Jiu-Jitsu I enjoy boxing and Muay Thai. I love reading, and writing. I currently write fiction and non-fiction, including essays. When I can, I enjoy going camping, shooting archery, and just being in nature.