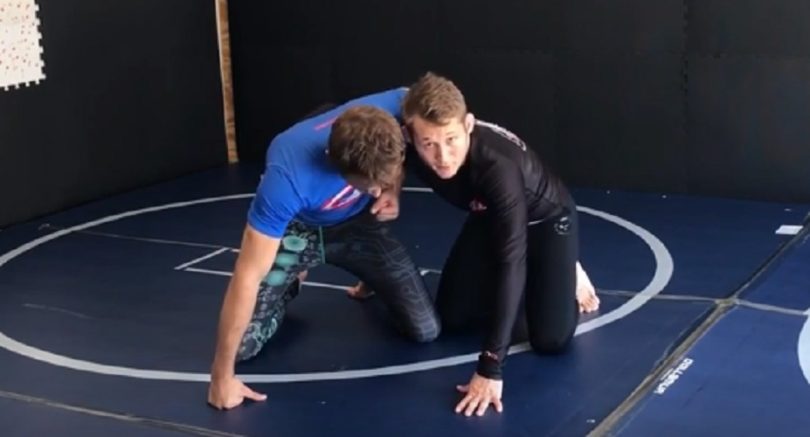 When you think of the “dogfight” position, you think of a fierce head-to-head scramble. It is a 50/50 position where the more aggressive player should win the fight. In Jiu-Jitsu, technique is king, and when one can be clever in the “dogfight” they will come out on top.

I had the wonderful opportunity to work with Richie “Boogeyman” Martinez this last week and he was going over this same position from the Z-Guard. So, that’s where we’ll start.

The knee shield should not be across your opponent’s stomach, nor too shallow across your opponent’s chest. If it is, they can easily either smash down on your shield, or push your knee through, and get chest to chest to start their pass. Instead, your knee should be deep into their pectoral muscle, and you same side arm should post on their opposite shoulder. This simple frame gives you the great advantage of controlling their entire shoulder line.

That cross-shoulder frame, we’ll call it, should have your hand on or over their shoulder, and your elbow high across their neck and collarbone. With your ground-side hand, block the crook of their elbow on that same side arm. This frame will prevent them from cross-facing you.

After you have established a proper Z-Guard, shoot for an under-hook on the side you have your knee shield on. As you remove your knee shield, shoot your leg through, at the same time, that same side arm will come under their arm, and around their back. Your ear should be tight to their stomach.

One simple sweep we have from this position is a double leg. If your opponent decides to stay on their knees, post out with your outside foot, and drive into your opponent. Draw your hands towards their outside leg, and get the takedown.

What will usually happen is, as we go for this, your opponent will counter by posting their outside leg as well, and prevent the easy takedown. When this happens, the position becomes somewhat of a stalemate.

First, take the hand that is around your opponent’s back, and bring it up to where their neck is. Now you are going to sweep them the opposite way. So instead of the double-leg, you will take them over you. To do this, take your outside hand and make a C-grip on their outside leg, the one they are using to post off of. With your hand on the trap/neck area, you will simply fall onto your outside hip, and use that C-grip to carry your opponent over you.

Use that grip then to continue pushing your opponent, assuring their leg position is away from you. You will find that because your other hand adjusted from behind their back, to their neck, that your arm is not stuck. Follow the sweep all the way and you will end up in side control.

Say, we didn’t go for these sweeps, or perhaps your opponent was too sturdy and you simply could not take them either direction. Or, maybe you want to just hit a submission they won’t see coming. From this dogfight position, you can hit a really slick triangle.

To hit the triangle from the dogfight, first move your hand from their back to their trap/neck area again, like before. In order to pull this off, you need to make your opponent carry your weight. Make sure you lean in to your opponent, and give them good pressure. Now, lift your inside leg over and on top of their back. Think of it like a dog pissing on a fire hydrant.

Now, because your opponent is carrying your weight, their outside arm will be holding both yours, and their weight, immobilizing it from defending the submission. Post your outside hand off the ground, and like a sit through, shoot your leg out in front of you and your opponent. Bring your leg to the other side of your opponent’s head, and grab your shin with your hand that was on their neck. The quicker you can fall to the ground, the better.

To lock up the triangle, use your leg that was on their back, and place your foot on your opponent’s hip. Push off with that foot, and adjust your angle so you are looking into your opponent’s ear. Your other leg should be straight across your opponent’s shoulders. Lock your foot and ankle so your toes are pointing towards the ceiling. Now throw your leg over your ankle.

If their arm is still on the same side of their body, lift your hips up, use a two-on-one grip on the trapped arm, and bring their arm across their face. With their arm in place, place both hands on the back of your opponent’s head, squeeze your thighs, and push your hips up towards the ceiling. This will get the tap.

Try this move out this week, and become better in the scramble!

My name is Jake, and I train at Steel MMA in San Diego, CA. I am currently a blue belt in Brazilian Jiu-Jitsu. Aside from training Jiu-Jitsu I enjoy boxing and Muay Thai. I love reading, and writing. I currently write fiction and non-fiction, including essays. When I can, I enjoy going camping, shooting archery, and just being in nature.