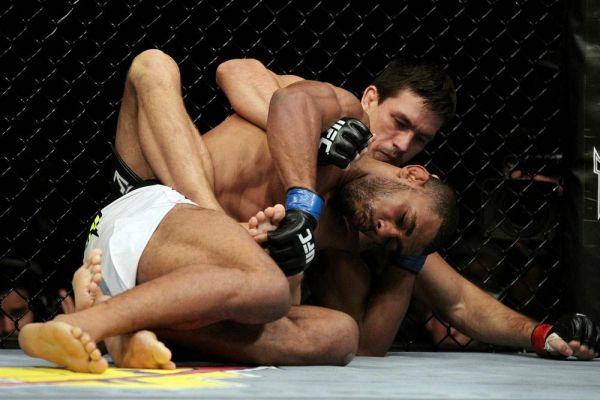 One of the reasons that the UFC is such an exciting spectacle is that there are many different styles and disciplines used to achieve success. There are the knockout specialists with a background in kickboxing who earn their stripes through their striking, and of course, there are the mat grapplers who use their teaching to tire out their opponents on the ground with the hope of winning via submission.

Many UFC champions new and old have earned their glory courtesy of their Brazilian jiu-jitsu background, and it’s no coincidence that grapplers with exceptional mat skills have gone on to become MMA’s own Hall of Famers.

The legendary Royce Gracie led the way, winning his first eleven fights in the newly-formed UFC via a number of different submission holds, and since then many have taken a similar path to the top.

So who are the best exponents of Brazilian jiu-jitsu in the brand’s history?

While no stranger to a stand-up brawl, Nate Diaz is better known as one of the finest jiu-jitsu artists in the UFC.

He is a second degree black belt, earned under the tutelage of Cesar Gracie, so it’s no surprise that eleven of his twenty wins in the organization have come via submission – including the rear-naked choke which saw him defeat Conor McGregor in one of the franchise’s most widely-watched fights in history.

It seems as though Diaz’s UFC career may be over following defeat to Jorge Masvidal last time out, but the welterweight leaves a fine legacy as one of the most effective martial artists in the history of the company.

Although he tasted defeat to Max Holloway in the main event of UFC 231, there can be no doubting Brian Ortega’s credentials as a fighter to be feared. He may have lost that night, but at just 29 and with only 16 bouts to his name, there is still plenty of time for Ortega to dominate the featherweight division with his devastating grappling.

Learning his craft under Rorion Gracie at the family’s school in California and eventually earning his black belt, Ortega won his first seven UFC fights with three of those victories coming by virtue of his own unique take on the guillotine choke.

While not the most active of fighters in the UFC, Tony Ferguson is now on an unbeaten streak that has lasted nearly seven years.

Some martial artists rely on their sheer physical prowess for their success, but Ferguson can be described as a ‘thinking’ fighter – aided by being a black belt in 10th Planet Jiu-Jitsu under Eddie Bravo.

The American has scored a number of victories with his patented version of the D’Arce chokehold, and he retains his position as one of the most dangerous men in the UFC to this day. He is set to face Justin Gaethje in UFC 249 in a fight where he is seen as the clear favourite in the MMA betting odds offered by the sportsbooks, which would extend his already impressive unbeaten run.

What happens when you take a 250lb man and arm him with the skillset that earns him a second degree black belt in Brazilian jiu-jitsu?

You get a very dangerous animal indeed, and Fabricio Werdum is something of a rarity in the UFC heavyweight division in that he is as comfortable on the mat as he is standing toe-to-toe.

His triangle armbar on Fedor Emelianenko earned him the Submission of the Year award in Strikeforce back in 2010, and after signing up for the UFC it took the Brazilian just five fights to be crowned the heavyweight champion. Werdum went on to defeat the likes of Cain Velasquez and Mark Hunt before losing his title to the outstanding Stipe Miocic.

Born in Sao Paolo, Demian Maia has trained in Brazilian Jiu-Jitsu ever since his teenage years and is now a fourth-degree black belt in the art.

Those theoretical skills have been put to excellent use in the Octagon, and he has climbed to the top of the rankings in both the middleweight and welterweight divisions – losing out in title fights to Anderson Silva and Tyron Woodley.

Ten of his wins with the organization have come via submission, and there have been bouts in which you can visibly see his opponents doing everything they can not to go to ground against the Brazilian grappling machine.

With eight victories via rear-naked choke, Maia undoubtedly deserves his place – along with the other contenders – on this list of the finest Brazilian jiu-jitsu exponents in the UFC.