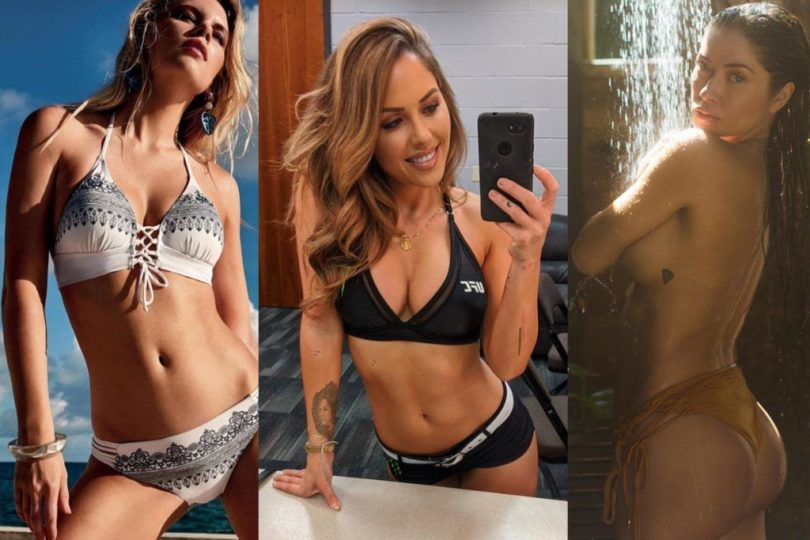 If you’ve ever organized a UFC event, you certainly didn’t miss the presence in the ring of the famous Octagon Girls of the organization. These are my picks for Dana White’s hottest ring girls.

Chrissy Blair has a warm place in the hearts of many UFC fans. This gorgeous blonde is originally from Florida and is widely regarded as one of the hottest ring girls the company has ever had (maybe even the hottest). Dana White’s company brought her into the mix in 2013 – Chrissy was a Strikeforce ring girl before joining the UFC.

Chrissy has a great modelling career to boast of, having been published in all the major magazines (with photoshoots for GUESS, Sports Illustrated and Maxim). UFC fans don’t have to worry about Chrissy leaving, she seems to really enjoy her work with the UFC!

You can’t have a conversation about the hottest UFC Rings Girls of all time without including Arianny Celeste. The 34-year-old beauty hails from Las Vegas, Nevada and has been with the UFC since 2006.

Arianny has won “UFC Ring Girl of the Year” six times (if you count, that’s a record). It’s hard to find a more accomplished ring girl in the MMA world.

Arianny has graced the covers of FHM, Sports Illustrated, Maxim and even Playboy. She has also been very involved in charity – during the COVID-19 pandemic, she launched a GoFundMe for protective equipment for hospitals in the United States of America.

At this point in her career, it would not be a mistake to call Brittney Palmer a UFC legend. It sounds like she’s been with the company for ages and Brittney has been an important asset as the UFC’s popularity has grown.

Brittney has won the “Ringcard Girl of the Year” award twice, and she may be the most famous UFC ring girl of all time. Although she has been widely criticized for her recent plastic surgeries, her popularity among UFC fans has not diminished much.

She has also had great success in her modeling career; Brittney is one of the few UFC Ring Girls to have been featured on the cover of Playboy (2012). Brittney has also worked with major publications including FHM and Maxim. In numerous interviews, she has spoken about her passion for painting and art.

MMA fans around the world miss Edith Labelle, as the former UFC Ring Girl is no longer active with Dana White’s company. Even so, her presence next to the Octagon is the one UFC fans remember fondly. Edith was at the UFC for almost 2 years, from November 2007 to UFC 100 in 2009.

Edith’s departure from the UFC is shrouded in mystery. There are many rumours as to why Dana White fired her after UFC 100, some more credible than others. Fortunately, Edith fell on her feet after this incident. She has managed to build a successful acting career since her days at UFC. These days you can find her working for European MMA organisation Cage Warriors.

Carly Baker is known to be the first European Ring Girl of the UFC. She has managed to win the hearts of UFC fans with her stunning looks and fun personality.

Her constant television appearances, as well as her successful modeling career, have given her a huge influence on social media. She has over 200,000 subscribers on Instagram.

Carly likes to keep busy outside the octagon. Her hobbies include yoga, pilates, Muay Thai and dance. It’s cool to see that she’s one of the few girls to practice martial arts.

Carly is a former contestant who has an impressive performance in the Miss Britain pageant. She is also a much appreciated personal trainer.

A post shared by Kyle And Natasha Kingsbury (@livingwiththekingsburys) on Sep 26, 2019 at 6:52am PDT

Although Natasha Wicks did not spend much time with Dana White’s company, her impact was certainly memorable. Her stunning looks helped her win the Maxim UFC Octagon Girl Search in 2009, and she signed her UFC contract around the UFC 100.

Her departure from the company was controversial at the time, but we can’t forget her beautiful presence alongside the Octagon.

Even though she had a very successful modelling career, Natasha Wicks is not a one-trick pony. She is an excellent athlete and runner who has participated in collegiate sports. Natasha is married to Kyle Kingsbury and they have a beautiful family together.

Old school fans will remember Logan Stanton, even though he hasn’t been part of the UFC for over a decade. Many UFC fans have described her as “the cutest octagonal girl” we’ve ever seen with Dana White, and it’s easy to see why.

She was released alongside Natasha Wicks in December 2009, surrounding a controversy when the two released statements explaining how a UFC fighter was “faking” her injuries.

Like most UFC Rings Girls, Logan has managed to build a successful modeling career outside the Octagon. She enjoys Italian food, wine and yoghurt.

Tito Ortiz certainly hit the jackpot when he started dating Amber Nichole-Miller. The gorgeous blonde started her modeling career at MGM Mirage Resorts and is one of the most beautiful women Dana White’s company has ever hired.

Amber has no hesitation in exposing her well-sculpted body on social networks, which has helped her gain popularity on Instagram. Appearances in GQ, Maxim and Muscle & Fitness have also contributed to her celebrity status. Outside of modeling, Amber is also an actress.

Jhenny Andrade is one of the few girls in the UFC ring in Brazil, and has won the UFC “Ring Girl of the Year” award three times.

Outside of the octagon, Jhenny is known to be a passionate writer. She has written articles for VIP magazine for almost 7 years, including her popular column “Perfect Girlfriend”. You may also know her from dating former Barcelona FC player Neymar.

Unlike some of her colleagues, Holly Madison did not achieve fame because of her involvement in the UFC. She first came on the scene with several appearances in Playboy.

This gorgeous blonde hottie appeared as a UFC Ring Girl celebrity at UFC 100, and although she didn’t become a regular in Dana White’s company, her appearance certainly turned heads.

Holly’s story is actually really interesting. She was one of Hugh Hefner’s girlfriends in her youth, until she broke up with him in 2008. She was his “number one girl” at one point!

Holly is passionate about her advocacy for animal welfare. She has posed more than once for PETA’s anti-fur ads.

Rachelle Leah is an absolute UFC Ring Girl legend. She started her modeling career at just 18 years old and just a year later, the UFC signed her.

She has been very active with UFC – in addition to her octagonal duties, she has also promoted the UFC brand on television shows such as The Ultimate Fighter, Inside the UFC and Women of Action.

Rachelle is one of the few UFC Ring Girls to have appeared in Playboy (in 2008). She has also been featured in FHM, Maxim, Muscle & Fitness and AXL. She was also the host of Randy Couture’s MMA Athletics.

Although no longer active on the MMA scene, Summer Daniels’ stays with Bellator and UFC have left a strong impression on MMA fans. Her career on the edge of the ring was a dream come true, but recently her attention has been drawn away from the MMA world.

Summer’s successful modeling career has surpassed the octagon as a top priority. She is passionate about singing and writing. Her Twitter and Instagram feeds showcase her incredible sense of humor and you’ll really appreciate her publications.