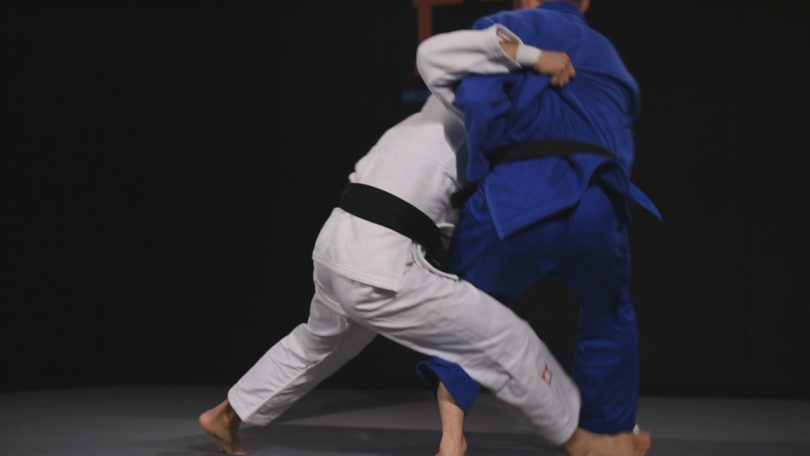 The Tani Otoshi, otherwise known as Valley drop, is one of the 40 throws that was originally made by Jigoro Kano. This throw is also part of Kodokan Judo‘s official 67 throws. The nature of the Tani Otoshi involves both the Uke and the Tori falling together making it a Sute mi waza or a sacrifice technique. The basic description for this move is to get the Uke down to the mat by scooping up the opponent’s leg. However, it isn’t as simple as that.

How to Perform the Tani Otoshi

There are different ways how you can finish an opponent using a Tani Otoshi. The basic way to do it starts with your regular collar and sleeve grip. The off-balancing happens when you circle your uke towards the side. Some prefer to do it on the side where they have the collar grip since a lot of opponents are usually right-handed. The reason for this is that a posting hand on the collar can be enough to stop your entry.

From here, you will have to bend your knee to lower your base while continuously twisting the gi towards the side where you are planning to fall. Also remember that your knee should be pointed outward and the Tori will then fall to the side while scooping the leg of the uke.

Alternative to Taking Someone’s Back

In Brazilian Jiu Jitsu competitions, the Tani Otoshi is something that you will also see a lot. There are instances when taking someone’s back looked impossible with the opponent defending the back take well. Instead, you can grab the opponent’s leg and simply just fall on the mat.

A good example of this is when Rafa Mendes faced Tanquinho during the 2013 World finals. Coming from a 50/50 sequence, both men were neither conceding, and that’s when Tanquinho had the opportunity to almost take Rafa Mendes’ back. With dying seconds in the match, Tanquinho transitioned towards a perfectly executed Tani Otoshi.

There were videos of opponents breaking their knee when they don’t know how to react when someone jumps to closed guard. But with Tani Otoshi? Is it that dangerous? In reality, yes, it has the potential to break someone’s knee. Some people sit instead of just dropping to their side increasing the injury to their uke.

To lessen the chances of injuries, the uke needs to know when to concede the throw. He or she should know how to perform a proper break fall. And also, the tori should understand the dynamics of the Tani Otoshi. It isn’t designed to make the uke’s knee to bend. Instead, you are simply blocking the entire side of the uke and you are using your entire weight to take him or her to the ground.

Next, it is also important for the uke to execute the throw when he or she is close to the uke’s side. It means that there should be no space. It makes it easier to drag the opponent to the mat if you are latched to the uke.

As for the Tori, you can potentially injure your knee if you don’t point your foot and your knee outward. There is a chance that a bigger opponent could crush your kneecap causing injuries.

Getting to the uke’s side to perform Tani Otoshi is quite difficut. Getting to this position alone is already next to impossible especially when dealing with someone who has a good understanding of judo. To make Tani Otoshi work, it is important to have different setups for it.

Instead of stepping on the same side where you plan on hitting the move, you can do a cross-step as if you are doing a shallow Osoto Gari. From here, you can get the back leg to go all the way at the back of your opponent’s heel.

Another option is to do a cross sleeve grip. Instead of grabbing the same side collar and the same side sleeve. You can opt to dominate the cross sleeve grip. Next, you want the sleeve to cross your centerline. This can be easier said than done especially when you are dealing with a strong opponent. Once you have a grip of the sleeve, you can get your other hand to grab by the armpit to drive the arm across your centerline. From here, you can grab the waist and get your body close to your uke. You can also simply extend your leg and drop to your side to complete the move.

How to Combine Other Throws with Tani Otoshi?

It is a good idea that you combine your attacks when you are using this type of sacrifice throw. You can combine it with different foot techniques to initiate the opponent to react allowing you to get closer to the uke’s side.

You can initiate different throws as a way to distract the opponent and get to your opponent’s side. You can start things with foot techniques such as a Kouchi Gari testing if he is even going to move his hips back making it difficult to finish a Tani Otoshi. Osoto Gari is a good initial attack before you complete the Tani Otoshi simply because you are close to the side when you do the kuzushi for this throw.