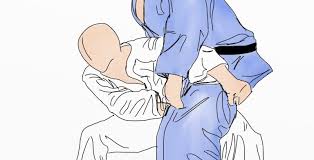 Sukui Nage is a throw that has been banned by the International Judo Federation in 2010. Translated as a scooping throw, the Sukui Nage is one of the forty original throws developed by Jigoro Kano. It is also currently listed as part of the 67 throws of the Kodokan Judo. Considered as a Te-Waza or a hand technique, this move has been banned since grabbing the legs is no longer allowed in judo tournaments.

Sukui Nage is somewhat similar to a high crotch or single leg in wrestling. To give you an idea on how this move is performed, it involves grabbing the uke around his legs from the side. The other hand grabs either by the waist or towards the leg. To complete the throw, the tori will then perform a scooping motion to drop the uke on the mat.

There are two popular variations for the Sukui Nage. You have the old Sukui Nage used during the earlier years of judo and you have the modern variant that is more commonly seen in different tournaments today.

How to do a Sukui Nage

The traditional method will end up having the left hand grabbing by the hamstring of the left leg of the uke while the right-hand grabs below the knee of the right leg. The tori finishes the move by lifting the opponent and dropping him or her on the mat.

There is a different variant that is more commonly seen in a modern judo tournament. The initial setup is the same. However, once you end up in the same position as performing a Sumi Gaeshi, the left hand will be holding the near leg as if doing a high crotch in wrestling. The other arm will maintain grabbing the collar.

What makes this variant a good option is the fact that you have control over both the legs and the upper body. It is also more efficient for a lot of judokas since they will not have to change a lot of grips whenever they are executing the Sukui Nage. The only grip change will be the one that will grab the leg. The collar grip is also important in this variation because you get to circle the uke in the air to get him or her on the mat.

Typical Counter to the Sukui Nage

Once you are on the side, it is a common reaction by the uke to create a separation pushing your shoulder of the tori to ensure that your chest isn’t going to connect to the side of his or her body. This will prevent you from having a deep grip on his or her leg. Once a small space has been made, it is also easier to outpower the arms by doing a heavy leg and the uke gets to maintain his or her base and has a chance to recover and recenter.

So what’s a possible reaction to this counter? If the rule allows the grabbing of legs, it is possible to pick up the ankle and bring the leg to your bicep like a cradle. This will still allow the tori to get closer and finish a Sukui Nage. In some instances, right before the uke gets his or her foot back on the mat, it is possible to switch to the other side and do the Suki Nage on the other side.

Alternate Setup for the Sukui Nage

Another alternate setup whenever you are doing a Sukui Nage is to make use of wrestling single leg setup on your attack. With the same collar and tricep grip, here, you get to step on the side and kneel to pick up the leg and resume your Sukui Nage attack.

Also, it is possible to go straight with a double leg takedown before you go to switch towards the side and finish the move with a Sukui Nage instead.

There are common problems that you could address whenever you are doing the move. For instance, setting up the move to get to a position where you are on the side and almost on your opponent’s back is harder than what it looks.

For instance, cutting the distance is a problem especially when the opponent is also grabbing by the collar. It becomes easier to stiff-arm and create space between the tori and the uke. It becomes easier if you can actively break the grips of your opponent. Also, you can nullify these grips if you are going to be circling the opponent making him or her step to one side. This makes it easier to get closer especially if the uke is going to step on the wrong side, or the side where you are planning the Sukui Nage. Foot sweeps are also important to mix your attacks and be able to get to the side easier.

Another common problem that a lot of novice judokas encounter for this move is that they lift using their back to scoop their opponent. This can increase the chances of injury. The tori can strain his or her back, especially when lifting a heavier opponent.  It is important to bend your knees and to make sure that you are going to straighten your back. The hip hinge is an important concept whenever you are going to scoop an opponent up. This can lessen the chances of injury and even make your Sukui Nage more effective.